When Lieutenant Adam Dickie was killed in action at Messines in June 1917, his family did not know until they read the news in the papers. Adam Dickie is the “A Dicky” remembered on the original Stanthorpe War Memorial. Adam, the son of Joanna Reid, of “Brookland”, Ballandean, was born in Stevenston, Ayrshire, Scotland.  Two years after arriving in Australia, Adam enlisted to fight in World War I. He joined the 41st Battalion and died in the fighting at the Battle of Messines on 10 June 1917. Unfortunately, his family was not informed of his death and read of it in the Brisbane Courier casualty list. 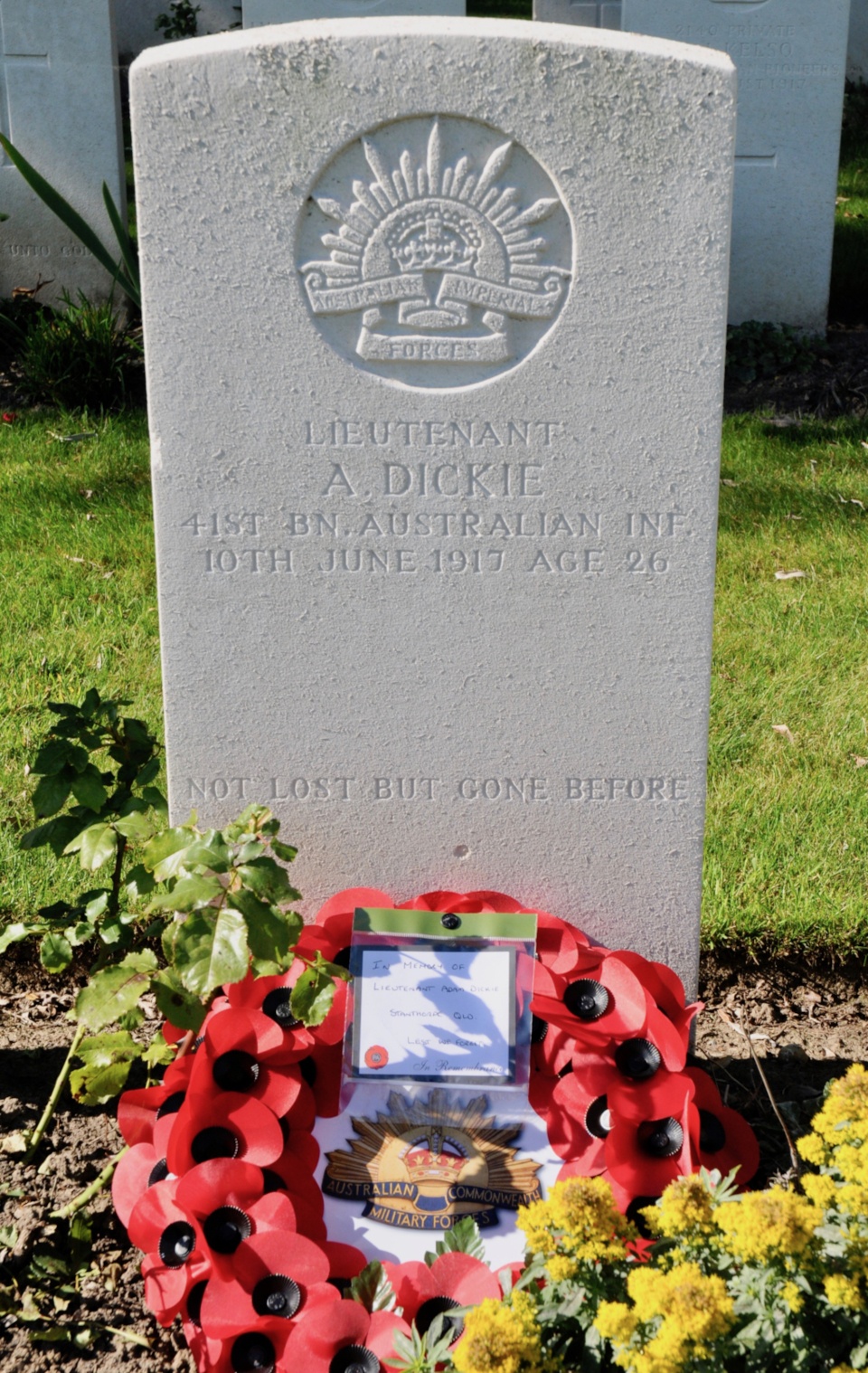 Adam Dickie was educated at Irvine Royal Academy and studied law at Glasgow University. He qualified as a solicitor entitled to practice in the Supreme Court of Scotland. In 1913, Adam and his family migrated to Australia.

Adam worked as a solicitor in Toowoomba and before enlisting was a selector, living at Augathella, Queensland.  He enlisted on 13 October 1915 and was appointed Second Lieutenant.  He was allotted to A Company of the 41st Battalion and left Sydney on active service on 18 May 1916 aboard HMAT Demosthenes.

The 41st Battalion, as part of the Australian 3rd Division, reached Plymouth, England, on 20 July. Members of the battalion’s intelligence staff wrote the book The Forty-First and described what it meant for Australian troops to see England for the first time.

Most of us belonged to the second or third generation of Australians, but no Englishmen could feel more greatly thrilled with the pride in belonging to the race which had produced so may illustrious men, compatriots of our forebears, who made our Empire the greatest on earth, some of whom, we knew had sailed in little cockle-shells, from that very port of Plymouth, to win fresh glories for their beloved England. (MacGibbon 1919, 17)

From Plymouth, the battalion moved by train to the Lark Hill Camp on the Salisbury Plain. There, the battalion undertook months of intensive training including bayonet fighting, trench-digging, musketry practices as well as many route marches. Their stay at Lark Hill was so long, that when the 3rd Division left for the front, it was considered the best-trained Overseas Division leaving England for France. (MacGibbon 1919, 18)

Adam left Southampton for France with the 41st Battalion on the night of 24 November. After spending several weeks training at Bailleul, the battalion moved to the front line trenches at Armentieres on Christmas Eve, a week after Adam had been promoted to Lieutenant.

The battalion spent the winter months moving in and out of the front line at Armentieres. The only infantry actions undertaken were raids on the enemy trenches where the objectives were to capture prisoners and to find out details of the German regiments facing the Australians.

The 41st Battalion’s first major operation was the attack on the Messines Ridge on 7 June 1917.  In the days preceding the attack, the battalion was in the front line assisting the Australian 9th and 10th Brigades to prepare for battle. The Allied bombardment drew a heavy retaliation from the Germans, including high explosive and gas shells, that cost the battalion more than 20 casualties a day. (MacGibbon 1919, 45)

The battalion was relieved by the assaulting battalions of the 9th and 10th Brigades at 2am on 7 June and moved to the support areas. On 10 June the soldiers of the 41st Battalion were billeted in the Catacombs, a vast series of dug-outs tunnelled into Hill 63 near Messines, that accommodated around 2,000 men. From the Catacombs, the battalion provided carrying parties to move rations, ammunition, and engineer’s materials to the new front line. The War Diary of the 41st Battalion shows that while providing carrying parties on 10 and 11 June, one officer and four other ranks were killed in action.

The officer killed was 26-year-old Lieutenant Adam Dickie, who was buried at the River Douve Cemetery, 2.5km north-west of Messines. The book, The Forty-First, said:

Amongst our glorious dead, who lie on the slopes of Messines are Lieutenants A. Dickie, T.G. Taylor, G.C.C. Wilson, and L. Wellings. (MacGibbon 1919, 50)

Somehow the Australian Army failed to inform the Dickie family of Adam’s death. His brother, John, stumbled on the news in the Brisbane Courier casualty lists on 3 July and sent a telegram the next day to the Base Records Office in Melbourne. John wrote that the family had received no official information and asked whether the news of Adam’s death was correct.

The Officer in Charge of Base Records replied the same day:

I regret to state that Lieutenant Adam Dickie, 41st Battalion, is reported as having been killed in action on 10/6/17. This information was communicated to the Military Commandant, Victoria Barracks, Brisbane, Q., on 22nd ultimo, for transmission to the next-of-kin, shown on the records as Mother. Later official advice giving further details will, on receipt, be promptly transmitted to next-of-kin. 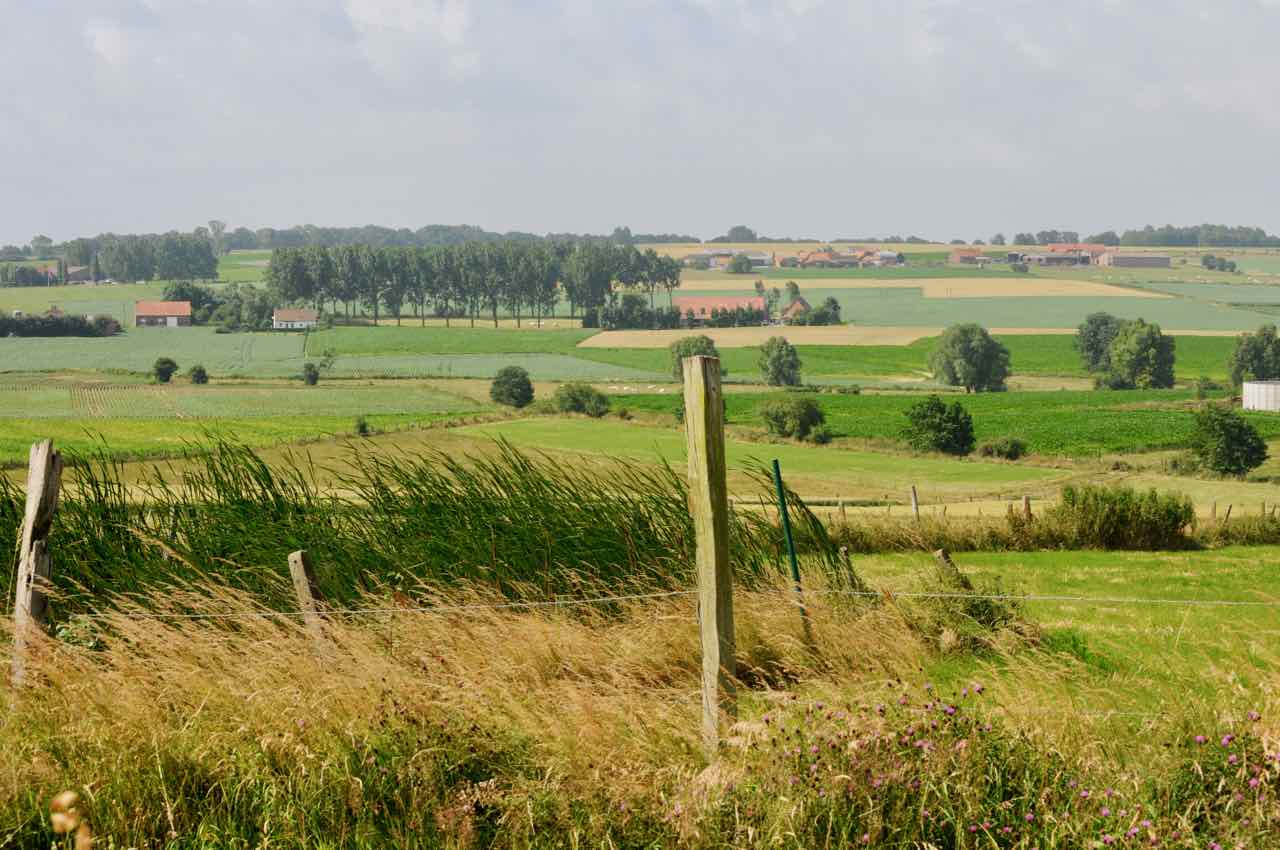 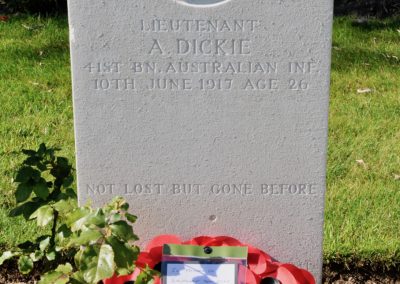 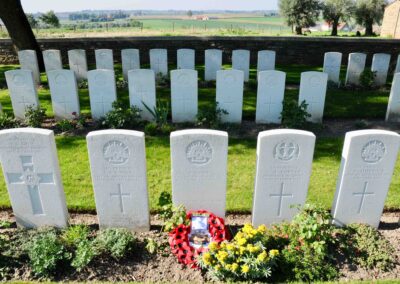 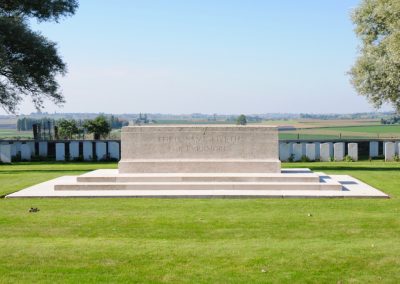 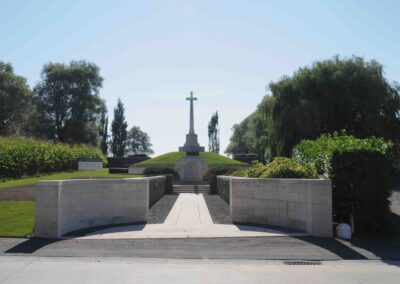 On Monday last news was received in Stanthorpe of the death of Lieutenant Adam Dickie, who was killed in action in France.  Lieutenant Dickie is a son of Mrs Reid, of Ballandean, and there are many friends in the district who will regret to hear of his death.  Lieutenant Dickie left Australia about a year ago for the front to take his part in the Empire’s struggle, and it is to be deplored that such a fine specimen of manhood should be cut off so early in his career.  He was a solicitor by profession and for a considerable time connected with the firm Hamilton & Hamilton, of Toowoomba.  Much sympathy will be felt for his mother and other relatives.

The Dickie family faced further trauma when Adam’s youngest brother, Robert, was severely wounded while fighting in France in October 1917. His left leg was amputated above the knee the following month in a hospital in England.

The Dickie family received news of Robert’s injury via a telegram from Scotland. John Dickie wrote to Base Records seeking confirmation of Robert’s wounds, stating,

The news regarding my late brother, Lieutenant Adam Dickie appeared in the Courier Casualty List, without my mother, next-of-kin, previously notified. You will understand I dreaded a repetition of that blunder in the present case.

Robert returned to Australia in April 1918.

In 1920, Lieutenant Adam Dickie was re-interred in the Messines Ridge British Cemetery. The epitaph on his gravestone reads:

NOT LOST BUT GONE BEFORE

In 1922, Joanna Reid wrote to the Officer in Charge of Base Records to say that she now lived at Kooroongarra via Millmerran. She had received a Memorial Scroll and Kings Message for which she gave sincere thanks and wrote:

I do not require anything in writing to remind me of my dear departed son Lieutenant Adam Dickie, as he is seldom out of my thoughts. And after a few patient years one home shall take us all in.

MacGibbon, Lieutenant Frederick William (Editor) (1919).  The Forty-First. Compiled by Members of the Intelligence Staff. No place. No publisher. Possibly printed in France, In the Field.

Messines Ridge In The Direction Of The Advance By II ANZAC Corps.