THE BATTLE OF POZIERES

The Allied infantry began its attack during the Battle of the Somme, by exploding 19 mines under the German lines on 1 July 1916. Despite the devastation caused by the mines, the German soldiers emerged from their dugouts and manned their machine gun posts to defend against the advancing Allied infantry. The attack quickly turned into a full-blown disaster as the British troops were cut down by machine gun and rifle fire. By the end of the first day, the British Army had suffered 57,470 casualties, including 19,240 killed, the greatest loss in a single day in its history (Pedersen 2012, 5).

The planned Allied breakthrough did not materialize and the Battle of the Somme degenerated into an exercise of grinding attrition. Estimates of total casualties vary widely, but by the time the Battle of the Somme had ground to a halt with the onset of winter in November 1916, more than one million men had been killed or wounded.

On 7 July, the Australian 1st and 2nd Divisions and the newly arrived 4th Division were ordered to the Somme. The 5th Division remained in French Flanders where it would it would fight about two weeks later in what has become known as the Battle of Fromelles. Fromelles was a microcosm of the bigger disaster taking place on the Somme.

The fight at Fromelles was a short, sharp incident… that deceived its own people, not the Germans, and shook the faith of its soldiers… faith which might have been of great value… but of all the great battles of the next two and a half years, the fight that now lay ahead of the 1st, 2nd, and 4th Divisions, then marching up to the Somme Battle, was in several ways the hardest experienced by the First A.I.F. (Bean 1946, 237).

The village of Pozieres, on the ridge of a broad plateau, occupied one of the highest points of the Somme battlefield. During 1915 and 1916 the Germans had turned Pozieres into an immensely strong position – a virtual fortress. Between 13 and 17 July, the British infantry made four vain and terribly costly attacks on Pozieres, the final one after a sustained bombardment that reduced the ruined village to rubble (Laffin 1992, 87).

The Australian 1st Division moved to the Somme frontline on 19 July and was ordered to attack Pozieres on 23 July. At 12.30am the artillery barrage lifted and the first wave of Australians set off. They made steady progress and, despite fierce resistance, captured the lines of German trenches that were their main objectives.

Many of the German garrison were killed or captured; others fled or withdrew to the northern end of the village (Bean 1946, 242).

Through heavy fighting, including a “Herculean bombfight” the Australians moved through the village positions on 24 July (Bean 1948, 247). Once the Germans became aware they were losing the village, they heavily bombarded the area to inflict damage and loss on the 1st Division (Pedersen 2012, 40). The German bombardment increased on 25 July as they prepared their final attempt to retake the village. The German counterattack, however, did not eventuate “after many reports the task was hopeless” (Bean 1946, 247).

Private John “Jack” Swaysland, of Stanthorpe, died in action during the attack by the 9th Battalion on 23 July. He has no known grave but is remembered with honour on the wall of the Australian National Memorial at Villers-Bretonneux, France.

The German artillery fire was incessant and in three days the 1st Division lost 5,285 officers and men, the rest were exhausted. (Laffin 1992, 88) 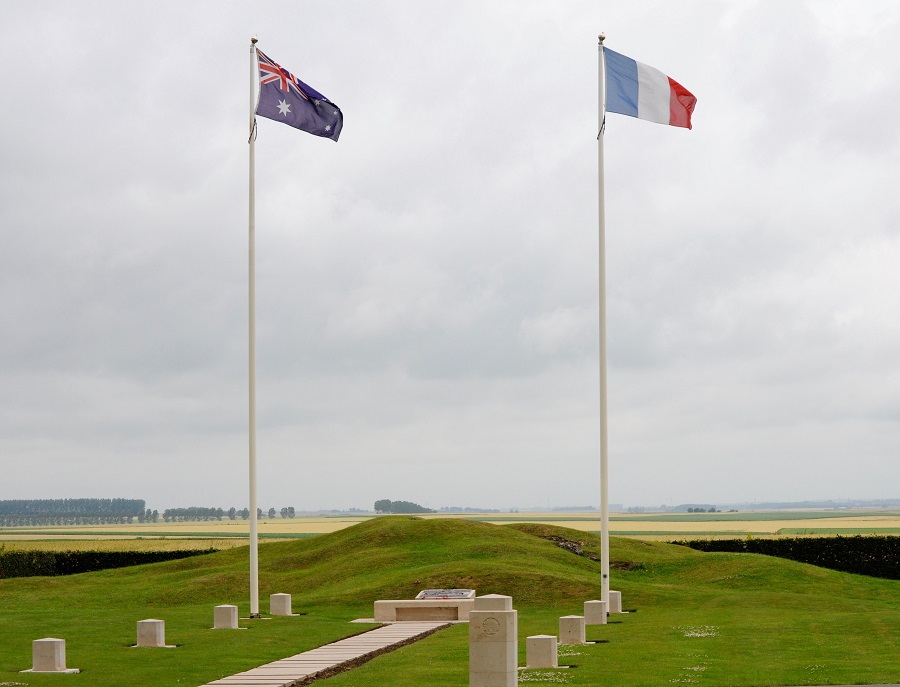 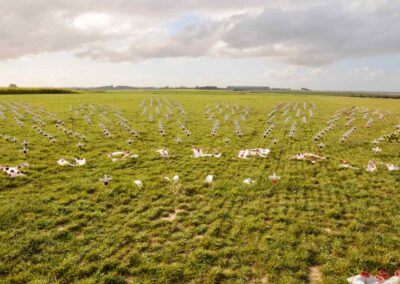 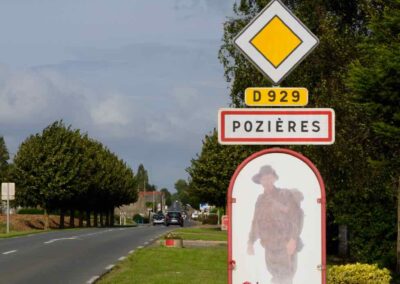 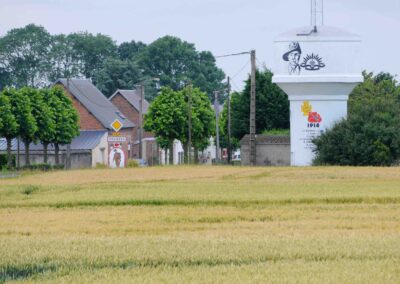 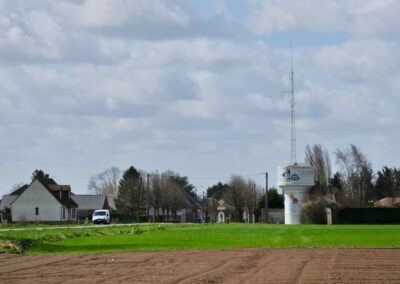 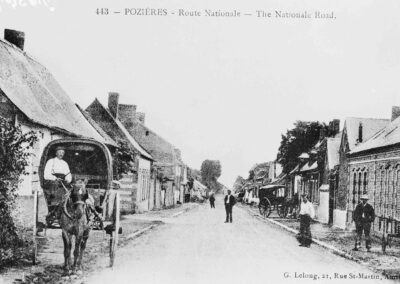 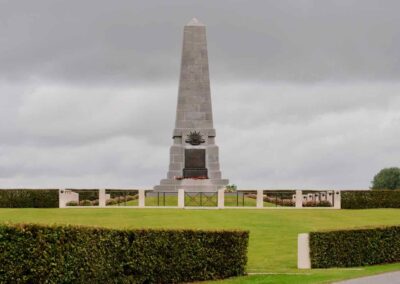 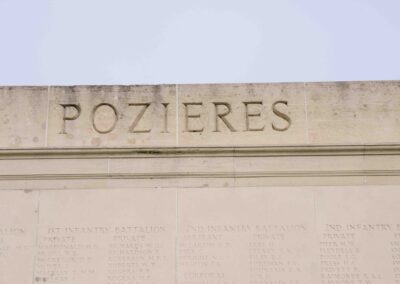 The Australian 2nd Division then took over the frontline from the 1st Division.

Despite the 2nd Division having been at the front only since 27 July, it was ordered to undertake its first assault just after midnight on the 29 July (Pedersen 2012, 41). The attack failed because of poor planning, costing the lives of 3,500 men. The 7th Brigade was particularly hard hit as it tried to push onto the summit and “the low mound of the tumbled windmill”. (Bean 1946, 253)  The village of Pozieres was

by this time, little more than an expanse of desert, pounded by shell-burst after shell-burst that the powdered debris of houses and earth was spread like ashes six feet deep over the surface. (Bean 1948, 250)

Private Patrick “Paddy” Hyde of Stanthorpe was killed in the attack by the 7th Brigade on 29 July. Paddy, too, has no known grave but is also remembered with honour on the Australian National Memorial at Villers-Bretonneux.

The next attack was planned for 2 August, but by then, more than 1.5km of new trenches had been dug, narrowing the distance across no-man’s land. Believing the Australian troops were assembling for an attack, the Germans launched a relentless artillery barrage making the trench digging

one of the most terrible tasks undertaken by the A.I.F. Men were buried as they worked, were dug out, and buried again (Bean 1948, 254).

The attack was postponed until 4 August when, under cover of the new trenches, the 2nd Division was able to overrun the enemy lines including the old windmill site. The Australians captured the ridge and was for the first time able to look down on the German Army and the unspoiled landscape towards Bapaume some eight kilometres away. In fierce fighting on 5 August, the Germans counter-attacked but the A.I.F. line held at the old windmill (Bean 1946, 255).

Before this could happen, the remaining troops of the 2nd Division and the newly arrived 4th Division endured on the night of 6 August the worst German artillery shelling of the campaign. The Germans were ordered to re-take the Pozieres ridge “at any cost” (Bean 1946, 256). At 4am on 7 August, the enemy attacked the Australian lines, capturing some of the forward trenches and dugouts. The German counterattack was turned back due to the heroic efforts of the Australians. Lieutenant Albert Jacka, arguably Australia’s most famous soldier of World War I, was instrumental in retaking the ground lost to the Germans in the early fighting.

Following the failure of the German attack on 7 August, the 4th Division concentrated its advance northwards along the Pozieres ridge towards the high ground of Thiepval. To reach Thiepval, the Australians had to take the fortress that was Mouquet Farm, where the Germans had built strong fortifications under the ruins of the old farm buildings. The Australians pushed forward along the narrow front, openly exposed at times to direct machine gun and artillery fire. Between 8 and 21 August the 4th Division, under the most appalling conditions, launched a series of attacks against the German stronghold at Mouquet Farm.

After 27 August, heavy rain turned the Pozieres battlefield into a quagmire (Pedersen 2012, 45) The 4th Division launched a series of successful attacks against objectives including Mouquet Farm. Each time ground was taken, but a lack of troop numbers meant holding these gains was impossible against the inevitable German counter attacks. On 3 September, the Australian 13th Brigade attacked and captured most of Mouquet Farm.

After fierce fighting both above the ground and in the deep passages below the Farm, it was thrown out of the Farm itself; but north-east of the Farm it clung to part of Fabeck trench and other posts (Bean 1946, 262).

In its last two terrible days at Pozieres, the 4th Division was joined in the fighting by the Canadian Corps. On 5 September, the Canadians relieved the Australian positions but by then the 4th Division had lost another 1,346 men. The surviving Australian troops left the battlefield to join their comrades now recovering at Ypres, Belgium.

In 45 days fighting on the Pozieres ridge, the three Australian divisions launched 19 separate attacks and lost more than 23,000 officers and men (Bean 1946, 264).

In northern France, on the side of the Albert to Bapaume road is the site of an old windmill: one of the most significant landmarks in Australian history. On a raised stone plinth there is an engraved inscription: 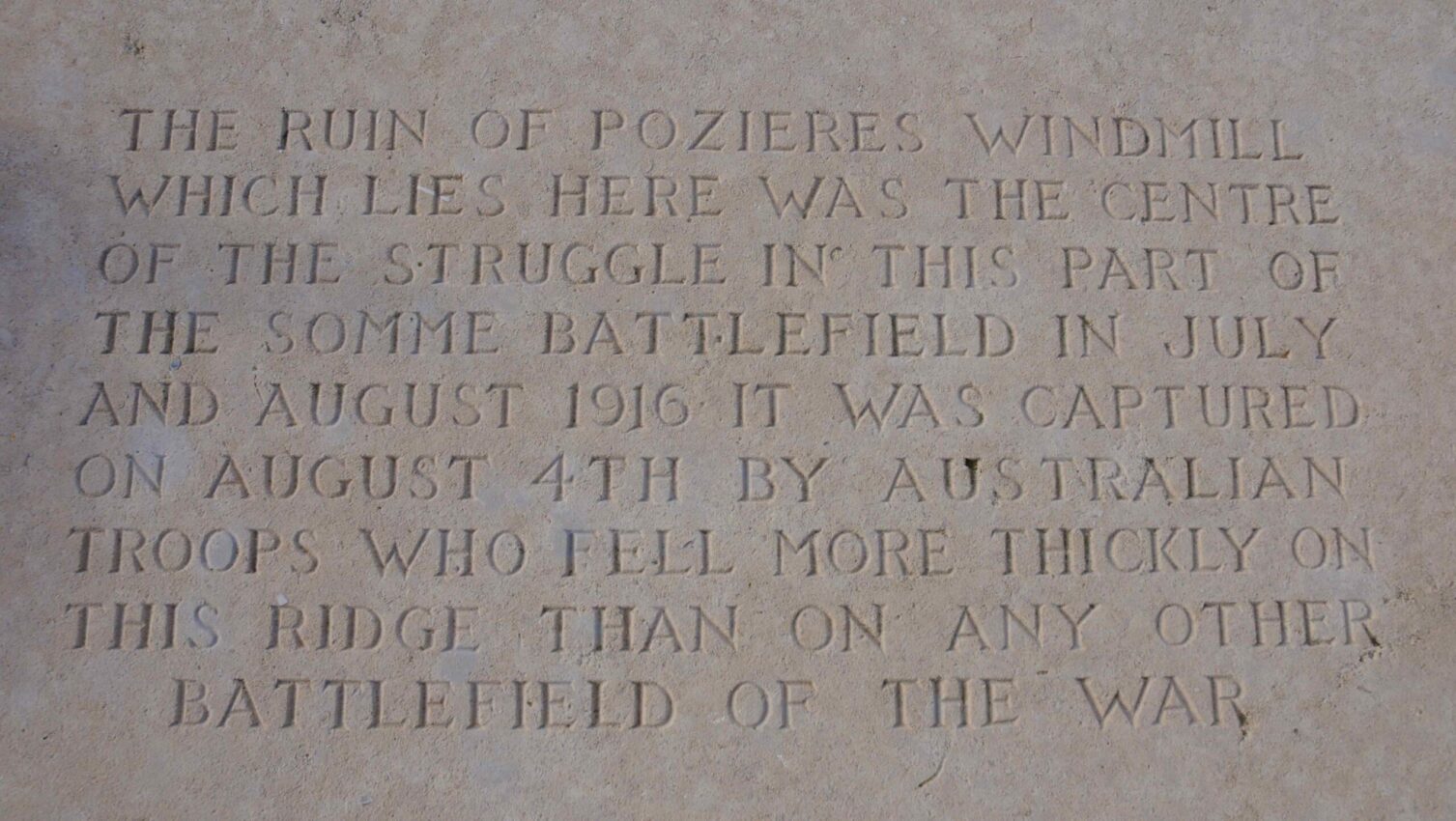 Australian War Memorial Collection EZ0095 : The main street of Pozieres after the heavy bombardment by the British and the Germans.

Australian War Memorial Collection G01534G : A pre-war photograph of the village of Pozieres looking along the main road through the village.