THE BATTLE OF FROMELLES (FLEURBAIX)

Fleurbaix, a siding on the Amiens Branch Railway, commemorates the battle in which the 5th Division of the Australian Imperial Force (A.I.F.) was destroyed as a fighting force. It is now remembered as the Battle of Fromelles.

The attacking troops were not familiar with Fromelles itself because it was in German hands; for them the nearest village was Fleurbaix which stood behind their own lines. For a long time afterwards many would refer to the events about to unfold as the battle of Fleurbaix, but eventually the name of Fromelles stuck and today it is by that name that the battle is known. (Burness, 2008)

The Australian 5th Division entered the front line near Fromelles on 10 July 1916.  This small village 16km west of the city of Lille in Northern France became the site of the A.I.F.’s first major battle on the Western Front.

It could not have been a worse start; the battle plan was described by Brigadier General Harold “Pompey” Elliott, Australian commander of the 15th Brigade, as

a wretched, hybrid scheme, which might well be termed a tactical abortion (Elliott 1930, 2).

The British Commander Lieutenant General Sir Richard Haking devised a plan for the 5th Australian and the 61st British Divisions, both recent arrivals in France, to capture the German positions along the high ground around Fromelles. The attack was originally intended to be a “pretended attack or feint” designed to hold the German troops in position at Fromelles (Lindsay 2008, 72). The British High Command hoped the attack would stop German reserve troops moving southward to support defences in the Battle of the Somme that had been raging since 1 July.

To put things in perspective, at this stage only half of the Australian troops had actually seen the front line – and they had only been there for two days. (Lindsay 2008, 74)

The commander of I ANZAC Corps Lieutenant General Birdwood and his Chief of Staff, Brigadier General Brudenell White, protested that the attack would have no real point and would sacrifice lives for no justifiable reason (Lindsay 2008, 77). However, Haking resisted their concerns and, claiming that there would be a “loss of morale owing to postponement”, insisted the attack would proceed as planned (Bean 1940, 349).

As with so many battles of World War I, the Allied soldiers were to advance against strong and established German defences. The German position at Fromelles consisted of wire entanglements protecting a two metre high and six metre deep sandbag wall (Pedersen 2012, 15). The German 6th Bavarian Reserve Division had held this area for over a year, with many of their troops engaged in fighting since the start of the war. Among the German troops defending Fromelles was a 27-year-old despatch runner, Lance Corporal Adolf Hitler.

Originally planned for 17 July, the attack was postponed until 19 July due to heavy rain and mist. Then, at 11am on 19 July the Allied artillery bombardment opened up and so began the Battle of Fromelles.

The Allied bombardment proved to be totally inadequate as

the German fortifications and dug-outs were much deeper, stronger, and less penetrable than their British equivalents. (McMullin 2002, 216)

The bombardment intensified throughout the day and then at 6pm, with some three and a half hours of daylight remaining, the infantry advance began (Bean 1946, 227). The 8th, 14th and 15th Brigades of the 5th Division advanced on a front of 2,400 metres across no man’s land. The British 61st Division was on their right and had responsibility for capturing the heavily guarded Sugar Loaf salient – the site of two unsuccessful British attacks in 1915 that had both resulted in heavy British casualties.

The British 61st Division was caught in the open by the German artillery and machine-gun fire. Their attack on the Sugar Loaf salient failed. The German machine-gunners were then able to focus on the advancing Australian 15th Brigade. 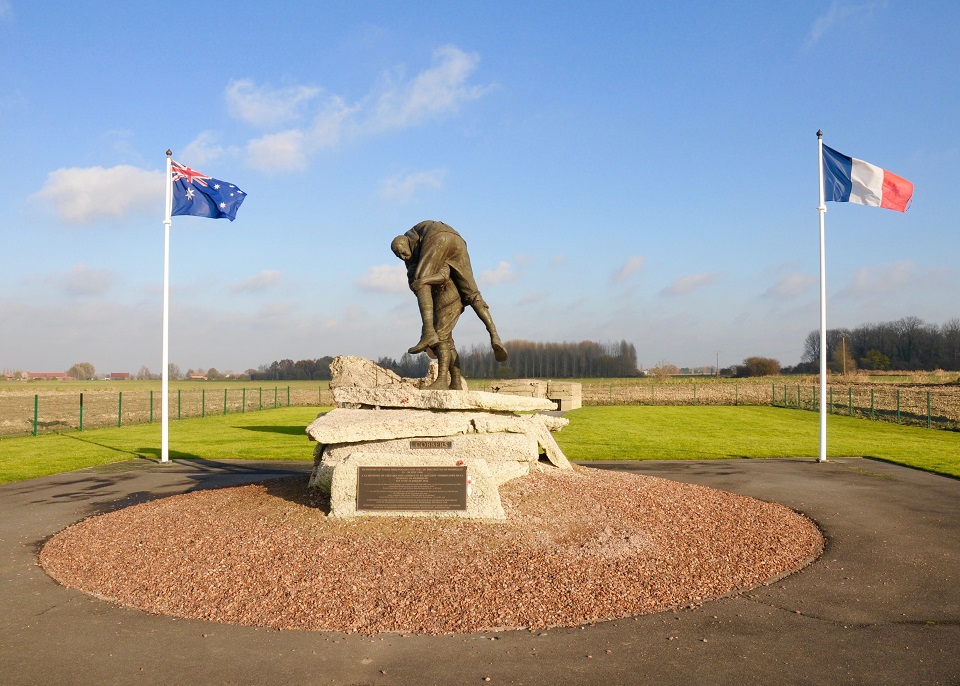 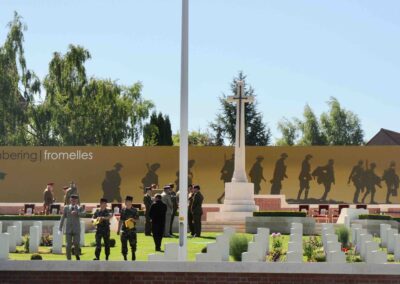 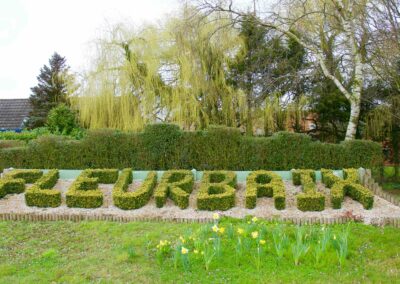 And then the 59th rose, vengeful, with a shout – a thousand as one man. The chattering metallic staccato of the tempest of hell burst in nickelled gusts. Sheaves and streams of bullets swept like whirling knives. There were many corpses hung inert on our wire, but the 59th surged forward, now in silence, more steadily, more precise than on parade. A few yards and there were but two hundred marching on. The rest lay in heaps and bloody swathes. Eighty came back that night. (Downing 1920, 25)

A few Diggers almost reached the enemy wire, the rest were killed or wounded within minutes of the battle’s commencement. The survivors dug in and fought on. (Laffin 1992, 57)

The 8th and 14th Brigades had more success and were able to break through the German front line and move forward to capture the second line. By 7.30pm they held a disjointed position but with both flanks open to counter attack (Pedersen 2012, 18). The German support line they now occupied had long been abandoned and was no more than a muddy ditch.  Standing in knee-deep water, the Australians fought on, at the same time trying to construct sand bag defences.

Reinforcements were sent forward to carry much needed ammunition and bombs but as the hours passed, the Australians steadily lost men to the German counter attacks.  By 2.30am the Germans had overrun what remained of the 8th Brigade and as dawn approached the 14th Brigade’s situation was described as dire (Pedersen 2012,19). The Australian troops were ordered to withdraw. Many died returning across no-man’s land and the survivors arrived back in their trenches to face a scene described by Captain Hugh Knyvett of the 59th battalion:

If you had gathered the stock of a thousand butcher shops, cut it into small pieces and strewn it about, it would give you a faint conception of the shambles those trenches were. (Knyvett 1918, 155)

The 5th Division was destroyed as a fighting formation. Of the 1,917 Australians killed, 1,299 have no known grave. Some 400 Australians were taken prisoner of war.  The 60th Battalion from Victoria went into battle with 887 men but came out with only one officer and 106 men. The 32nd Battalion from South Australia and Western Australia lost 17 officers and 701 men (Laffin 1992, 57). The losses suffered by the British 61st Division were 1,547 men killed or wounded. The German casualties totalled less than 1,500.

I think the attack, although it failed, has done both divisions a great deal of good. (Lindsay 2008, 157)

The British authorities played down the losses at Fromelles. The official communiqué following the attack massively understated the Allied losses.

Yesterday evening, south of Armentières, we carried out some important raids on a front of two miles in which Australian troops took part. About 140 German prisoners were captured. (Lindsay 2008, 151)

The British strategy – which continued until after the war – of covering up the appalling losses may be attributed to the disaster that was unfolding further to the south: the Battle of the Somme. 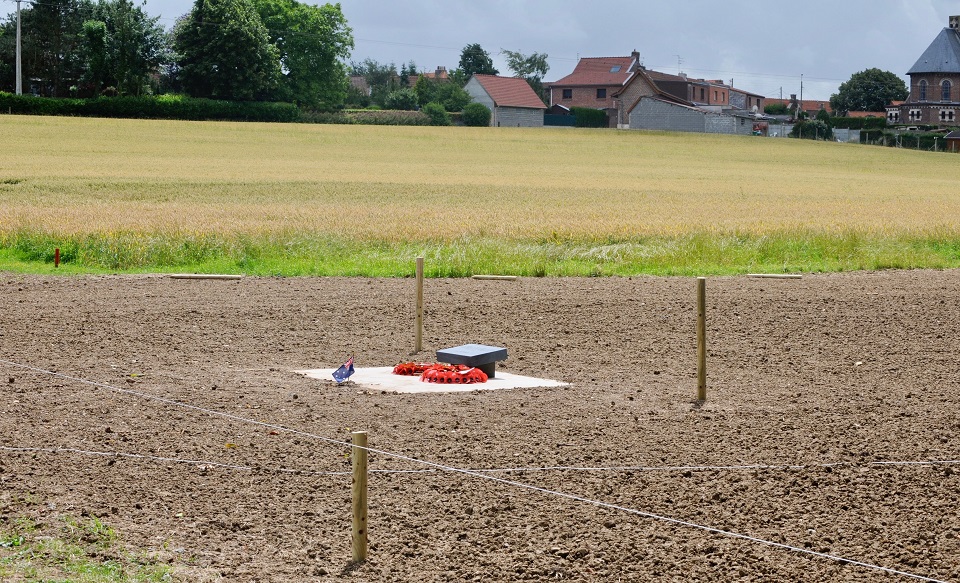 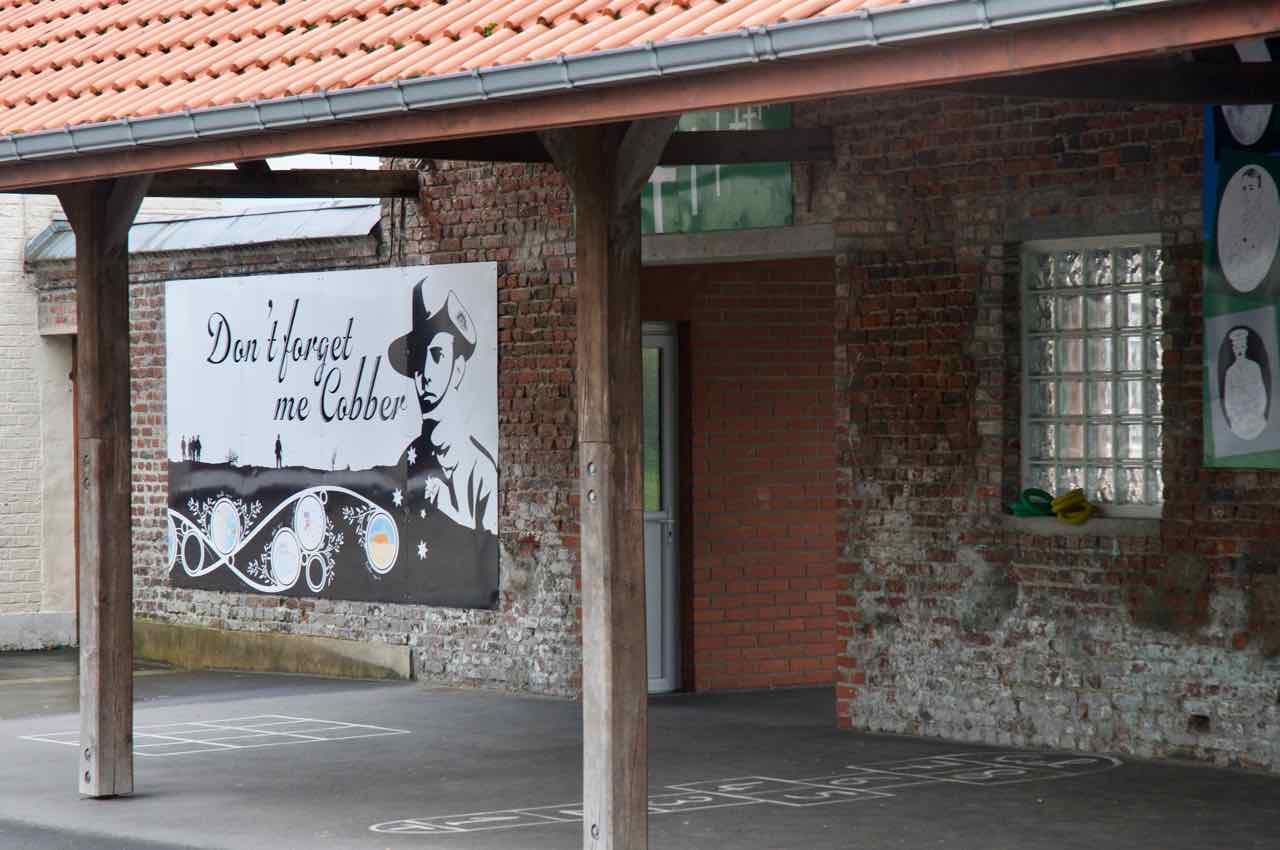 At the VC Corner Australian Cemetery and Memorial, which commemorates the Australian losses at Fromelles, the remains of 410 unidentified Australian soldiers lie beneath two extensive horizontal white crosses. Established in the old no-man’s lands, VC Corner is one of only two all-Australian cemeteries on the Western Front.  The other is Toronto Avenue Cemetery, found within the famous Ploegsteert Wood, south of Messines in Belgium. The names of the 1,299 Australians killed at the Battle of Fromelles but with no known grave are inscribed on the wall at the rear of the VC Corner memorial (Pedersen 2012, 33).

The Australian Memorial Park is a few hundred meters from VC Corner and was opened in July 1998. Set amongst the remains of three German blockhouses, stands the “Cobbers” statue by Melbourne sculptor Peter Corlett. The statue is based on Sergeant Simon Fraser’s response to a wounded soldiers cry of “Don’t forget me, Cobber.” It depicts a soldier from the 57th Battalion carrying a wounded mate from the 60th Battalion (Pedersen 2012, 33).

In 2002, retired Melbourne teacher Lambis Englezos began his fight to prove that Australian soldiers were buried by the Germans in five unmarked pits behind the lines at Fromelles. Relentlessly he pursued his campaign, with some support from the media,  until the Australian government ordered an official inquiry. Following initial archaeological tests at Fromelles in 2008, the main excavation was undertaken in 2009 at which time the remains of 250 Australian and British soldiers were discovered. The soldier’s bodies were exhumed, DNA tested, and reinterred in a new cemetery built nearby for this purpose. This became the first cemetery on the Western Front to be dedicated in 80 years and was named Fromelles (Pheasant Wood) Military Cemetery.

The cemetery was officially dedicated on the 94th anniversary of the battle on 19 July 2010 in a ceremony attended by the Australian Governor-General Quentin Bryce, the Prince of Wales, and the French Minister of State for Defence and Veterans, Hubert Falco. The ceremony was attended also by hundreds of descendants of the 96 missing Australian soldiers then identified by DNA matching. For his service to the community, Lambis Englezos was appointed a Member of the Order of Australia in 2009.

Knyvett, R.H. (1918). “Over There“ With the Australians. 1st edition. London. Hodder and Stroughton.

The Village of Fleurbaix.