THE BATTLE OF PASSCHENDAELE

I died in hell — (They called it Passchendaele)

This immortal line from poet Siegfried Sassoon describes the most infamous battle of World War I. The Battle of Passchendaele is remembered not only for the shocking scale of casualties, but also for the horrendous conditions under which the battle was fought. Ultimately, the battle gained nothing for the Allies.

With the capture of the Messines ridge in June 1917, General Douglas Haig, Commander in Chief of the British forces, had the Allied front line set for the major offensive planned for the summer of 1917. Passchendaele is the name given to a series of 11 consecutive battles fought in the Ypres Salient in Belgium between 31 July and 30 November. They are known also as the Third Battle of Ypres.

General Haig’s plan involved attacking northwest from the Ypres Salient over the Passchendaele ridge and then onto the Belgian coastal ports. John Laffin, in his book Guide to Australian Battlefields of the Western Front, pointed out that references to the “ridges” of the Ypres Salient are misleading, for in the Ypres Salient there is merely low ground and not-so-low ground. The Broodseinde-Passchendaele ridge, rises a maximum of 60 metres over a distance of several kilometres, and so the gradient is barely perceptible (Laffin 1992,23).

Laffin described the horror of the Battle of Passchendaele:

The tremendous bombardments by both sides tore the land to pieces, destroying the intricate drainage system of the flat land. When rain fell the entire battlefield turned into a morass and every shell hole and mine crater filled with water. The only way across the fields of mud was by slatted footways known as duckboards. Many wounded soldiers who toppled into the mud sank and were suffocated. The countless pools of water were full of stinking ooze and bodies or pieces of bodies. Fumes hung around the swamps for days after a gas attack. (Laffin 1992,23)

The Anzac Corps spearheaded five of the 11 great attacks. The loss of life was immense with the five Australian divisions suffering 38,000 casualties in just eight weeks of fighting. Ten men from the Granite Belt were killed in action in the Battle of Passchendaele.

The battle began with an 18-day artillery barrage in which more than three million shells were fired. The first infantry attack began on 31 July when British troops fought their way from Ypres. The first-day objective of advancing 4km was completely unrealistic. General Haig’s flawed plan involved the infantry advancing by more than 80km in just one week. It rained heavily for four days and the British advance became bogged down in the Flanders mud. The offensive was broken off on 4 August and did not continue until the weather improved. The Australian infantry was not heavily engaged in the first attack but the Australian artillery suffered 153 casualties.

In the lead-up to the first Anzac attacks, three men from the Granite Belt died in the Ypres Salient: Private Robert Johnston at Messines, Lance Corporal Walter Potts at Wytchaete, and Private George Hughes at Woodcote House near Ypres.

The battle was resumed once the rain ceased and this time Australian troops joined the attack. I Anzac Corps moved north from the Somme to Belgian Flanders on 28 August. Following a five-day artillery barrage, on 20 September the Australian 1st and 2nd Divisions attacked side by side in the Battle of Menin Road. By then the ground was dry and the Australians were able to advance quickly behind the artillery barrage. They captured all their objectives, including Glencorse Wood and a part of Polygon Wood, but the cost was high. The Australians suffered 5,000 casualties in the Battle of Menin Road (Bean 1946, 367).

Having held their positions in the attack on the Menin Road, the 1st and 2nd Divisions were withdrawn to rest and were relieved by the Australian 4th and 5th Divisions on 22 September. The Australians were then ordered to take the remaining areas of Polygon Wood and the German trenches behind the wood.

The Battle of Polygon Wood began at 5.30am on 26 September with an Allied artillery barrage across a front of 10km. One of the main objectives was a raised earth mound known as Polygon Wood Butte that was used as a rifle range before the war. The Australian divisions attacked across a front of 2.5km and captured their objectives. But, again, the Australian casualties were heavy with the 4th Division suffering 1,717 casualties and the 5th Division 5,471 (Laffin 1992, 36). 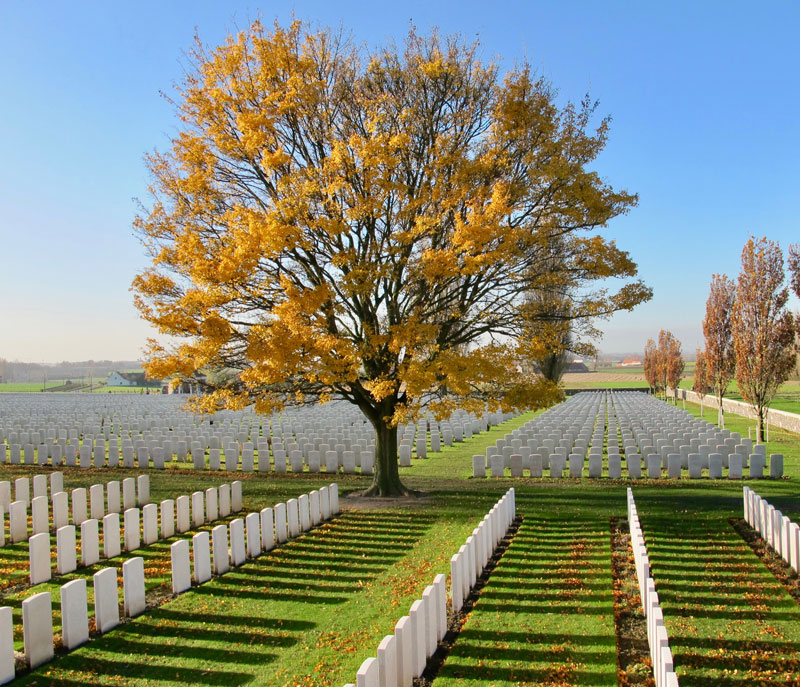 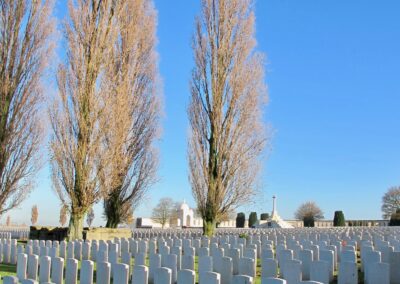 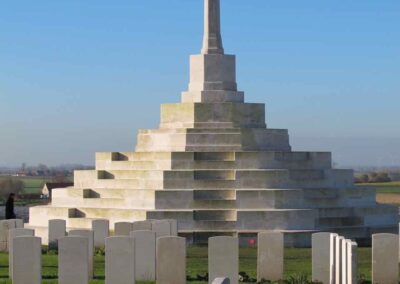 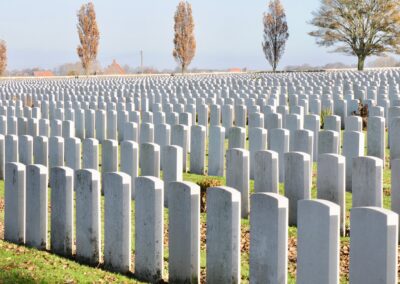 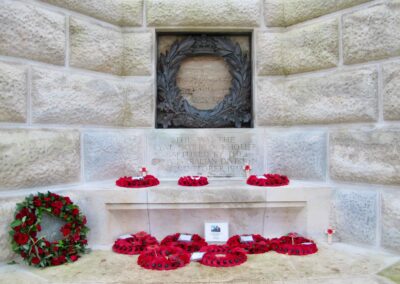 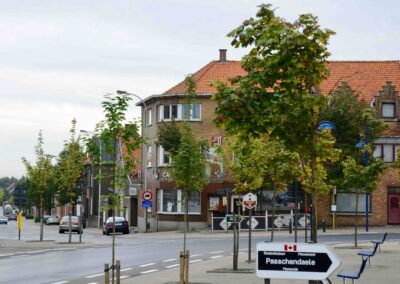 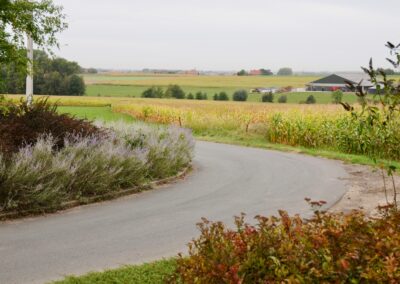 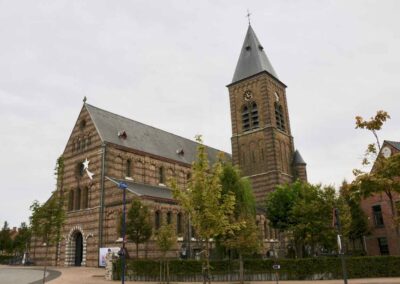 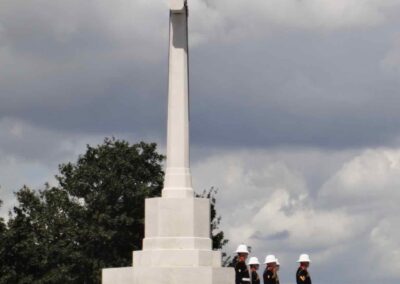 The Battle of Broodseinde Ridge was the Australian’s third battle of the Passchendaele campaign.

It was the most important of the Australians actions of late 1917 and potentially the most decisive. (Laffin 1992, 25)

Following the fighting at Polygon Wood the 1st, 2nd, and 3rd Divisions replaced the 4th and 5th Divisions. Together with the New Zealand Division, the four Anzac divisions, fighting together for the first time, formed the centre of 12 Allied divisions in a line across a 13km front. The objective was the Broodseinde Ridge, which was the German’s main defensive line.

The Allied attack was planned to begin on the morning of 4 October but, unknown to the Allies, the Germans had planned to attack at the same time. The German barrage caught many Australian troops lying out unprotected in their start positions. Once the Allied artillery opened fire, the Australians moved forward and engaged the enemy. In the face of heavy machine-gun fire and a bayonet charge, the German attack broke down. Many Germans were taken prisoner by Australian battalions, with the 37th Battalion alone capturing 420 German prisoners.

The first phase of the fight for Passchendaele village began for the Australians on 9 October when the 2nd Division joined the attack with the British 66th Division. Their objective was the Keiburg Spur from where the Germans controlled the battlefield operations. In a desperate fight, the weakened Australian forces fought their way through the quagmire in the most dreadful weather. Inevitably the Australian attack failed and the troops were forced to withdraw. The 2nd Division suffered 1,253 casualties including Private Stephen Brett, of Thulimbah, who died in the fighting that day.

The second phase of the attack on Passchendaele village began at dawn on 12 October with the 3rd and 4th Divisions fighting alongside the New Zealand Division and five British Divisions. It was still raining heavily and the battlefield was a sea of mud. The combination of mud, heavy gas shelling, and intense machine gun fire from concrete gun emplacements again caused the Anzac attack to fail.

It is believed about 20 men from the Australian 38th Battalion actually reached the Passchendaele Church, but, finding themselves completely isolated, were forced to withdraw to their lines.

Private Alfred Potts, of Stanthorpe, died of wounds he received in the fighting on 12 October. His brother Walter had been killed in action only two months earlier.

Over the next week another four men from the Granite Belt were killed in action in the Ypres Salient. They were Private James Fitzgerald, of Pikedale Station, Corporal Michael O’Connor, of Stanthorpe, Private Cecil Bott, of Spring Creek, and Gunner Ronald Eedy whose mother lived at Ballandean.

The Australians continued fighting until relieved by the Canadian Corps. The Canadians, through a series of operations between 26 October and 10 November, went on to capture Passchendaele. The remaining Australian troops were withdrawn from the battlefield by 14 November.

By the time the Battle of Passchendaele ground to a halt with the onset of winter in mid-November, total Allied casualties were estimated to be 310,000. The German losses were believed to be slightly lower. All that had been achieved was that the Ypres Salient had been widened by a few kilometres. When the Germans launched their great offensive in the spring of 1918, Passchendaele was again lost and the Allies retreated to Ypres where they held the line until the end of the war.

The Village of Passchendaele.