The Australian Journey to the Western Front

The last Australian troops left the Gallipoli peninsula on 20 December 1915, with the entire Anzac fighting force withdrawing without the Turkish forces realising they had departed. The evacuation was achieved with barely a casualty. However, by then the Gallipoli campaign had resulted in terrible losses on all sides. The Australians lost 8,709 men with another 17,924 wounded. Out of a total fighting force of 8,556 men, 2,701 New Zealanders were killed in action and another 4,752 were wounded.

Five men from the Granite Belt died in the Gallipoli campaign and are remembered with honour on the Stanthorpe war memorials. These men are Lance Corporal William Burns, Private William Cammack, Private Thomas Marstella, Trooper William Sharpe, and Private William Shelford.
After leaving Gallipoli, the Australian Imperial Force (A.I.F.) was sent to defend Egypt and the all-important Suez Canal against the threat of attack by the Turkish army.

Since the outbreak of war in August 1914, the British and French troops, holding the Western Front, had suffered severe losses. The Allies’ situation worsened in February 1916 when the Germans began a massive assault upon Verdun in France. With the Allies desperately needing reinforcements, it came as no surprise in March 1916 when the order came to move the A.I.F. from Egypt to the Western Front.

On 19 March, troop ships carrying the 2nd Division arrived in the French port of Marseilles. The 1st Division followed just over a week later. From Marseilles, the Australian troops moved north by train to French Flanders, near Armentieres, which was still in the grip of a wet, cold winter. The A.I.F. was brought to French Flanders, a quiet sector known as “the nursery” where new divisions were sent

for a quiet introduction, in training for harsher experiences to come (Bean 1946, 196).

By mid-April, the 1st and 2nd Australian Divisions were in the front line southeast of Armentieres. The 4th and 5th Divisions arrived in France from Egypt in June and were followed in November by the 3rd Division from England.

The five divisions of the A.I.F. went on to fight in many great battles on the Western Front in France and Belgium from mid-1916 until the war ended on 11 November 1918. From a population of fewer than five million people, more than 318,000 men embarked from Australia on active service with more than 62,000 losing their lives (Noonan 2014, 62 & 120). It was on the Western Front where 46,000 of these young Australians died and more than 150,000 were wounded. Proportionate to men in the field, the Australian casualty rate was the highest in the British Empire. The New Zealand casualty rate was not far behind (Pedersen, 2013, xxiv). Given the scale of these losses, we understand the view that

the AIF’s spiritual presence in modern Flanders (both Belgian and French) and in Northern France remains significant (Laffin, 1992, 9).

The sites of some of the most significant battles in which the A.I.F. fought on the Western Front live on in the names chosen for railway sidings on the Amiens Branch Railway on the Granite Belt. Thirty of the 39 soldiers whose names appear on the Stanthorpe World War I memorials died on the Western Front. 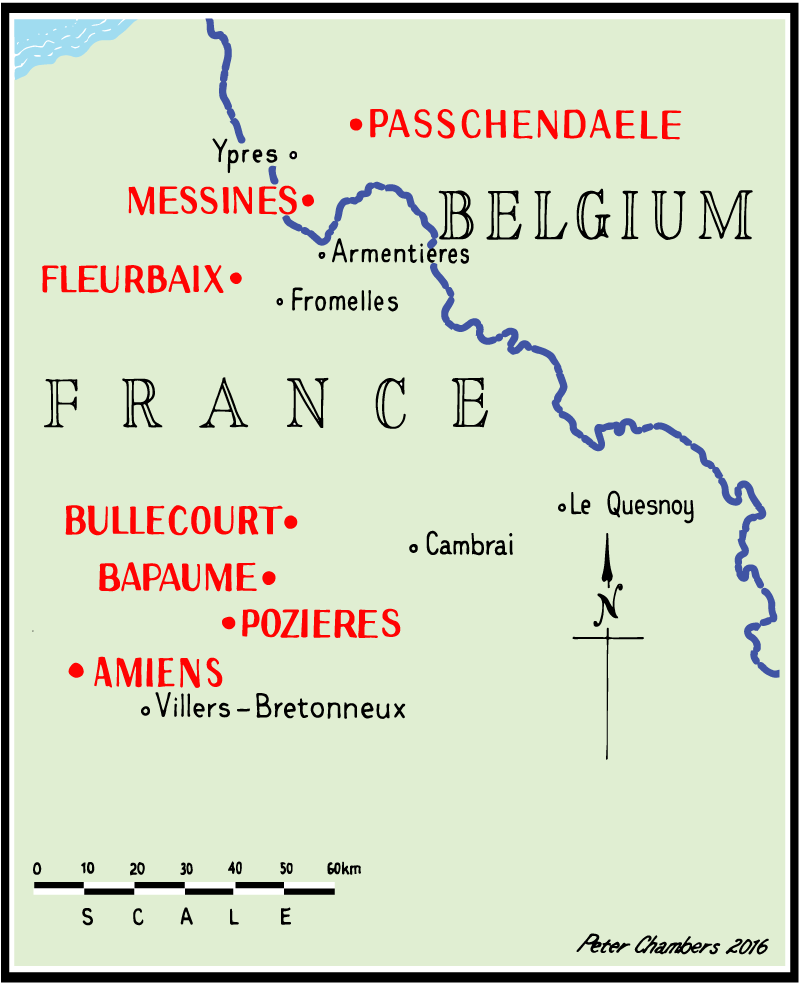 THE BATTLE OF PASSCHENDAELE
31 JULY 1917

The Final Year of Battle
and Amiens