Albert Jolly enlisted in Warwick on 7 February 1916, three days after his 17th birthday. He stated his age was 18 years and three months on the “Application to Enlist” form. It appears his parents, Thomas and Eliza Jane Jolly of “Farnworth”, The Summit, also signed confirming his age. As a result, Albert became one of several thousand Australian boy soldiers who served in World War I. The Australian War Memorial lists 154 “boy soldiers and sailors” as having died in the war. The youngest was 14 years and nine months. Albert is not on this list because, although he was a boy soldier when he enlisted, he was 18 years and two months when he died. 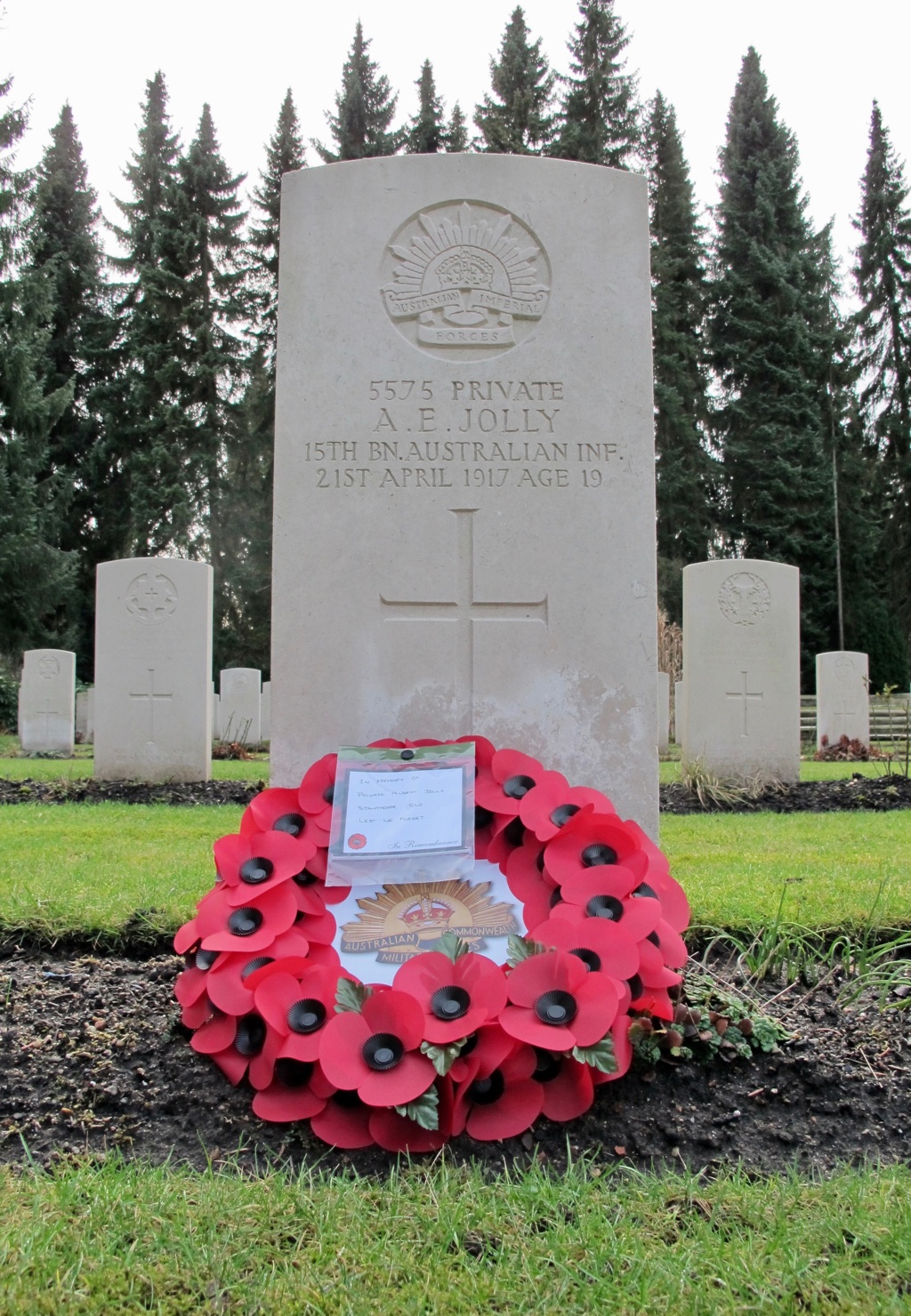 Paul Byrnes in his book, The Lost Boys, wrote about Australian boy soldiers in World War I:

No-one knows how many under-age boys joined the Australian and New Zealand forces, nor how many came back. They fought in every major battle in which the Anzacs took part, but left little trace. Most of their letters are gone, if they wrote them. Few kept a diary, because teenage boys are less inclined to do so, and it was forbidden anyway. Some of them have no known photograph and no known grave. It’s as if they never existed : all the more reason to tell some their stories. (Byrnes 2019, 26)

Albert Jolly joined the 17th Reinforcements of the 15th Battalion. He left Sydney aboard HMT Hawkes Bay, arriving in Egypt on 24 April 1916. He joined his battalion on 27 May before departing for France on 1 June, arriving in Marseilles one week later.

Albert was admitted to hospital on 4 October 1916 suffering from mumps. He became very ill and was transferred to a larger hospital at Etaples, France, on 16 October 1916. He was not discharged from hospital until 9 January 1917 and did not re-join his battalion in the field until 17 February 1917.

Privates Albert Jolly and Edwin Hindmarsh were both from the Granite Belt and fought together in the 15th Battalion. In the First Battle of Bullecourt, they took part in the attack on the Hindenberg Line at Riencourt on 11 April 1917. The 15th Battalion suffered more than 380 casualties in the attack, including Edwin Hindmarsh who was killed in action.

Albert was first reported as missing during the attack on that date, 11 April. Having suffered a severe leg wound, he was captured as a prisoner of war and was taken to the Reserve Lazarette (Hospital) at Verden, near Hanover, in Germany. German military records show that on 21 April, Albert died in hospital and was buried in the Garrison Cemetery at Verden.

Private Thomas Snowdon of Lismore, another soldier from 15th Battalion captured as a prisoner of war at Bullecourt, told the Red Cross:

A.E. Jolly 5575 was wounded in leg at Riencourt on 11th April 1917. He was taken to Verdun [sic] Hospital where his leg was amputated. He died shortly after. He was screaming in bed when Doctor gave him some injection. Was buried at Verden, none of our men were well enough to attend the funeral, but wreath was bought for his grave.

In the Bullecourt affair no less than nine officers were made prisoner of war, all of whom returned to Australia at the termination of hostilities. A large number of the men were also made prisoners at Bullecourt, and the greater proportion of these arrived home safely. Among those who died of wounds in Germany was young Private Albert Jolly of the Lewis Gun Section, and Private Dan Tudor of the same section, who died while working as a prisoner of war in the salt mines of Germany. (Chataway 1948, 174) 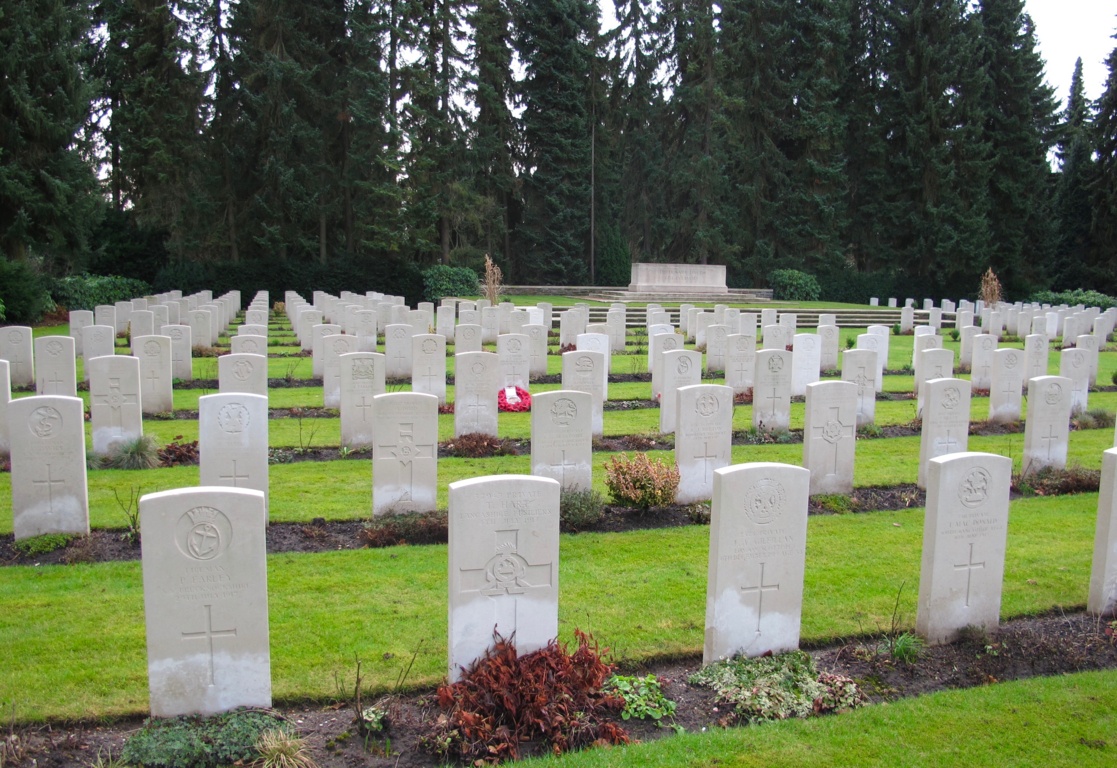 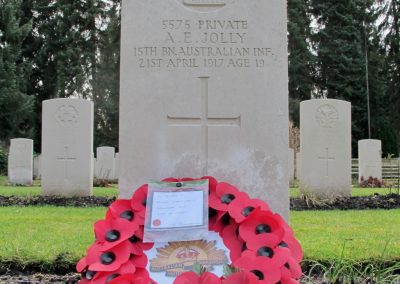 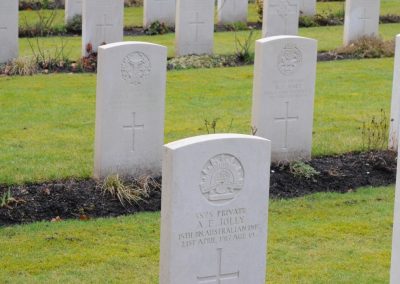 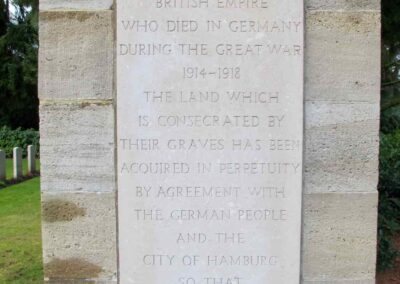 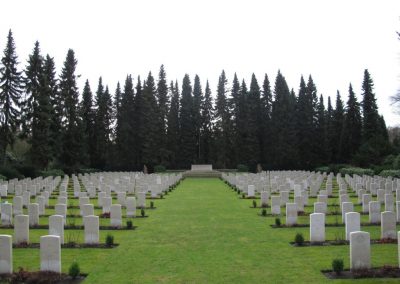 On 25 May 1917, the Stanthorpe Border Post reported that Albert was missing in action:

Mr & Mrs Jolly received word on the 7th instant that their son, Private Albert Edward Jolly, had been reported missing at the front in France since the 11th April.  Private Jolly left for the front in April, 1916, and went direct to France without going to England, and has been at the front ever since.  It is hoped that later information will bring the information that Private Jolly is alive and well.

One month later, the Stanthorpe Border Post provided an update:

Mr and Mrs Jolly received word on Friday from the Base Records Office, that their son, Private Albert Edward Jolly, who was previously reported missing since April 11th, is now officially reported wounded and a prisoner of war in Germany.

However, on 20 July the Stanthorpe Border Post reported his death:

Official advice has been received that Private Albert Edward Jolly died on 21st April while a prisoner of war in Germany, and the sad news was broken to his parents by the Reverend Edward Oerton.  The deceased lad, who was only just over 18 years, was the fourth son of Mr and Mrs T. Jolly, of The Summit, and has been about nine months in the firing line in France.  We feel sure his parents and other relatives will have the sympathy of all in their time of trial, and it will be a consolation to them to know that their son died fighting the battles of his country across the seas.

On the same day, in a letter to Army Base Records, Eliza Jane Jolly wrote:

My son Private Albert E. Jolly died while prisoner of war in Germany, ten days after being taken prisoner, and before I even received notice of his being a prisoner. My boy was only 18 years and two months of age.

In 1924, Private Albert Jolly was re-interred “with every measure of care and reverence“ in Ohlsdorf Cemetery, 8km west of Hamburg, Germany. Hamburg’s Ohlsdorf Cemetery is the largest non-military cemetery in the world. It was decided after World War I that the graves of all Commonwealth servicemen across Germany should be brought together into four permanent cemeteries. Hamburg was one these cemeteries and servicemen from more than 120 burial grounds were brought there.