Alfred Herbert Potts was the second of two sons of a Stanthorpe tin miner and his wife who died within two months on the Western Front in World War I. Alfred and Walter were among the nine children raised by Joah de Lacy and Ellen Potts at the Wheal Johnson Claim, Stanthorpe. Walter was killed in action near Messines in August 1917. Less than eight weeks later, Alfred died after being shot in the head when the 33rd Battalion attacked the village of Passchendaele. 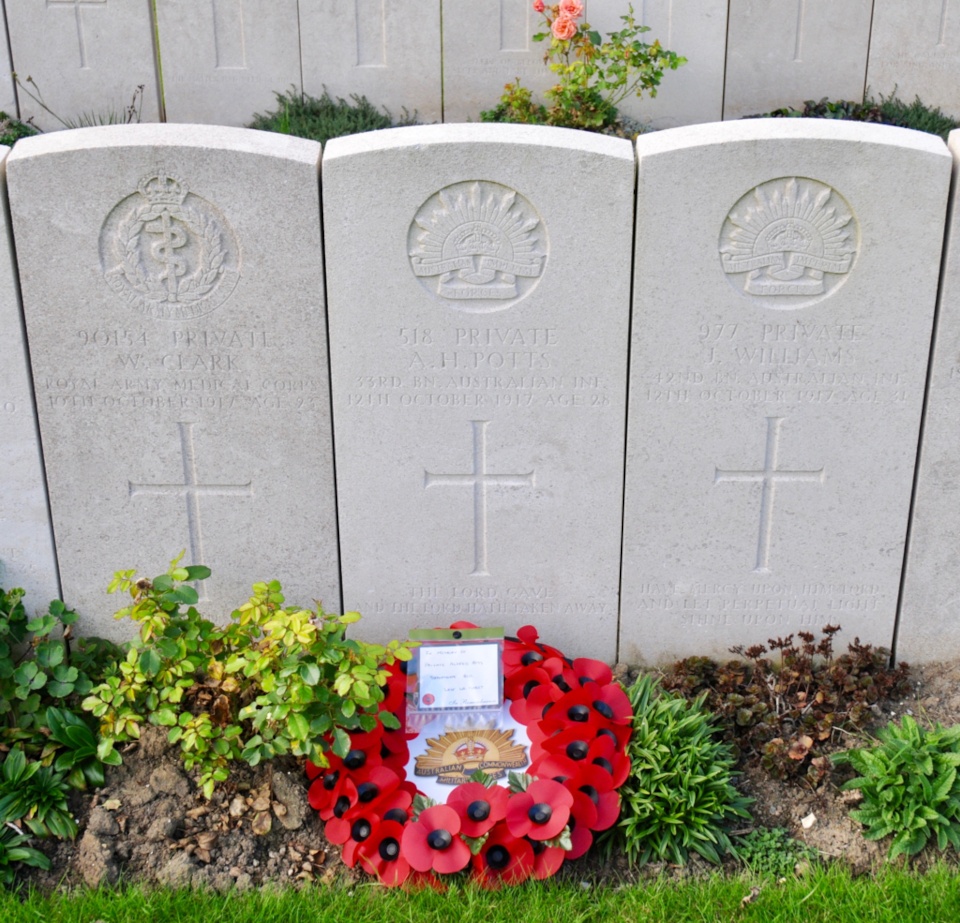 Alfred was born in Stanthorpe and went to school there. He became a tin miner and axe-man and, before enlisting, was working for the Railway Department at Werris Creek, New South Wales. Alfred enlisted in Armidale on 4 January 1916, joining B Company of the 33rd Battalion, a battalion drawn from the region that became known as “New England’s Own.”

The 33rd Battalion set up their training camp at the Armidale showground. It was in Armidale where Alfred would have met Frank Brennan who was also from Stanthorpe. Frank had joined 33rd Battalion in November 1915 and was killed in action at Armentieres, France, in February 1917.

Following training at the Rutherford Camp near Maitland, the battalion sailed from Sydney on active service aboard HMAT Marathon on 4 May. The Marathon stopped at Albany, Western Australia, for several days and then set sail for Egypt. However, half way to Colombo, their orders were changed and the 33rd Battalion was now to make its way to England. After returning to Albany to take on coal, the Marathon then made the long journey to England via South Africa. The Marathon arrived in Devonport, England, on 9 July.

Alfred spent the next five months undergoing intensive training at the Lark Hill Camp on the Salisbury Plain. He left England on 31 December to join his battalion already fighting in the front line in France.

The battalion spent the first few months of 1917 on the front line at Armentieres and then made preparations for its first great battle, the Battle of Messines.

Despite being demoralized by the massive explosions, the German strength was greatest immediately opposed to Colonel Morshead’s 33rd Battalion (Edwards 1996, 41).

In the fighting at Messines, between 7 and 12 June, the 33rd Battalion lost 92 men who were either killed in action or died of their wounds. Another 250 men were wounded. For the 33rd Battalion, the Battle of Messines claimed a heavier toll than any other battle during World War I (Edwards 1996, 47).

Alfred Potts survived Messines unscathed, and then following a period of rest, he and the 33rd Battalion spent the next several months moving in and out of the front line in French Flanders. 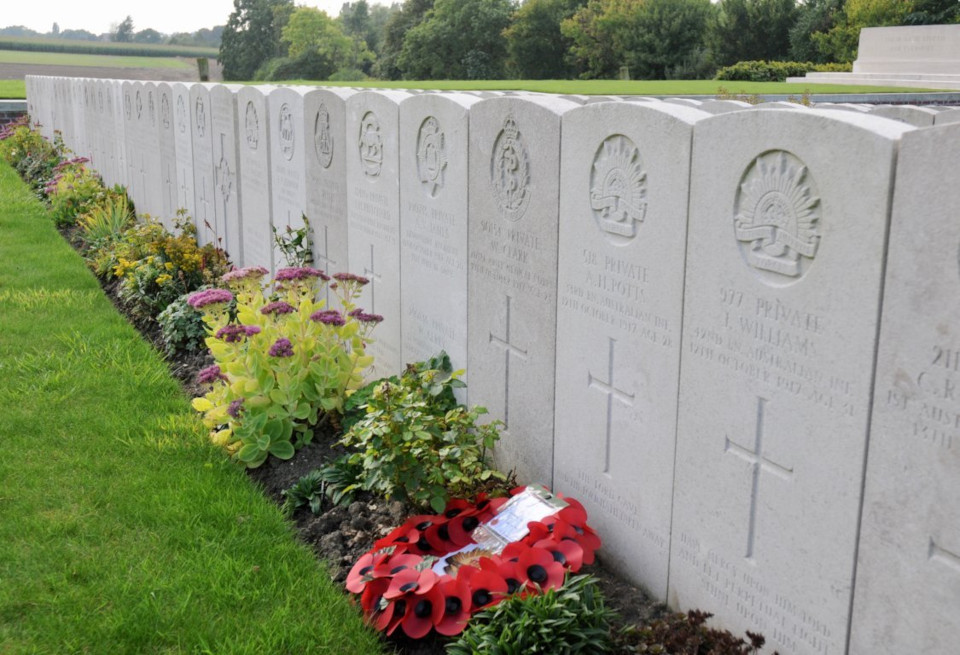 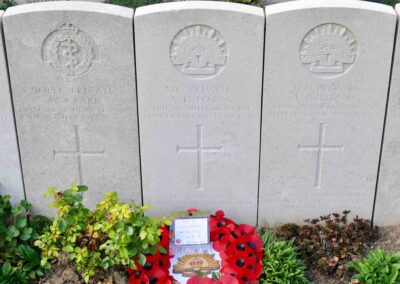 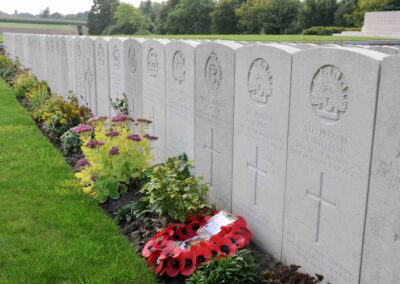 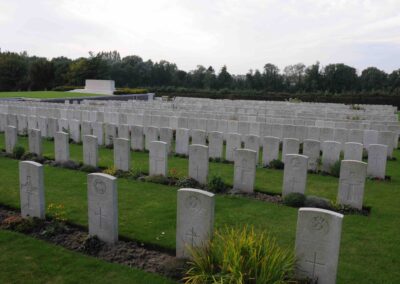 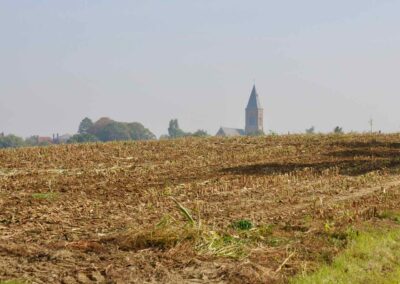 The Allies began a series of attacks east of Ypres on 31 July, with the aim of taking the German positions on the Passchendaele Ridge. This series of battles became known as the Battle of Passchendaele.

The actual attack on the village of Passchendaele began on 9 October when the Australian 2nd Division and the British 66th Division advanced against the strongly held German positions. Despite some limited gains the Allies were forced to withdraw. The 33rd Battalion as part of the 3rd Australian Division then joined the second push by the Allies onto the Passchendaele ridge.

The 3rd Division’s involvement began on October 12, when they attacked the Ridge along with the New Zealand Division. It proved to be a disastrous move. Inadequately supported by British artillery, they suffered 3,199 casualties in the first 24 hours. The Artillery could hardly be blamed for its poor performance. After a titanic effort to get the guns into position, through almost impassable mud, no sooner had they begun firing than the guns subsided into quagmire (Edwards 1996, 52).

Private Alfred Herbert Potts was admitted to the 11th Casualty Clearing Station suffering from a gunshot wound to the head on 12 October. He died of his wounds that day and was buried in the Godewaersvelde British Cemetery near the Belgian border in northern France.

We have had many sad obituaries to record as the result of the war, but one tinged with the greatest sadness was officially received in Stanthorpe on Friday evening last, when the Clerk of the Shire Council received word from the Base Records that Private Alfred Herbert Potts had died on the 12th October as a result of a gunshot wound received in action.  The Rev. E. Oerton undertook the painful duty of breaking the sad news to the parents, which he did on Saturday.  While attempting to cross the creek, which was in a flooded state, the car got stuck up in the stream, and Mr. Oerton had to walk one and a half miles to convey the sad news.  The deceased was the fifth son of Mr. and Mrs. J Potts, of Wheal Johnson, and the fact that it is only a few weeks since they received word that another son had been killed in action makes the news very much harder to bear.  He enlisted on January 2nd, 1916, at Werris Creek, NSW, being then in the employ of the Railway Department of that State.  After training at Armidale and Rutherford military camps he left Australia with the 33rd Battalion on May 4th, 1916.  On arrival in England he underwent training at Salisbury Plains, and went to France at the end of December, 1916, since which date he has been at the front.  He was 28 years of age, and a native of Stanthorpe, in which district he was widely known.  For his parents and other relatives the greatest sympathy will be felt.

Enclosed please find receipt for the Disc sent but I must say that we are greatly disappointed at not receiving his other personal effects as we had a letter under date 14/11/17 from Sister Ryde in charge of the 11th Clearing Station 33rd Battalion saying that his personal effects would be forwarded to the Base Records for us. When he went away he had an illuminated wristlet watch a gold ring and silver mounted wallet. I know well he would not part with any of these under any consideration. It is a strange thing that the effects of my other son who was killed in action on the 19th August should be all sent to his sister whilst dying in hospital his things are not sent. It is a poor return for the loss of two sons that we cannot get the few things he owned. Could any enquiry be made to try and find out what became of them.

The Army replied that in many cases soldier’s personal affects were received in several packages and that anything further would be expeditiously dealt with.

In another letter to Base Records in 1922 regarding his deceased sons, Joah de Lacy Potts wrote:

In filling in the Historical Form I omitted to mention a peculiar feature in regard to them. They were both born on the same day of the month 3 years apart and exactly 9 months after their mother’s birthday which I think is not equaled in the records of the Army.

The epitaph on Alfred’s headstone reads:

AND THE LORD HATH TAKEN AWAY

The same epitaph appears on the headstone of Alfred’s younger brother Walter.