Burchall “Bert” Dinham-Peren was one of two Stanthorpe men who died in World War I after the Armistice. Bert enlisted in December 1917 but did not make his way to the Western Front until January 1919 where he joined the 3rd Field Company, Australian Engineers. His time with the company lasted just two weeks before he was struck down by the global Spanish influenza pandemic. Bert died of bronchial pneumonia on 4 March 1919 and became one of an estimated 50-100 million people worldwide to die of influenza in 1918-19. Sergeant Lionel Lee was the last man from Stanthorpe to die in World War I, succumbing to typhus in April 1919 while waiting in Egypt to be shipped back to Australia. 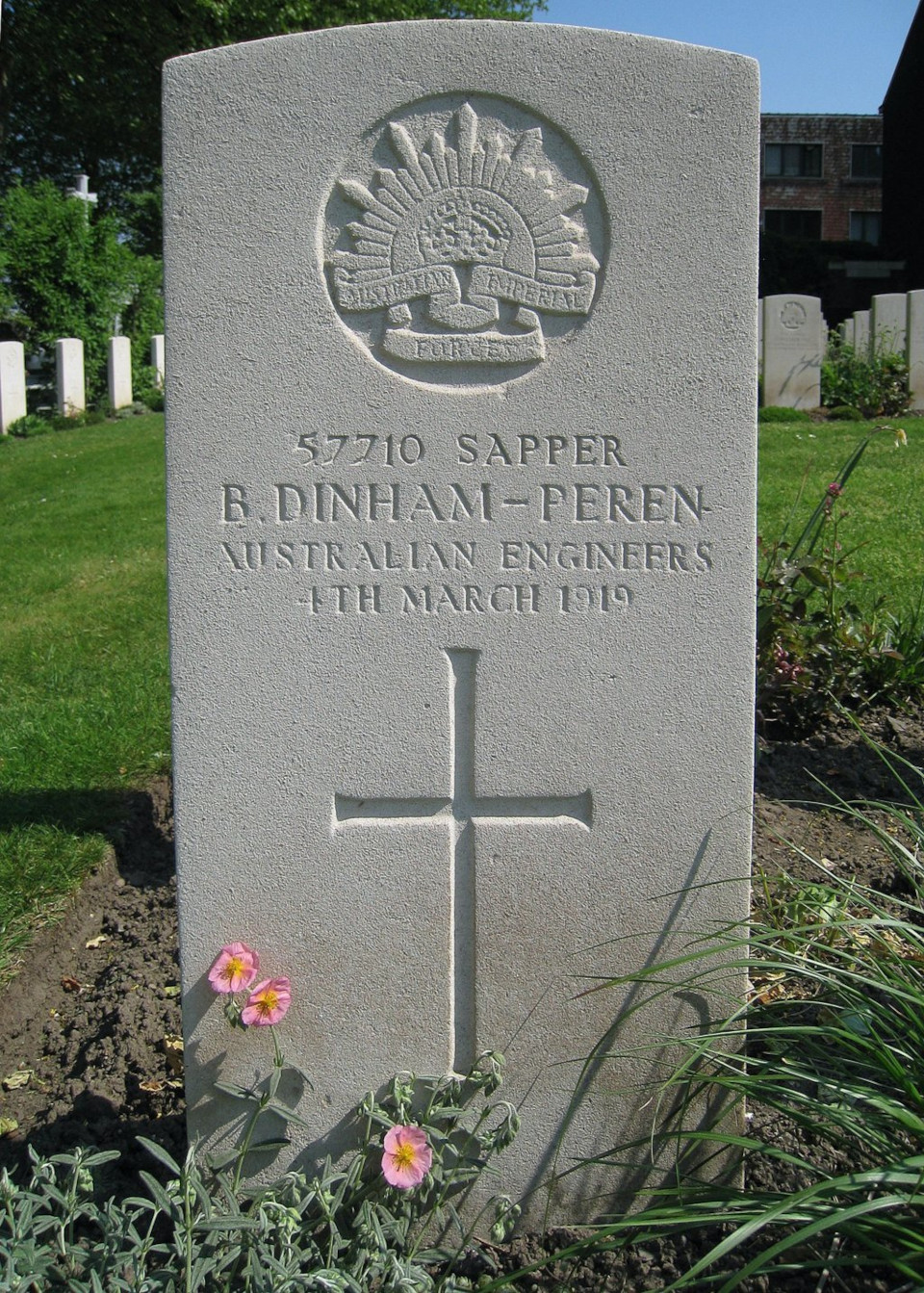 Burchall Dinham-Peren was born in South Petherton, Somerset, England on 19 June 1881. He was the son of Edward and Amy Dinham-Peren who had married at St. John’s Cathedral, Brisbane, on 14 August 1880. Amy was 18 years old and the seventh daughter of Arthur Edward Halloran, the Sheriff of Queensland, 1864-88. Edward described his profession as a gentleman, meaning he was of independent financial means. Following their marriage, Edward and Amy returned to Somerset where their three sons were born: Burchall in June 1881, Arthur in June 1882, and Edward in June 1883.

The Dinham-Peren family emigrated to Australia, arriving in Sydney on 4 January 1892. They initially settled at Mudgee, New South Wales, before moving to Melbourne where the boys went to school at Haileybury College, Brighton. Amy Dinham-Peren died in April 1906 and was buried in St. Kilda. Bert’s father Edward died in the Melbourne Hospital in January 1915.

Bert fought through the entire Boer War in South Africa where he was awarded the Queen’s South Africa Medal and five clasps, according to his obituary in The Queenslander, 29 March 1919. He served with “A” Division of the South African Constabulary, a paramilitary force under the leadership of Major General Robert Baden-Powell who later founded the worldwide Scout Movement. In 1910, Bert’s brother Arthur moved to South Africa to work as an electrical engineer with De Beer’s Consolidated Mines. Arthur served for two and a half years in France as a captain with the Royal Engineers and survived the war.

Bert trained as a railway engineer and surveyor and in 1914, was living at Tango Vale Orchard, Stanthorpe. He was a vice-president of the Stanthorpe Agricultural and Pastoral Association and reportedly took a prominent part in all local concerns. Bert married Margaret “Madge” Harpur Woolcock at St. Barnabas Church, Red Hill, Brisbane, on 22 April 1914. Madge was 21 years old and the eldest daughter of a well-known Brisbane barrister John Woolcock and his wife Gertrude. Bert and Madge had a daughter, Margaret Mary (Peggy), born on 16 April 1916. Peggy married William Francis Hill at St John’s Cathedral, Brisbane, the marriage venue of her grandparents, in March 1940.

At the age of 36 years and six months, Bert enlisted in Toowoomba on 29 December 1917. He joined the No.1 Depot Company and attended N.C.O. School. He was promoted to Provisional Corporal on 20 May 1918 and joined the 4th General Service Reinforcements. Bert embarked on active service from Sydney on 5 June aboard HMAT Orontes, disembarking at Liverpool on 11 August. He joined the Australian Engineers from the 5th Training Battalion, while training at Fovant on the Salisbury Plain, England. He left Southampton for the Australian Staging Camp at Abancourt, France, on 29 January 1919 and joined the 3rd Field Company Engineers in the field on 7 February. At the time, the 3rd Field Company was stationed at Sart Eustache, France, where the men were tasked with repairing roads, building billets, and constructing cases for transporting stores back to Australia.

The Australian War Memorial described the general duties of the Engineers:

Engineers, also known as sappers, were essential to the running of the war. Without them, other branches of the Allied Forces would have found it difficult to cross the muddy and shell-ravaged ground of the Western Front. Their responsibilities included constructing the lines of defence, temporary bridges, tunnels and trenches, observation posts, roads, railways, communication lines, buildings of all kinds, showers and bathing facilities, and other material and mechanical solutions to the problems associated with fighting in all theatres (AWM 2018).

Bert was admitted to the 2nd Field Ambulance on 20 February, suffering from bronchitis, only 13 days after joining the 3rd Field Company Engineers in France.  On 28 February he was moved to the 20th Casualty Clearing Station suffering from influenza. Bert was listed as dangerously ill on 1 March and died on 4 March of “bronchial pneumonia due to exposure whilst on military duty”. 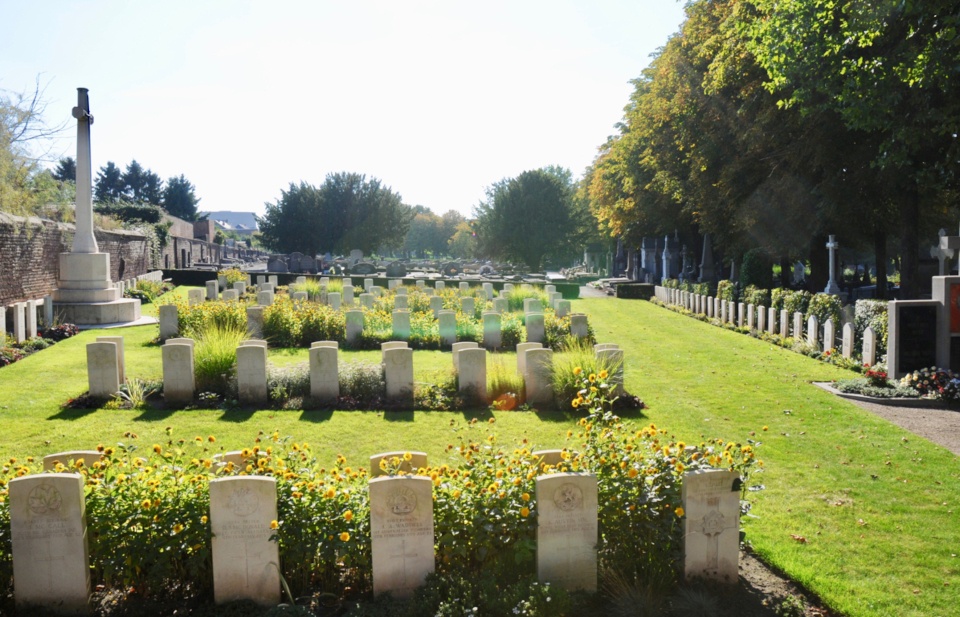 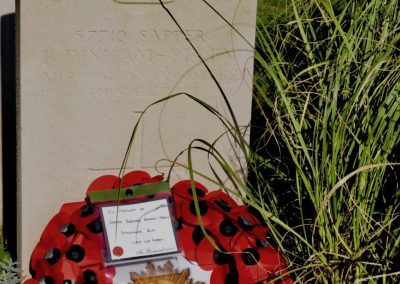 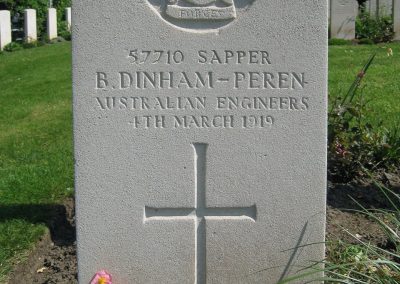 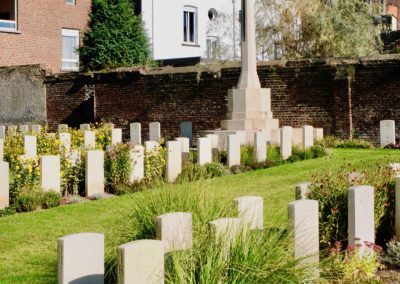 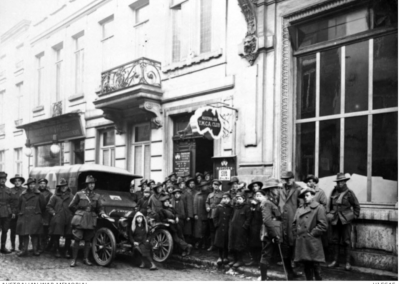 In the book, The 7th Field Artillery Brigade Yandoo, an Australian gunner stationed in France at the time wrote:

An epidemic of Spanish Influenza showed itself in January, and for some weeks it raged. Illness was rife in the units, and deaths from “Bronco-Pneumonia” were numerous. Funerals passed through the town daily – sometimes it was a coffin borne by a gun and drawn by a team of black horses, but more often a draped hearse followed by a queue of civilian mourners. March saw a gradual disappearance of the “flu”, for which every one was thankful (Rohu & Harding 1919, 138).

According to Colonel Arthur Butler in the Official History of the Australian Medical Services 1914-18:

During the four years 1914-18 the Great War was responsible for 27 1/2 million casualties with some eight million deaths among the nations engaged (Butler 1943, 190).

This was a tragic loss of life but it was a much smaller toll than the estimated 50-100 million people worldwide who died in the Spanish influenza pandemic between 1918 and 1919. Butler wrote further:

Perhaps the most extraordinary feature of this extraordinary pandemic is the furious speed with which it spread itself throughout a community, a locality, and the globe. (Butler 1942, 192)

The pandemic occurred in two clear phases, the first in the spring and early summer of 1918 and then, following a partial intermission, a more malignant phase in the autumn and winter of 1918-19 (Butler 1943, 193). Australian troops serving on the Western Front were hit hard by the pandemic. Admissions of A.I.F. soldiers, suffering from influenza, to field ambulances, casualty clearing stations and general hospitals in France, exceeded 23,000 in 1918-19, with almost 4,000 men being evacuated to the United Kingdom (Butler 1943, 218).

On 1 October 1919, Madge Dinham-Peren acknowledged receipt of Bert’s personal effects while she was living at Tango Vale. On 8 June 1921, Madge married Lieutenant Hector de Tuetey in a quiet celebration at St Barnabas Church, Red Hill. Only the immediate relatives of the bride and bridegroom attended the wedding. Hector was formerly Aide-de-Camp to Sir Hamilton Goold-Adams, Governor of Queensland, 1915-20. Following their wedding, Hector and Madge were to make their home in the Stanthorpe District.

It appears, however, Hector and Madge moved from Stanthorpe to live in Sydney but the Army was unaware of this move, as they wrote to Madge at Tango Vale, on 14 December 1922, to say they had received no reply to their communication regarding the erection of a permanent headstone for Bert. The Army was seeking details of an inscription for Bert’s headstone as well as personal particulars for the Roll of Honour. The Memorial Plaque for Bert was returned unclaimed on 28 December 1922 and his file was marked “now untraceable”.  In December 1923, the Army placed notices in a number of regional and city newspapers seeking details of Bert’s next-of-kin so that they may be sent his service medals. Madge died in Chatswood, Sydney, in 1928 and was buried in the Field of Mars Cemetery, East Ryde.