Private Cecil Bott was one of seven men associated with the Granite Belt to die at the Battle of Passchendaele in October 1917. Cecil enlisted to fight with the 12th Machine Gun Company and in May 1917 was joined by another Stanthorpe man, Private James Scott. Later, James had photographs of Cecil’s grave that he intended to take back to Stanthorpe to give to Cecil’s parents. However, James died of wounds received in fighting near Peronne, France, in September 1918. 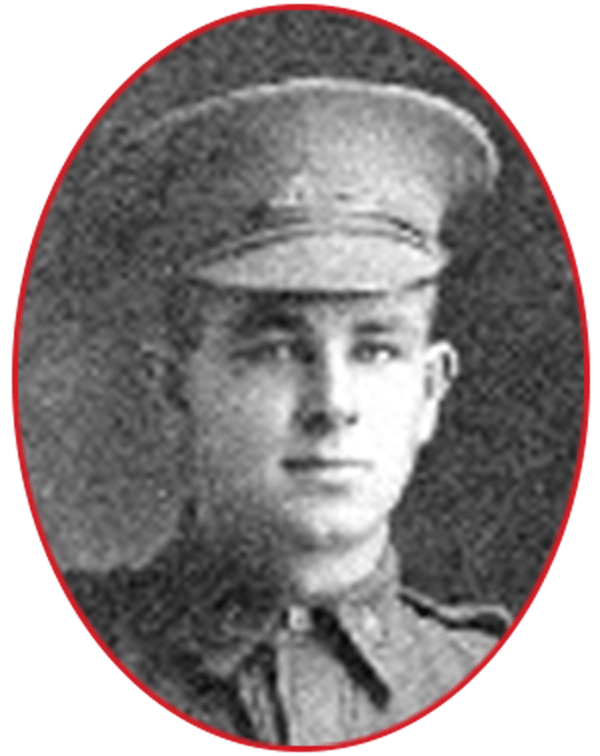 Cecil “Charlie” Bott was the eldest son of Henry and Mary Alice Bott, of Werneth House, Spring Creek, near Stanthorpe. Two days after his 19th birthday, Cecil enlisted in Warwick on 26 June 1916. He had grown up around Stanthorpe and had been working as a labourer. The Bott family had strong ties with the area as Henry Bott was born in Warwick and Mary Alice Bott, nee Radford, was born in Toowoomba.

Cecil left Australia on active service aboard HMAT Ulysses on 20 October and disembarked in Plymouth, England, on 28 December. He travelled to the Australian Imperial Force (A.I.F.) Training Camp at Perham Down on the Salisbury Plain. Early in the January 1917, Cecil marched out to the Australian Machine Gun Training Depot at Grantham, Lincolnshire. Following three months of intensive training in the use of the Vickers machine gun, Cecil left for France on 10 March. He spent time at the Machine Gun Base Depot at Camiers before joining the 12th Machine Gun Company (12th M.G.C.) in the field on 16 April.

According to the War Diary of the 12th M.G.C. the company was in a training camp at Bresle, near Albert on the Somme. In mid-May the company travelled by train to Steenwerck on the French-Belgian border and then on 28 May, it moved to a forward area near Neuve Eglise in preparation for the upcoming Battle of Messines. It was then that another Stanthorpe man, Private James Scott, joined Cecil in the 12th M.G.C. It appears they became good friends, as Cecil’s service record shows that photographs of Cecil’s grave were sent to James. James had intended to take the photographs to Cecil’s parents. However, Private James Scott, winner of the Military Medal and Bar, was to die of wounds received in action in September 1918.

On 7 June, following the exploding of mines along the Messines-Wytschaete ridge, the 12th M.G.C. joined the attack at the Battle of Messines. Two sections initially supported the 12th Brigade A.I.F. before the company took up forward positions to the north and south of Messines. On the way to the frontline, the men were forced to wear respirators as the enemy sent over many gas shells. The company fought in the frontline at Messines until relieved on 12 June. The 12th M.G.C. suffered heavy casualties in the battle: 10 men killed, 25 wounded and four missing.

The 12th M.G.C. spent July at a training camp near the French-Belgian border before moving back into the frontline northeast of Messines on 8 August. It remained there for two weeks before moving back to a support area at the Belgian village of Neuve Eglise. For most of September, the company was training in northern France but was then called to join the fighting at the Battle of Passchendaele. On 22 September the 12th M.G.C. marched into the 1st Anzac M.G. Camp at Belgian Chateau, near Ypres, where it camped in shelters and dugouts.

The 12th M.G.C. were ordered to move to the frontline to relieve the 5th M.G.C. on the night of 10 October. Captain Crouch and 2nd Lieutenant Cullimore inspected the new frontline position and found the 5th M.G.C. practically wiped out. At 2.30am on 11 October the 12th M.G.C. left Belgian Chateau and at dawn arrived at the support line at Zonnebeke. A new company headquarters was established and machine guns were positioned in the support line amidst heavy enemy shelling. 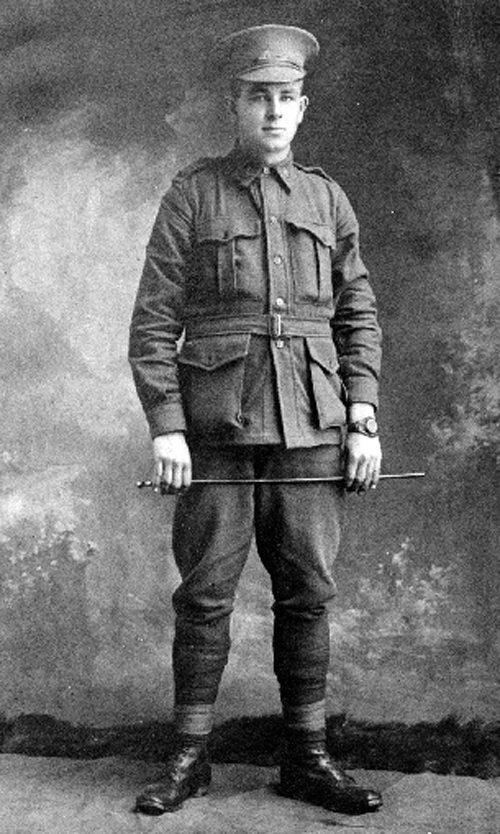 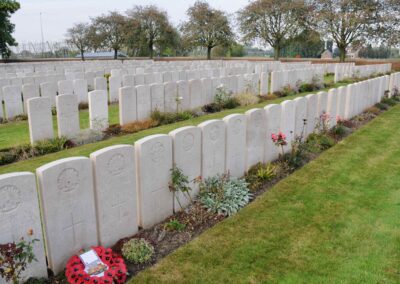 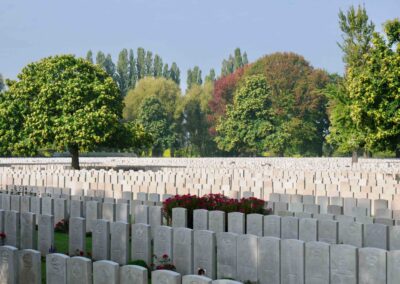 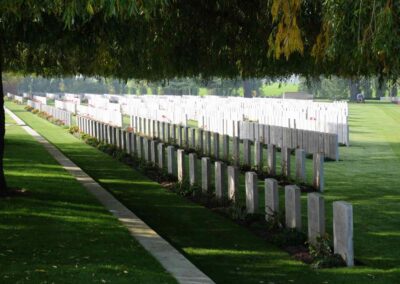 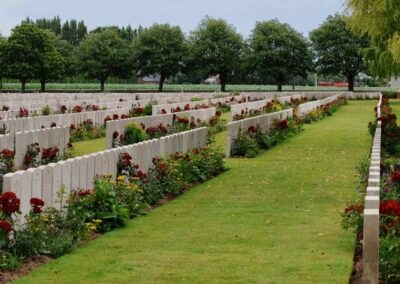 Orders were received to send four guns and teams “over the top” with the infantry attack planned for the morning of 12 October. The remaining eight guns and teams were to be brought forward for S.O.S. and creeping barrage work. Heavy casualties were sustained by the 12th M.G.C. while getting in position and the War Diary noted “showery cold weather all day and mud and general conditions most severe”.

At 2.30am on 12 October the four guns and teams supporting the attack of the 47th and 48th Battalions moved forward to the rear of the jumping-off trench. Again it was noted that casualties were “pretty heavy”. At 5.45am the attack on the village of Passchendaele commenced and the 12th Brigade A.I.F. practically gained its final objective. However brigades either side failed to link up. The 12th Brigade was forced to move back to the line of its first objective and was covered in retirement by the remaining guns of the 12th M.G.C. “hop over party”. All that remained of this group were two officers, one N.C.O. and eight men together with two machine guns. The War Diary noted that “these worked to the last and then surviving personnel destroyed the guns and withdrew”. It was cold and wet all day and rained heavily that night.

It was on this day that Private Cecil Bott suffered a severe wound to the head. He was first treated by a field ambulance unit and moved to the 17th Casualty Clearing Station, Belgium.

He was admitted into this Station suffering from a severe shell wound of the head and in a critical condition. His condition gradually became worse, and it is with regret I have to inform you of his death, which occurred at 3.45am on the morning of 18/10/17 as a result of this wound. He was buried the same day in the Soldier’s Cemetery near to this Hospital, his grave being duly marked and registered.

[Cecil] was a mate of mine and was alongside me in a support trench at Wytschaete at about 6 a.m. one day in Oct 1917. He was going to carry ammunition with me to the front line. He stood up and was hit in the temple with shrapnel. He died at the A.D.S. about 3 kilos back three days later. His name was Charlie. He came from Melbourne and was the only Bott in Co.

In his report, Private Reid had confused Wytschaete with Zonnebeke and also incorrectly recalled Cecil’s hometown.

News was received on Wednesday morning that Private Cecil Bott had paid the supreme sacrifice at the front.  The Rev. D. Fletcher went out to the home of the deceased’s parents at Spring Creek.  Private Cecil Bott was the eldest son of Mr. and Mrs. H. Bott Jnr., of Spring Creek, and when he enlisted last year he could not have been more than 18 years of age.  He was a fine strong lad, and to think that his young life has been cut short in the defence of his country in distant lands is very sad indeed.  He was a native of Stanthorpe and the greatest sympathy will be felt for his parents and other relatives.

If you could give me a little more information as to what day my boy was wounded on. That is was it on the 18 Oct, the same day as he died? Is a Casualty Station a temporary hospital as I think it must be, and if so would he receive a proper burial, and would it be possible for me to know even the name of the town where he rests? Perhaps I am asking rather much but as a mother naturally does, I want to know all I can of my dear boys last hours.

The Army replied and explained

your son was wounded in action and admitted to the 17th Casualty Clearing Station, France [sic] on the 16th October and died two days later. As you assume a Casualty Clearing Station is a temporary hospital where soldiers are received pending their removal to a Military Hospital. It would appear in the case of your son that his wounds were of such a severe nature that it was impossible to have him removed.

Private Cecil Bott is buried in Lijssenthoek Military Cemetery, near Ypres, Belgium. The cemetery contains 9,901 Commonwealth burials of World War I and another 883 war graves of other nationalities, mostly French and German. John Laffin in his book, “Guide to Australian Battlefields of the Western Front”, wrote of this cemetery:

Just behind the extreme range of enemy shellfire and on a railway line, it was a natural place for hospitals to establish themselves. The hospital staff began to bury their dead in a hopfield, which became the second greatest British war cemetery after Tyne Cot. More Australians (1,131) are buried here than anywhere except Tyne Cot. All are known by name because they died of wounds and…left the battlefield wearing identity discs. Lijssenthoek is, in effect, the quintessence of collective suffering (Laffin 1992, 44).