Private Edmund “Ted” Stewart was one of three soldiers from Stanthorpe to die at the Battle of Dernancourt in April 1918. Ted enlisted in 1915 at the relatively late age of 37. He fought at Gallipoli with the 25th Battalion before moving to France with the 2nd Pioneer Battalion. In March 1916, Ted suffered a serious facial injury that caused him to return to Australia to recover. Once fully fit, he joined the 4th Pioneer Battalion and made his way back to the fighting on the Western Front. Private Edmund Stewart was first reported missing in April 1918, but in September that year, a Court of Enquiry determined he had been killed in action at Dernancourt on 6 April 1918. 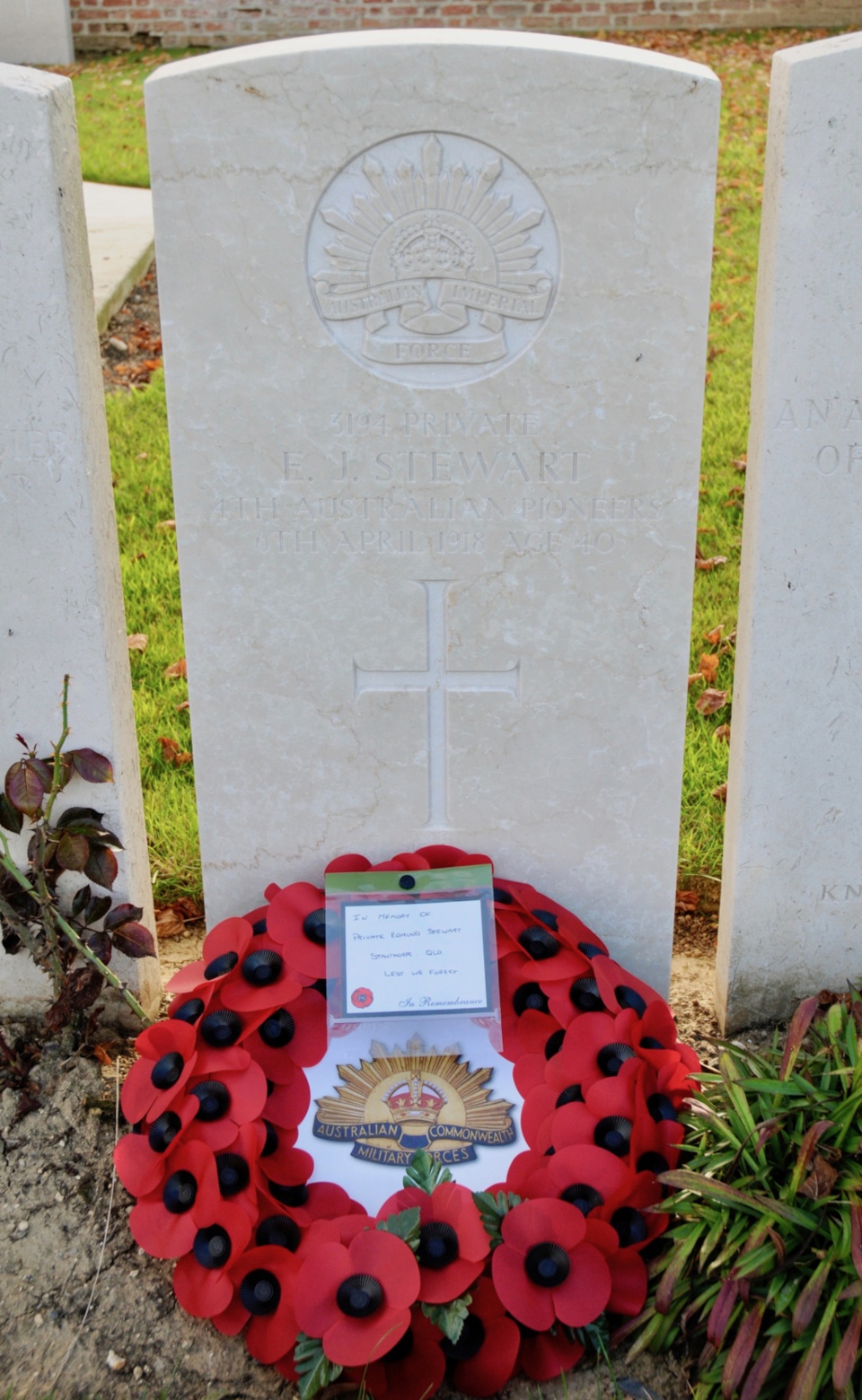 Edmund “Ted” Stewart was born in Stanthorpe, the son of William and Bridget Stewart. Ted grew up in Stanthorpe and attended St. Joseph’s School before working as a labourer and miner.

Ted enlisted in Lismore on 3 March 1915 and became an original member of the 25th Battalion that was raised at Fraser’s Paddock, Enoggera. He joined “C” Company and was given the Service Number 744. Ted departed Pinkenba, Brisbane, aboard SS Aeneas on 29 June. Private James Patton was also aboard having joined the 25th Battalion nine days before Ted. James had been working for the Queensland Railways Department at Stanthorpe before enlisting. Private James Patton died of wounds he received in the fighting at Delville Wood in January 1917. Following a short stopover in Sydney, together with the 29 officers and 1,034 other men of the 25th Battalion, Ted left Australia on active service. The battalion disembarked at Suez, Egypt, on 4 August, the first anniversary of the outbreak of World War I, and left that evening by train for Polygon Camp, about 8km from Cairo (Doneley 1997, 16).

The battalion practised musketry and bayonet fighting until it was ready to join the battle at Gallipoli. The 25th Battalion landed at Anzac Cove aboard SS Sarnia on the night of 11 September.

The Australian 4th Brigade…had fought itself to a standstill during the August battles when it had strived so gallantly to seize the heights north of Anzac. The scope of its situation can perhaps be appreciated in that the entire 4th Brigade was relieved by just one battalion, the 25th, on Lower Cheshire Ridge (Doneley 1997, 22).

The battalion fought in the line at Lower Cheshire Ridge and the Apex until evacuated on 18 December. While at Gallipoli, the 25th Battalion’s casualty list was: 21 men killed in action, 16 died of wounds, seven died of disease, and 354 were wounded  (Doneley 1997, 32). The battalion arrived at Alexandria, Egypt on 10 January 1916 and moved by train to Tel-el-Kebir.

Ted transferred to the 2nd Pioneer Battalion on 14 March 1916 and left Egypt for the fighting on the Western Front. On 3 May, while in a billet at Armentieres, France, Ted fell on a box and fractured his lower jaw. Admitted to the No.14 General Hospital, Wimereux, on the French coast, he was soon invalided to the No.1 Auxiliary Hospital, Cambridge, England.  While recovering in England, it was recommended Ted should return to Australia for six months as he was deemed unfit for general service, but fit for home service.

Ted arrived back in Australia aboard HMAT Marathon and was admitted to the Base Hospital Brisbane on 29 September. After being declared fit to return to duty, he was discharged on 23 October.

He immediately joined the 7th Reinforcements of the 4th Pioneer Battalion and left Brisbane on 17 November aboard HMAT Kyarra. His Service Number was now 3194. The 4th Pioneers arrived in Plymouth, England, on 30 January 1917.

Ted was sent to the Australian Military Camp at Fovant where for a short time between July and September he transferred to the 52nd Battalion. On 17 September, Ted proceeded to Belgium, joining up with the 4th Pioneers in the front line in the Ypres Salient.

The 4th Pioneers were tasked with the risky jobs of laying communication cables and building and repairing roads. In December, the battalion moved near Peronne, on the Somme, where it provided working parties under the harshest conditions. The War Diary of the 4th Pioneers noted it was “snowing hard and very cold”. In the New Year, the battalion moved back north to Godezonne Farm, south-west of Ypres. Here the battalion stayed until late March when it was ordered to move to the support lines at Henencourt Wood near Albert, on the Somme (AWM 1918). 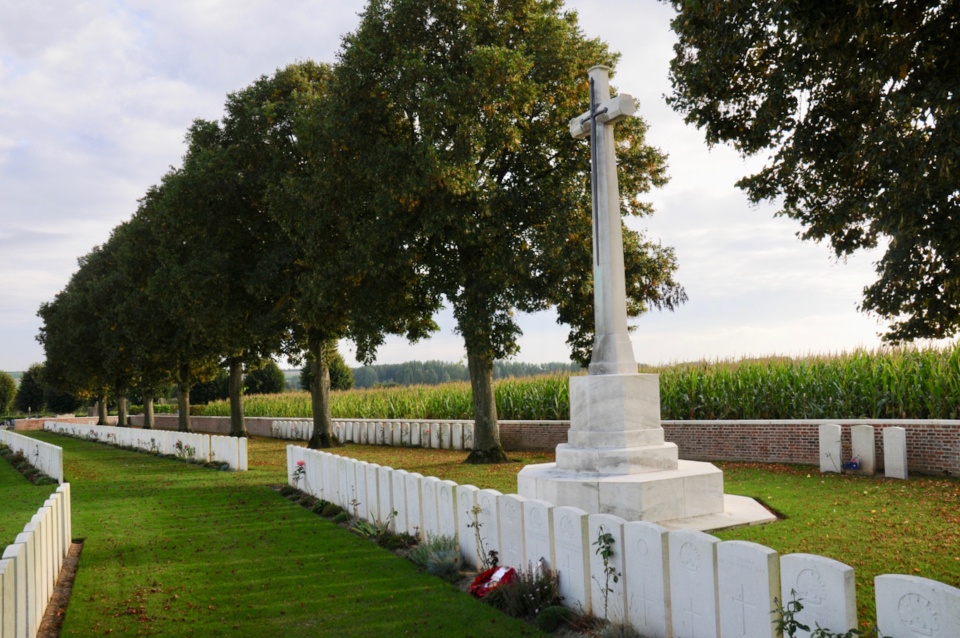 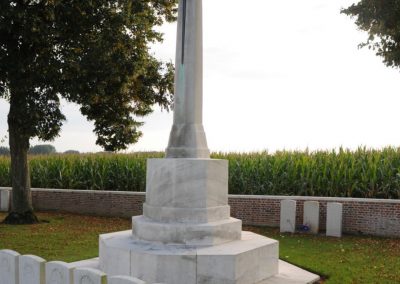 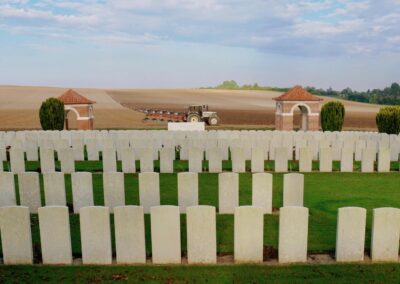 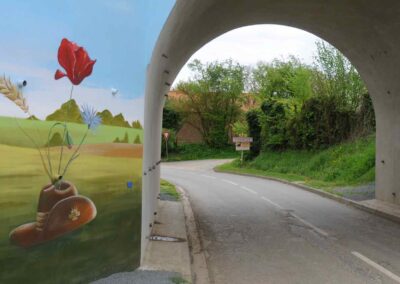 The War Diary of the 4th Pioneers noted:

2nd April a party of 90 other ranks under Lieutenants Pennyfather and Reid were detailed to proceed to the vicinity of Dernicourt [sic] and Buire to drive tunnels through the railway embankment for machine gun positions…this was on the front line system, and on the enemy attack on 5th April these parties reported to the 47th and 52nd Battalions and assisted the infantry to hold the line, all doing exceptionally good work… Lieutenant Pennyfather and 44 other ranks at this time became casualties (AWM 1918).

Private Edmund Stewart was first reported missing on 7 April. A Court of Enquiry held on 27 September 1918 determined Ted had been killed in action on 6 April 1918. He was 40 years old.

I was told by a C. Company man whose name I forget, that L/Cpl. Ted Stewart. 4th A.I.–1st Sect. was certainly killed, about April 5th, and while they were tunneling through the railway cutting, on the right of Albert, the Germans came over. L/Cpl. Stewart went up the bank to fire at the enemy. He was shot through the head and killed instantaneously. The Red Cross could probably get all particulars from Col. Rutledge, 4th Pioneer Battn. O.C. of the Coy. Ground was lost. Description: A Gallipoli man, very quiet, returned to Australia, and then came back again.

I know Stewart was killed near Albert, while tunneling in April. He was my mate. Pte. Fenton, 4th Pioneers, could give further information. He was killed instantaneously and I think buried in Cemetery near. Description: Very big strong man, clean shaven, from Stanthorpe, Queensland. Christian name, Ted.

I did not see Stewart (A.I.) killed straight out by machine gun bullet through head at Albert in the morning during a stunt. I don’t know about burial. We went back so he would have been buried by the Germans. They sent runners out from the Battn but could not find the grave. I have written to his sister giving particulars, Stewart came from Stanthorpe Q. I think he was a railway worker – I know his people.

Some months ago word was received from the Base Records Office, Melbourne, by Mrs. Stewart of Wheal Johnson, that her son, Corporal [sic] Edmund Joseph Stewart, was reported missing.  The hope was cherished that Corporal Stewart might still be alive and a prisoner of war, but any doubt as to the soldier’s fate was set to rest this week by the receipt of a wire from the Base Records Office that Corporal Stewart was killed on the 6th of April last.  It was on that day that the Australians stood between the Germans and Amiens and no doubt it was in the terrible fighting that ensued there that Corporal Stewart paid the supreme sacrifice.  The late Corporal Stewart went to the front in 1915; he was wounded and invalided home in 1916, and returned to the front towards the end of that year.  For his mother and other relatives the greatest sympathy is felt.

In March 1920, Bridget Stewart wrote to Army Base Records saying that she was Ted’s nearest living relative and that his father was dead. She also confirmed Edmund was not married at the time he was killed.

The following month, Bridget was informed that Private Edmund Stewart was interred in the Dernancourt Communal Cemetery, France. “

Dernancourt Communal Cemetery and Extension is a large cemetery, it has 2,130 burials including 418 Australians, 48 of them unknown (Laffin 1992, 103).

The Railway Cutting at Dernancourt.