Francis “Frank” Brennan was like many young men of his generation, eager to enlist for war service as soon as he could. He was working hard as a labourer when, at just 18 years of age, he joined the 33rd Battalion in Armidale, northern New South Wales.  He undertook more than a year’s hard training with the 3rd Division A.I.F. before joining the fighting on the Western Front in November 1916. Frank’s time at the front lasted less than three months. Whilst in the frontline near Armentieres in northern France on 12 February 1917 he was seriously wounded by enemy artillery fire and died later the same day. 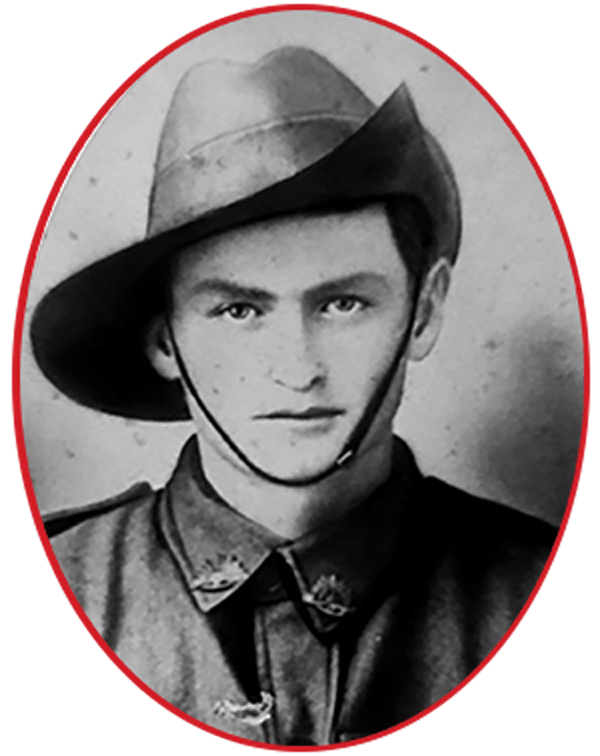 Francis George Brennan was the son of Patrick and Amelia Brennan of Two Mile Gate, near Stanthorpe. In November 1915, just two months after his 18th birthday, Frank was working at Enmore, near Uralla, when he enlisted at Armidale, the closest big town. Frank joined the 33rd Battalion, which became known as “New England’s Own” because many of the recruits were drawn from that region.

Frank‘s service began at the battalion’s training camp that had been established at the Armidale showground. While Frank was in training in Armidale, another Stanthorpe man joined the 33rd Battalion. Private Alfred Potts, who was working for the Railway Department at Werris Creek, enlisted in January 1916. Alfred was killed in the Battle of Passchendaele in 1917.  In February 1916, the battalion moved from Armidale to the Rutherford Camp, near Maitland, for brigade training.

Together with the other 1,027 officers and men of the 33rd Battalion, Frank departed Sydney on 4 May 1916 aboard HMAT Marathon. They expected to be sailing to Egypt but instead found they were heading for England via stopovers in Durban, Cape Town, and Dakar. Frank disembarked at Plymouth, England, on 9 July and travelled by train to the Lark Hill Camp on the Salisbury Plain. Months of hard training lay ahead as the 33rd Battalion prepared for life in the trenches on the Western Front. Frank sailed from Southampton to join the fighting in France on 21 November, just over a year after he had enlisted.

The 33rd Battalion spent the first few months in the front line in the ”Nursery” sector near Armentieres in northern France. Although this was supposed to be a quieter part of the front line, conditions were extremely tough and made much worse by the extremely harsh winter. The War Diary of the 33rd Battalion for 11 February 1917 contains a scout report that described the bleak conditions:

The snow is still very thick and last night commenced to thaw. The body of a man (Australian) was found. He had his rifle slung and was in a crawling position facing our lines. He was evidently one of the 10th Brigade raiders. He could not be moved as he was frozen to the ground, nor could any of his pockets be opened. (AWM,1917)

The following day, the 33rd Battalion War Diary outlined how the enemy had responded to an Allied artillery bombardment:

He used a great deal of heavy high explosive. One shell landed in a bay with a Lewis Gun team wounding three men seriously and damaging the gun. (AWM,1917)

Frank was one of the three men from the Lewis Gun Section who were seriously wounded. His service record states that on the 12 February 1917 he was admitted to the 1st Canadian Casualty Clearing Station suffering a compound fracture of the femur and wounds to his face, arm, and leg. He died later the same day.

I was in the same Battalion with Brennan. I knew him well. I was one of his cobbers and was in hospital with him at Rutherford Camp when we both had measles. I was in the same trench with him at Armentieres on the 12th February doing garrison duty. I was right alongside of him when a “pineapple” shell came into the bay he was in- and hit him. He was carried out but did not seem to be very bad and was laughing at the thought of getting a “Blighty.” I did not think he was badly wounded and was surprised when I heard the next day that he has died. He was fairly tall, thin, fair complexion about 22 years old. He was a very happy-go-lucky chap and real good mate, very popular. 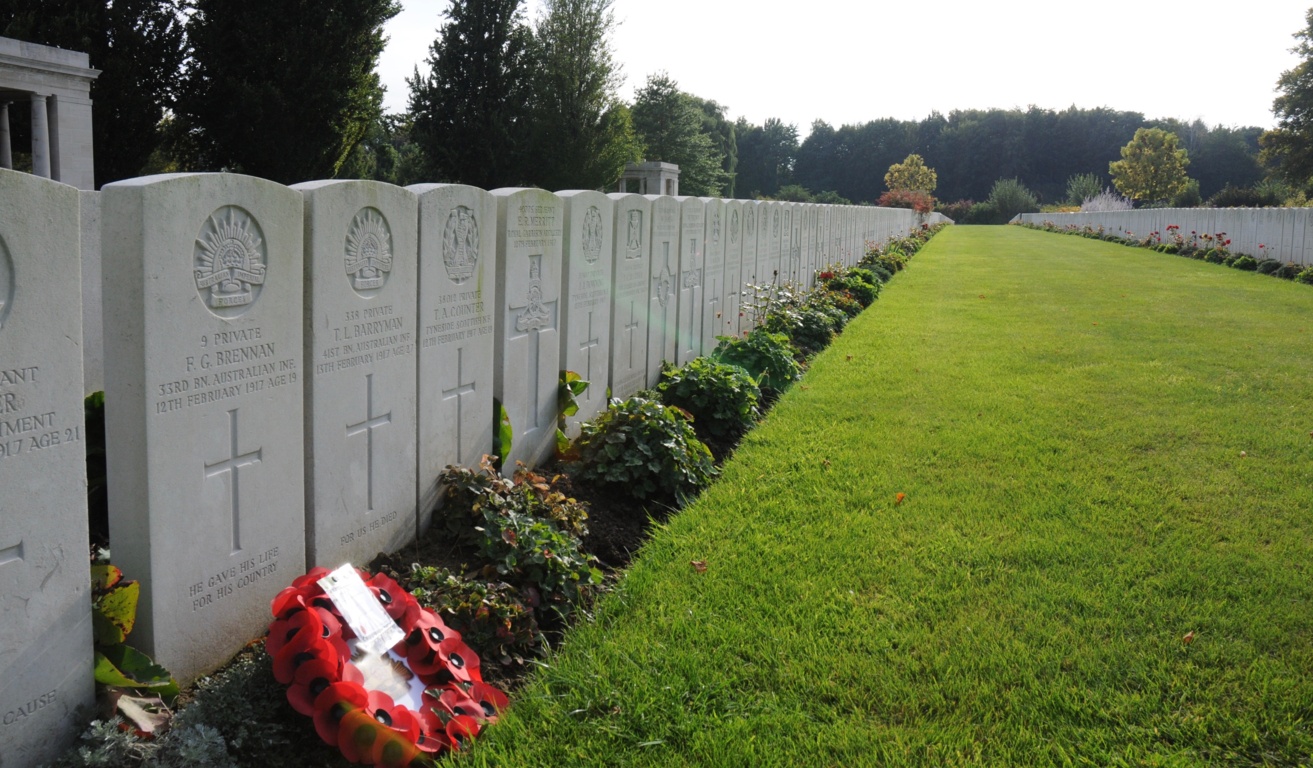 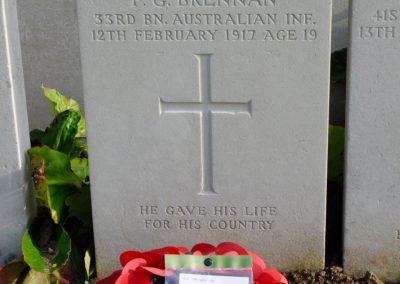 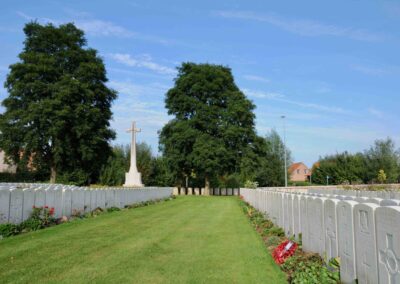 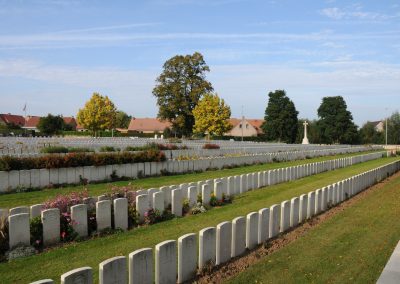 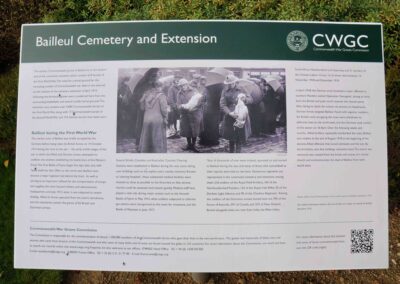 Saturday last brought to Stanthorpe, by cable, the sad news of the death of another local lad at the front, in the person of Private Francis George Brennan, who died of a gunshot wound to the face and arm.  Private Brennan was the eldest son of Mrs. Brennan, of the two-mile gate. He was 19 years and five months old, and a sad coincidence is that on the day his mother received the sad news of his death she also received two letters from him saying he was alive and well, and “strafing Fritz” for all he was worth.  The news of his death was conveyed to Father Murphy, who went out and broke the sad news to the family.

A further article in the Stanthorpe Border Post followed in May 1917:

Mrs. P. Brennan has received three letters from France regarding the death of her son, Private Francis George Brennan.  One letter is from Private D.V. Mass, of Mt Janet, one from the Captain of the Company in which Frank was serving, and one from Lieutenant Colonel Morehead, who says:  “I very much regret that I should have to write to you of your gallant son, No 9, Private Francis George Brennan.  He was wounded by shrapnel on 11th instant and died the following day.  I want to tell you that your son proved himself an excellent soldier.  Always ready and willing to cheerfully perform any duty, ever reliable and trustworthy, he was one I could ill afford to lose.  All his officers speak in the highest terms of him, and he was greatly beloved by his comrades.  Officers, non-commissioned officers and men all join with me in offering you most sincere and heartfelt sympathy in your great loss.”

The epitaph on Frank’s headstone reads

HE GAVE HIS LIFE