Three sons of a Glen Aplin family enlisted on the same day for service in World War I and a fourth enlisted 11 months later. George, William and Charles Hughes enlisted in Toowoomba on 7 September 1915. Their younger brother Claude, although only 17 years old, enlisted in August 1916. They were the sons of Arthur and Mary Hughes. George, the eldest of the brothers, was killed in action in Belgian Flanders in September 1917. Charles was injured while serving in Egypt and was forced to return to Australia. Claude was wounded while fighting in France leaving William the only brother to go through the war seemingly unscathed. 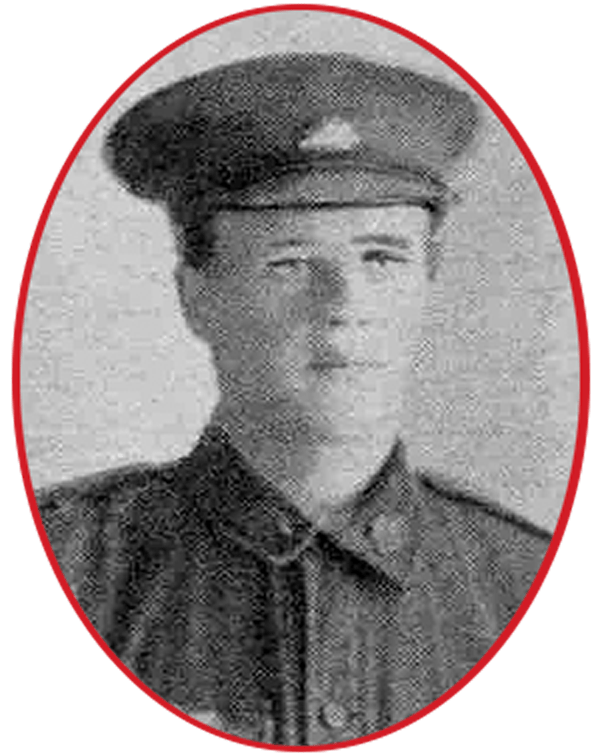 George Henry Hughes, born at Emmaville, New South Wales, went to school at Apple Tree Creek, near Childers, Queensland, before the Hughes family moved to the Granite Belt. He was a miner and farmer before he enlisted. At the age of 27, together with brothers, William and Charles, George travelled to Toowoomba where they enlisted on 7 September 1915.

Three fine young men – the Hughes Brothers, of Glen Aplin – some time ago volunteered for the front, and they arrived home this week on final leave.  They were last night farewelled at the “Union Hotel”, and each presented with a safety razor.

George departed Brisbane on active service on 31 January 1916 aboard HMAT Wandilla. He had joined the 9th Reinforcements of the 26th Battalion but upon arrival in Alexandria, Egypt, he transferred to the newly formed 2nd Pioneer Battalion. Attached to the 2nd Infantry Division, the 2nd Pioneers were tasked with light engineering works such as the construction of defensive positions but were also trained and fought as infantry.

On 26 March, George left Egypt aboard HMT Llandovery Castle bound for Marseilles, France, from where he travelled north to the fighting on the Western Front.  The Australian 2nd Division fought in the Battle of Pozieres in July and August 1916 and in the Second Battle of Bullecourt in May 1917. In September 1917, the 2nd Pioneers were in position near Ypres, Belgium, where they supported the 2nd Infantry Division as it prepared for the Battle of Menin Road.

George died on 9 September after being wounded by fragments from a bomb dropped by a German aircraft. Included with the Roll of Honour for George is a letter from Lieutenant Chambers, 2nd Pioneers, written to George’s mother. He told her:

[George] was wounded in several places, by fragments of a bomb dropped from a hostile plane, was taken quickly to the nearest field hospital but died shortly after admission. The wound causing his death being in the stomach. He was buried in the small cemetery attached to this at the village of Dickebusch about one mile south of Ypres. A small recognition by his friends of his great popularity will be placed on his grave, a small cross, but the best we can do out here.

In expressing my deepest personal sympathy with you I voice that of the whole Platoon he was much admired by all for his personal exceptional coolness and at a big attack at Bullecourt last May I was able to recommend him with one other for the Military Medal.

Unfortunately like a lot of other cases all very deserving the authorities did not issue the medal but I hope it will be some satisfaction to you at least to know the opinion of him by those directly in contact with him.

I write these few lines under a sense of formal obligation and hope they may in some way be of some small relief to you. I know I should wish for one thing in this world if I should die for my country and that would be for a friend to mention one to my dear Mother. 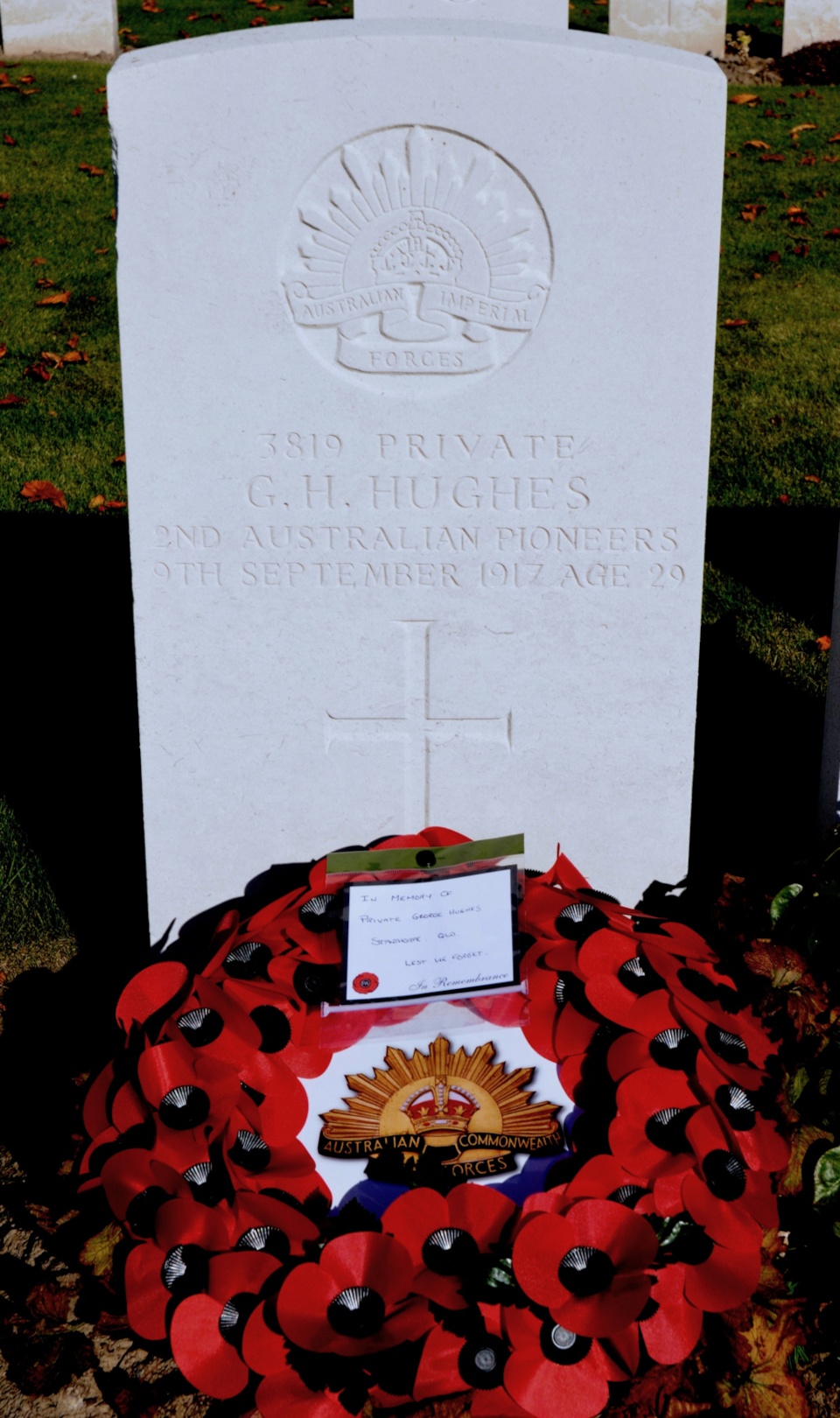 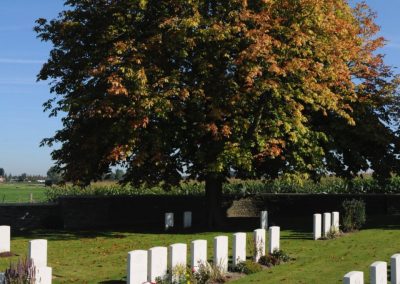 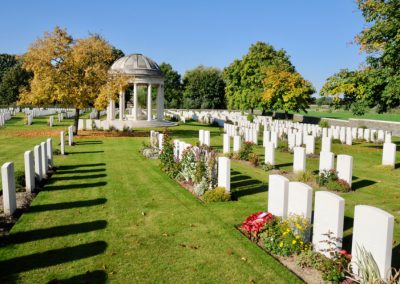 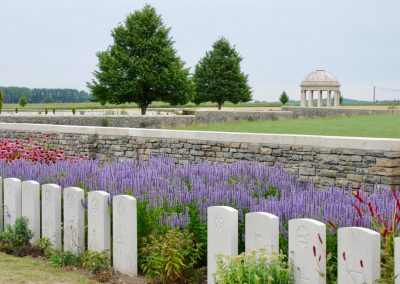 Private Thomas Munnings, D Company, 2nd Pioneer Battalion, told the Red Cross he had been quite close to George when he died and had also been wounded but only slightly:

… so I helped to carry him to the Dressing Station but he died as soon as we got him there. The last I saw of him was being carried out on the stretcher to be buried. I left soon after myself so can’t say exactly where he was buried but the number of the Dressing Station was 72. His appearances were, height about 5’10”, fair, clean shaven, age about 28.

An official wire from the military authorities to the Shire Clerk on Saturday afternoon brought the sad news that Private George Henry Hughes, son of Mr A.V. Hughes, of Glen Aplin, had died of wounds received in action on September 9th last.  The Rev. Father Murphy conveyed the sad intelligence to the parents of the deceased, who reside at Glen Aplin.  Private Hughes is one of four brothers who went to the front to do their bit against the enemy.  One of them has been returned wounded and the other two are still in the fighting line in France.  Deceased was a fine type of Australian Manhood, and everyone who knew him in the district will deeply regret he has had to pay the supreme sacrifice in the defence of his country.  For the parents and other relatives of the deceased the greatest sympathy is felt.

The epitaph on George’s headstone reads:

World War I led to a different outcome for each of George’s three soldier brothers.

William Walter Hughes was 23 years old when he enlisted in Toowoomba. He first joined the 15th Reinforcements of the 5th Light Horse Regiment and departed Sydney on active service aboard HMAT Orsova on 11 March 1916. Shortly after arriving in Egypt, William transferred to the 1st Field Squadron Engineers. Throughout the war, he was stationed in Egypt, where he also served with the 1st and 2nd Light Horse Training Regiments. William left Egypt aboard HMT Malta on 3 July 1919, returning to Australia five weeks later.

Charles Montease Hughes was 19 years old when he also joined the 15th Reinforcements of the 5th Light Horse Regiment. Charles and William had consecutive service numbers and left Australia together aboard HMAT Orsova. When they arrived in Egypt in July 1916, Charles joined his brother in 1st Field Squadron Engineers. However, on 5 August he was admitted to hospital with a serious knee injury which he apparently suffered when a horse fell on him. Charles’ knee injury could not be treated in Egypt, so he was sent back to Australia on 2 September. His knee injury did not respond to treatment, so on 22 November 1916, Charles was discharged from the Army as being medically unfit for further service.

He was determined to re-enlist and on 27 June 1917, an Army medical officer determined that he had recovered sufficiently from his injury to rejoin the Army. Charles re-enlisted in Brisbane on 12 December 1917, just three months after his brother George had been killed. Charles joined the Light Horse Reinforcements and left Sydney aboard SS Port Darwin on 30 April 1918 but had to disembark at Albany, Western Australia, because his knee injury flared again.

The Hughes family of Glen Aplin, this week put up a record for they are doing their bit in the war, and district by the enlistment of the fourth son.  Previously three sons – Messrs G.H. Hughes, W.W. Hughes and C.M. Hughes enlisted and long ago left for the front.  This week Mr. C.W. Hughes, the fourth son, enlisted at the local recruiting office, making, as we have said, a record for the district.  They are all fine specimens of Australian manhood and when they get into holds with the Huns they can be relied upon to give a good account of themselves.

Claude joined the 22nd Reinforcements of the 9th Battalion and left Brisbane aboard HMAT Marathon on 27 October 1916. He arrived in England on 9 January 1917 and underwent further training until he left for the Western Front in May.  He served with the 49th Battalion in France until wounded in action on 5 April 1918 at Dernancourt. Claude suffered a gunshot wound to the thigh and spent the next month in hospital. He rejoined his battalion but spent the last three months of 1918 in hospital in France suffering from seborrhoea, a chronic skin disorder. Claude returned to Australia from England on 9 February 1919. He was discharged as medically unfit in May 1919 due to an acute inflammation of the middle ear.