Tragedy and war go hand in hand, as highlighted by the story of Henry Williamson, of Ballandean, and his best mate John Busiko, of Bowenville. Henry and John were two young Queenslanders who left Australia together on active service in late 1917. Henry was described as being “a nice, quiet, young fellow”. Following training in England the pair joined the fighting on the Western Front in mid-April 1918. They survived for just two weeks. While they rested in a dug out at Villers-Bretonneux, France, a shell exploded at the door, blowing the legs off both young men. The two friends died later the same day. Henry was 21 years old and John was 19. 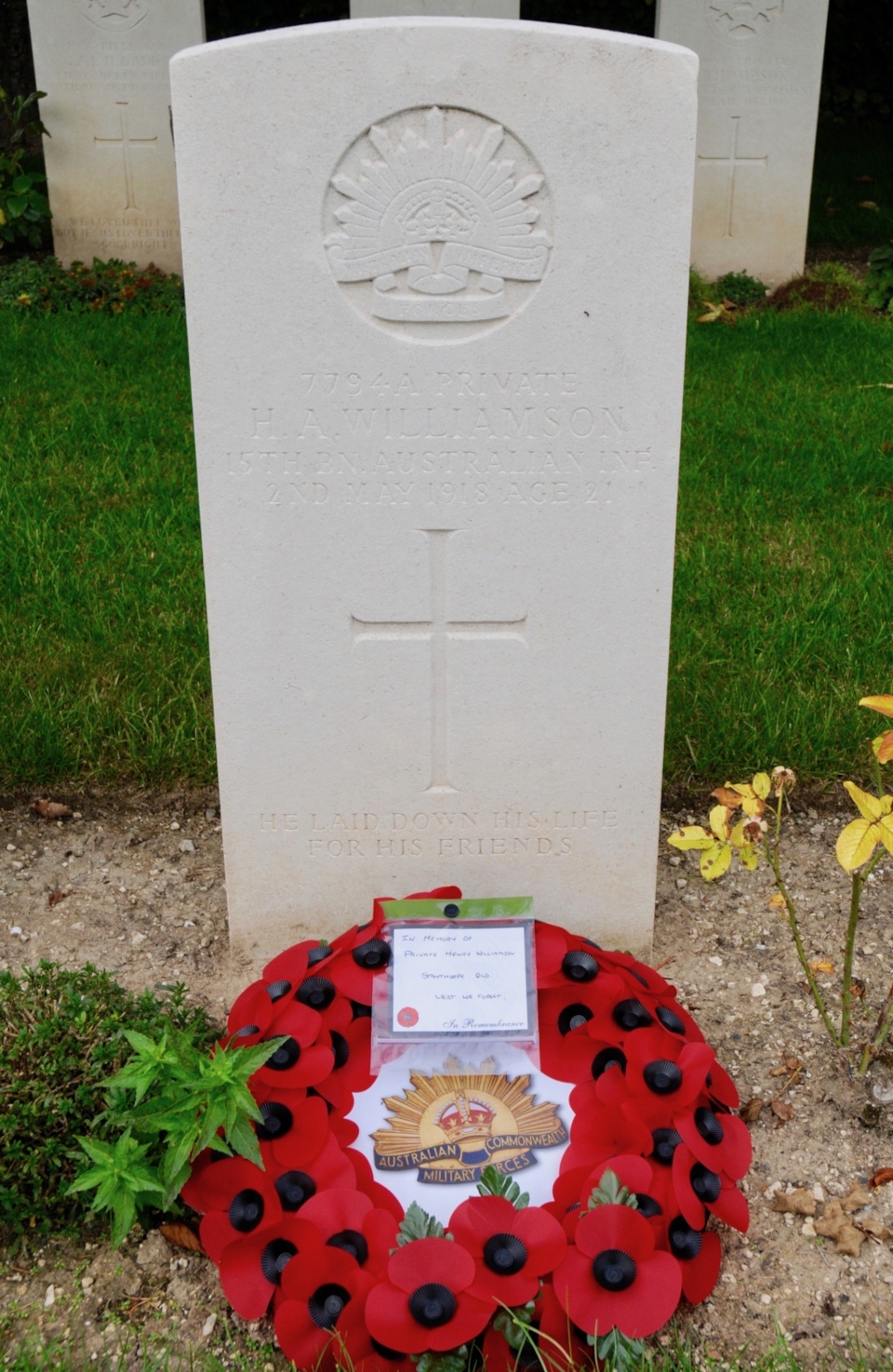 Henry Alexander Williamson was born in 1897 in Taranaki, New Zealand, the son of Alexander Henry Williamson and his wife Lilly Maria.

Henry was only four years old when his father died on 30 March 1901 when the family was living at Spring Grove, Ballandean. Henry worked as an orchardist before enlisting in the Australian Imperial Force (A.I.F.) in Toowoomba on 13 March 1917.

He joined the 26th reinforcements of the 9th Battalion and left Sydney on active service aboard HMAT Euripides on 31 October 1917. He disembarked at Devonport, England, on Boxing Day and was transported to the A.I.F. Training Camp at Sutton Veny, Wiltshire.

He stayed for two weeks at the Medical Board Base Depot at Calais before joining the 15th Battalion in the field on 17 April. The 15th Battalion was in support lines behind Villers-Bretonneux in northern France.

Henry spent only two weeks at the front. He died on 2 May at the 14th Australian Field Ambulance of wounds received in action. Private Henry Williamson was 21 years old.

In Henry’s Red Cross File there are a number of witness statements that provide further details of his death. Private Arthur Vaughan, a stockman from Rowena, New South Wales, said:

In the early morning of May 2nd, Williamson was hit by a shell. The same shell blew the feet off Pte. Bussico [sic]. Williamson and Bussico were both asleep in the same dug out at the time. I saw them after they were hit. They were sent back to the R.A.P. where they died the same day. They were buried side by side in the military Cemetery at Bussy [sic] where crosses mark the graves. Williamson came form S. Queensland. We landed in England together on the same boat Dec, 26/17 leaving Australia 28.10.17. Williamson was a nice quiet young fellow.

Williamson was wounded in the reserve line at Villers-Bretonneux by a shell which landed in their dug-out, between 5 and 4 a.m. Williamson and his bosom chum Busicko [sic] both received leg wounds – legs taken off. I lifted them on to the stretchers, and they were taken away alive, but the Stretcher Bearers told me they lost consciousness very soon. I heard of their death but not of their burial. I believe they were still alive when they reached A.D.S. 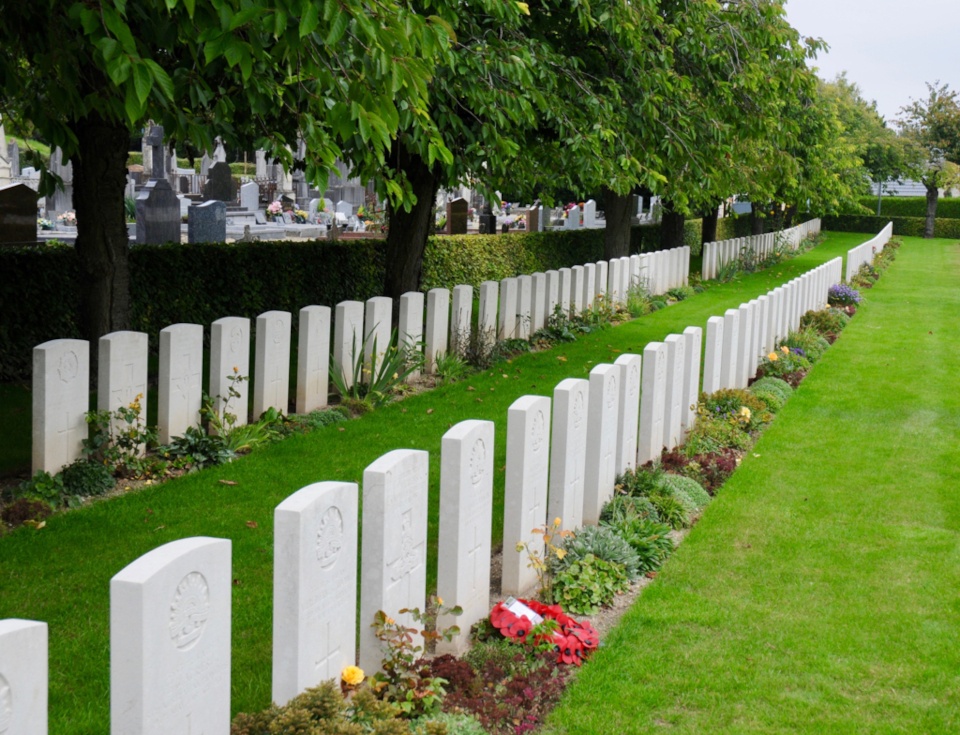 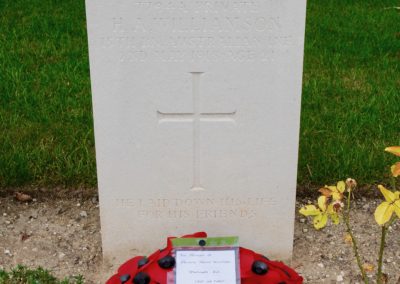 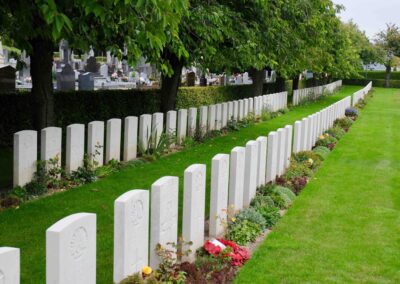 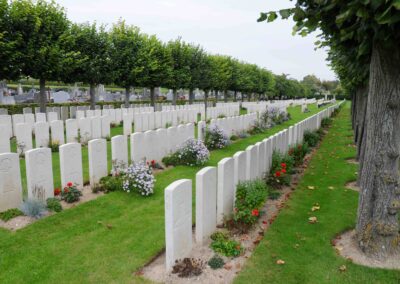 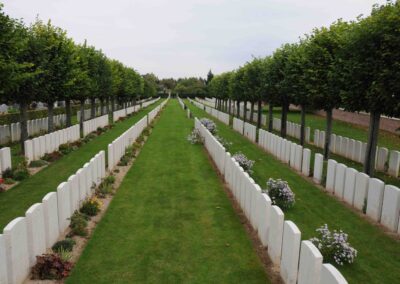 On 17 May 1918, the Stanthorpe Border Post reported Henry’s death:

Mrs. Williamson Dean, of Ballandean, received word from the military authorities last week that her son, Private Alexander Williamson [sic], had died of wounds received in action on the Western Front.  The late Private Williamson left Australia with the 26th reinforcements of the famous 9th Battalion and arrived in England on Xmas Day.  At the time of his death the young hero had just reached the age of 21 years.

In the Brisbane Courier on 23 May 1918, Henry’s remarried mother placed a death notice under DEAN:

And then added this verse.

His country called, he answered.
He sleeps not in his native land,
But ‘neath the foreign skies;
Far from those who loved him best,
In a hero’s grave he lies.

With reference to an enquiry addressed by you… the Officer in Charge at that Administration has requested me to advise you that he is reported to have died of wounds (shell wounds both legs) on 2/5/18, at 14th Australian Field Ambulance Advanced Dressing Station. He was buried in Daours Communal Cemetery Extension, 2¾ miles west of Corbie, France. The usual durable wooden cross bearing name and full regimental particulars was erected over the grave. Further enquiries are being made with a view to ascertaining if Pte. Williamson left a message before he died.

John Laffin, in his book Guide to Australian Battlefields of the Western Front, wrote that Daours Communal Cemetery Extension contains the graves of 1,224 soldiers, 458 of them Australian. The cemetery has two distinctions in A.I.F. history. First it has a greater representation of units than any other Western Front cemetery. Second, the dead Diggers come from a greater spread of battles than in any other cemetery (Laffin 1992, 103).

The epitaph on Henry’s gravestone reads:

HE LAID DOWN HIS LIFE FOR HIS FRIENDS

Henry’s best mate, Private John William Busiko, was a boundary rider from Bowenville, near Dalby. He was the son of Frederick and Emily Jane Busiko. John lived with his mother and family before enlisting in Toowoomba on 7 April 1917. John and Henry had much in common. Both had lost their fathers by the age of 10. Frederick Busiko was killed in a horse riding accident in December 1908. They left Australia together aboard HMAT Euripides as part of the 26th reinforcements of the 9th Battalion. After training at Sutton Veny, England, they transferred to the 15th Battalion in April 1918.  John was only 19 years old when he died. Private John Busiko is also buried in Daours Communal Cemetery Extension.