James Fitzgerald, of Bundaberg, was working as a stockman on Pikedale Station, near Stanthorpe, before he enlisted to fight in World War I. His sister Ellen also worked at Pikedale Station, which was owned by C.F. White who took a leading role in the building of the original World War I Memorial in Stanthorpe. James was on the frontline only 11 days before he was killed in action during the Battle of Passchendaele on 14 October 1917. 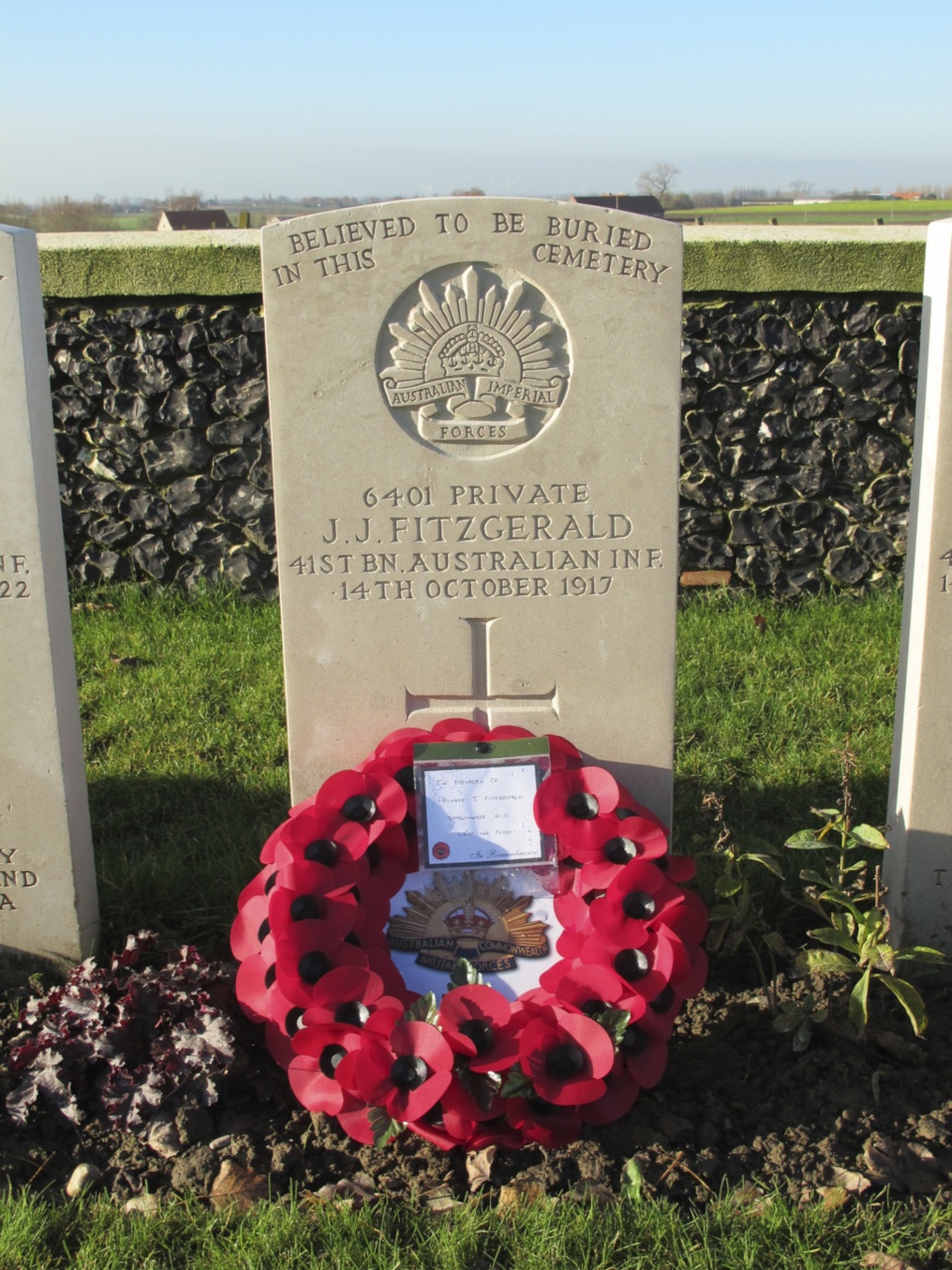 James was born in Normanton, Queensland, on 24 August 1895 and grew up around Bundaberg and Rockhampton. He was the youngest of six children born to Jeremiah and Julia Fitzgerald who were originally from County Carlow, Ireland. The Fitzgerald family was living at Bundaberg when James enlisted in Warwick on 16 October 1916.

Before enlisting, James worked on Pikedale Station together with his sister Ellen. C.F. White, the owner of Pikedale Station, took a leading role in organising the building of the original Stanthorpe War Memorial. According to research by local historian Enid Hamilton, public meetings were held as early as February 1919 to discuss the location and construction of a suitable memorial. It was a motion proposed by C.F. White that determined which soldiers would be entitled to have their names placed on the proposed memorial.

That the names to be placed on the memorial should include all men who enlisted from the Stanthorpe Shire, men who left the Shire to enlist and were accepted and men whose parents resided in the Shire when the said men enlisted.

Despite the efforts and generosity of benefactors such as C.F. White, it took until 6 February 1926 for the Stanthorpe War Memorial to be completed and then unveiled by Major General Sir William Glasgow. Major General Glasgow was commander of the Australian 1st Division and following World War I was elected to the Australian Senate, representing Queensland, 1919-1931.

At the age of 21 years and two months, James Fitzgerald joined the 18th reinforcements of the 26th Battalion and left Sydney on active service aboard HMAT Demosthenes on 23 December 1916. He arrived in Plymouth, England, on 5 March 1917 and travelled on to the Rollestone training camp on the Salisbury Plain.

While at the Rollestone camp, James transferred to the 41st Battalion, joining his older brother Thomas who had enlisted in January 1917. Thomas was awarded the Military Medal for bravery in the field in March 1918 and returned safely to Australia in October 1919.  James and Thomas left England together to join their battalion on the Western Front on 21 August 1917.

In late August 1917, the 41st Battalion was located in the village of Assinghem, in Northern France, where the men were billeted in an old paper mill. Members of the battalion’s intelligence staff, who wrote the book The Forty-First, described the basic living conditions experienced by the men.

The billets were clean, perhaps rather cold, being of stone, but on straw being supplied the men settled down in fair comfort (MacGibbon 1919, 57)

The 41st Battalion spent the next month at Assinghem, preparing for the major battle the men expected was ahead of them, but as yet they had no details. The battalion carried out practice attacks in open and semi-open warfare, finishing with a customary bayonet attack. The style of training was new to the battalion. Instead of practicing the capture and holding of trenches, the men were drilled in following up behind an artillery barrage and capturing ground irrespective of the location of trenches. (MacGibbon 1919, 58) 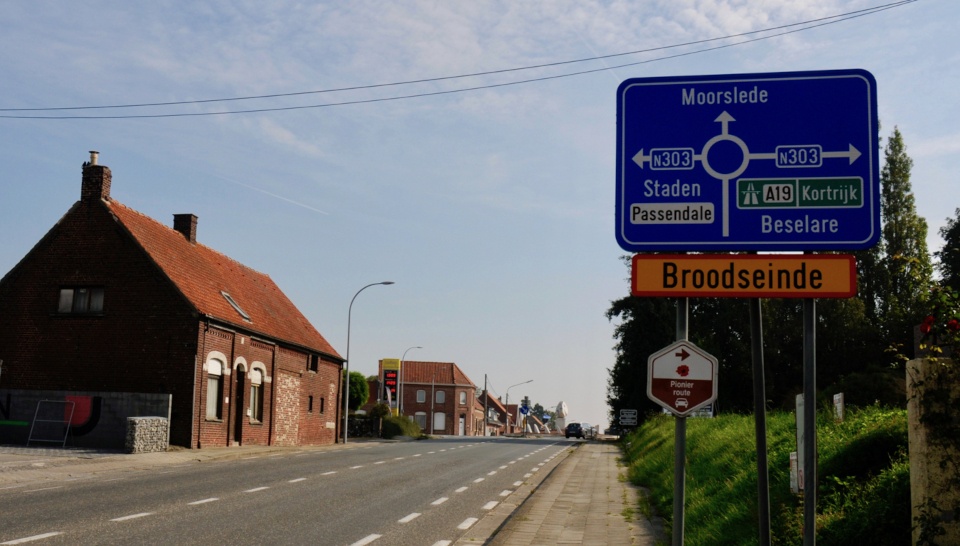 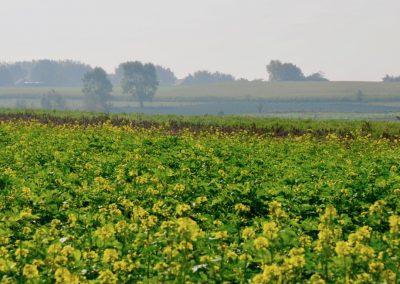 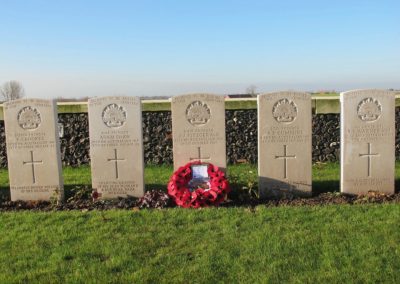 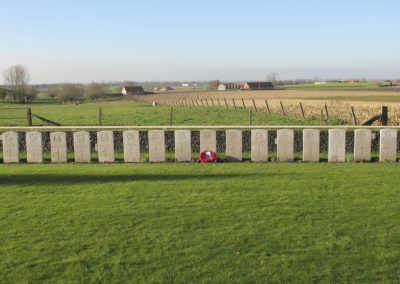 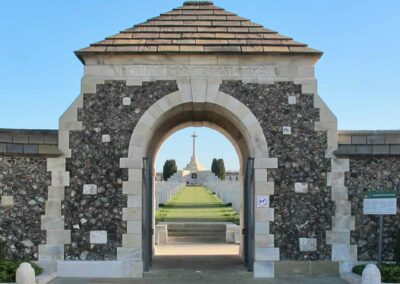 The 41st Battalion, as part of the 3rd Division A.I.F., was inspected by the Allied Commander-in-Chief Sir Douglas Haig, on 22 September. The inspection went well. The men believed, however

these inspections are auguries of ill omen, as there are usually “hop overs” to follow these “pattings on the back”. (MacGibbon 1919, 60)

The 41st Battalion did not have to wait long for the battle they were anticipating. On 3 October, the battalion moved by train to Ypres, in Belgium Flanders, where the infamous Battle of Passchendaele was in full swing. The following day the Australian 3rd Division formed the centre of an Allied attack that became known as the Battle of Broodseinde Ridge. The 41st Battalion, as part of the 3rd Division, attacked along the Ypres to Zonnebeke Railway with the Australian 2nd Division to its south and the New Zealand Division to the north.

The Anzac-led attack on the morning of 4 October was graphically described in the book The Forty-First:

Rain commenced to fall steadily. In waterlogged shell-holes, all longed for the hour of action to arrive. Prompt to the second, at 6 a.m. the British barrage dropped with the sound of thunder. Perhaps never in the history of this war was there such a concentration of artillery in one place as in the Ypres salient at this period. It was impossible to pick out the sound of any one gun; the air was filled with a dull roar, and a scene such as Dante in his “Inferno” could not have imagined was unfolded. Stretching away on both flanks, further than the eye could see, was nothing but pulsating waves of red and white and purple, belching forth a whirlwind of death in front of our advancing infantry. After three minutes of this – Furies let loose – the gathering of troops along the front moved forward, and we with them. The attack commenced in darkness. In the Hades, all recognized formations went by the board, and “columns of lumps” picked their way forward, recking nought [not taking heed] of casualties caused by the enemy barrage. (MacGibbon 1919, 62)

The 41st Battalion went on to capture its objectives and, despite repeated German counter attacks, held the line until relieved by the 66th British Division on the morning of 6 October.

Following just three days rest, the 41st Battalion was once again called to the front line. On the afternoon of 9 October, the battalion took up position on the ridge leading up to Passchendaele village where it encountered the most dire conditions.

No movement could take place during darkness on account of the heavy state of the ground, which was not only scarred and pitted for miles by countless shells, but was one enormous quagmire, soggy, and waterlogged to such a degree, that to call it a sea of mud would be using the very mildest expression. The landscape was one of desolation – a waste strewn as far as the eye could see with dead, and a confusion of impedimenta of war. (MacGibbon 1919, 65)

On 12 October, the 9th and 10th Brigade of the 3rd Division took part in the Anzac-led attack upon Passchendaele village. The treacherous conditions doomed the attack to failure and caused the 3rd Division to suffer 3,199 casualties.  The next day the 41st Battalion was instructed to relieve the 10th Brigade in the front line. The War Diary of the 41st Battalion noted:

The weather was snowery [sic] and cold. Both sides engaged in collecting wounded, men very knocked up owing to privations and only encouragement prevented from going sick. Feet in spite of all precautions in a bad way owing to wet weather. (AWM 1917)

On 14 October, Private James Fitzgerald was killed in action between Augustus Wood and the Ravebeek, close to where Tyne Cot Cemetery is located today. Army records show the Reverend E. Morgan buried him. James’s time at the front had lasted just 11 days.

On 9 November 1917, the Stanthorpe Border Post reported that James’ sister Ellen had received notice of his death:

Mrs. W. Truss (Pikedale) has received word that her brother, Private J.J. Fitzgerald was killed in action in France on October 14th.  The deceased soldier was 22 years of age and a member of the 41st Battalion.  Mrs. Truss also has another brother fighting in the same Battalion.  Private Fitzgerald was in the employ of Mr. C. F. White for two years, previous to his enlistment.

On 16 May 1922, the Australian Army wrote to James’ father to say that a Special Collective Cross had been erected to the memory of his son in the Tyne Cot British Cemetery, Passchendaele, situated 5¼ miles north east of Ypres. The cross bore James’s full regimental description and the date of his death preceded by the words:

Believed to be buried in this cemetery, actual grave unknown.

The epitaph on James’s gravestone reads:

THEIR GLORY SHALL NOT BE BLOTTED OUT

Private James Fitzgerald is remembered on both the Stanthorpe and Bundaberg World War I Memorials.

MacGibbon, Lieutenant Frederick William (Editor) (1919).  The Forty-First. Compiled by Members of the Intelligence Staff. No place. No publisher. Possibly printed in France, In the Field.

The village of Broodseinde, Belgium.

The site of Augustus Wood, near to where Private James Fitzgerald was killed.