James Scott was the business partner and great friend of fellow Scotsman, George Alexander. They lived at Mallow, near Stanthorpe, and owned the Wylie Creek Tin Dredging Syndicate. James and George were in their mid-thirties when they enlisted five months apart in 1916. James served with distinction in the A.I.F., and was awarded the Military Medal for conspicuous bravery in the field twice in two weeks. James and George died three weeks apart in the fighting near Peronne, France, in 1918.

James Scott was born at Comrie, West Perthshire, Scotland. He attended the Stirling High School and trained as a draper. Upon migrating to Australia, James became a miner and grazier. James enlisted in Brisbane on 3 August 1916, stating he was 31 years old. However, according to Mary Alexander, George’s mother, it is more likely James was 37 years old.

James initially listed his mother, Mrs. Cristiana Scott, G.P.O., St. Martins, London, as his next of kin, but she apparently died while he was on active service. In September 1917, James wrote a will leaving his estate to George Alexander, and in the case of his death, to Mary Alexander, who lived in Peterhead, Scotland.

Here the men were trained in the use of the Vickers machine gun. Each gun required a team of men. Only physically fit and intelligent men were accepted into the Corps due to the weight of the equipment and technical knowledge needed to fire and repair enemy damage to the gun (BBC, 2014).

Following two months further training, James proceeded to the front line on 21 May where he joined the 12th Machine Gun Company (12th M.G.C.) in a reserve position at Steenwerck, French Flanders. James was given little time to settle into life on the front line for, on 7 June, the 12th M.G.C. joined the attack at the Battle of Messines. Two sections supported the 12th Infantry Brigade and another two provided covering fire for the attack by the New Zealand Division. The 12th M.G.C. advanced into positions to the north and south of the village of Messines while under an enemy bombardment of gas shells. Casualties were heavy for the company: 10 men were killed, 25 were wounded and four men were missing in action (AWM, 1916). The company was relieved from the front line at Messines on 12 June.

The 12th M.G.C. spent July mainly training near Neuf Berquin in Northern France, but were on standby to support the 4th and 13h Infantry Brigades near Hill 63 in case of enemy attack. The company returned to the trenches northeast of Messines for two weeks from 8 August. Throughout, enemy shellfire inflicted significant casualties on the company.

Private James Scott was awarded the Military Medal for bravery in the field at Passchendaele in September and October 1917.

On night of 28th/29th September 1917, at Ypres, on Westhoek-Zonnebeke Road, for conspicuous bravery and devotion to duty. The tail end of “B” Company of 16th Battalion, A.I.F. were caught in a barrage of high explosives, and 14 men became casualties. In spite of gas shells and high explosives falling nearby this man undaunted assisted an N.C.O. of 16th Battalion in dressing the casualties, and afterwards removing them to a Dressing Station.

Two weeks later James was awarded a Bar to his Military Medal.

During operations near Zonnebeke on 12th October, 1917. He displayed remarkable bravery and perseverance, continually carrying important messages from Support Line to Company Headquarters, being subjected to very heavy enemy artillery fire and by so doing kept up communications. In addition he rendered valuable services helping to get wounded away. Has been awarded the Military Medal.

Notices of James being awarded the Military Medal and Bar were listed in The London Gazette on 14 December 1917 and 22 February 1918 under the heading:

His Majesty the KING has been graciously pleased to approve of the award of the Military Medal for bravery in the field to the under mentioned Non-commissioned Officers and Men. 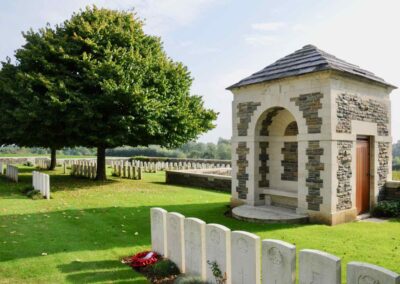 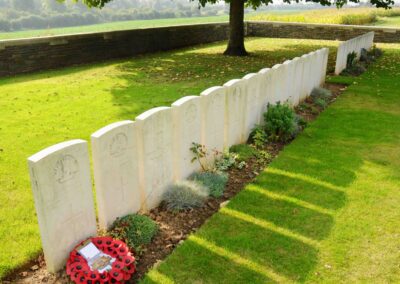 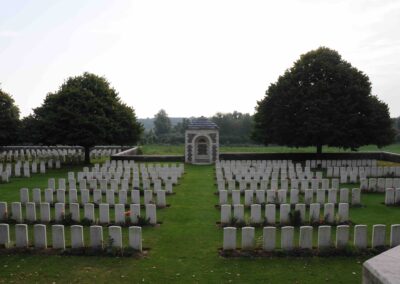 On 1 March 1918, James was detached for duty with the 12th Australian Infantry Brigade School, returning to his company three weeks later.  On 26 March, the 12th M.G.C., in support of the 12th Infantry Brigade, moved to the front line running from Dernancourt along the railway line to Albert in an attempt to halt the German breakthrough that had occurred five days earlier. The defensive position held on 27 March when

the enemy attacked at dawn. Many losses were inflicted on him on the brigade front and about 130 prisoners were taken (AWM, 1918).

In September, the Australian infantry continued to pursue the retreating German forces back to the Hindenburg Line, following the successful Allied offensive that began on 8 August. On 18 September, 10 Allied infantry divisions began an attack on the Hindenburg Outpost Line west of the St Quentin Canal. The Australian 1st and 4th Divisions were heavily involved in the fighting and the 12th M.G.C. was attached to the Australian 12th Infantry Brigade. The attack continued until 20 September and generally succeeded with 12,000 German prisoners taken and over 100 guns captured (Bean 1946, 486). The War Diary of the 12th M.G.C. noted that

taking into consideration the nature of the operation casualties were extremely light, being 3 officers and 14 other ranks (AWM, 1918).

Private James Scott was one of the casualties. Wounded in action on 20 September, he was admitted to the 12th Casualty Clearing Station the next day, listed as “dangerously wounded”. James died on 22 September. Mary Alexander wrote that he was 39 years of age.

The Commanding Officer of the 12th Casualty Clearing Station wrote:

No.607. Pte. J. Scott died here at 5 a.m. 22.9.1918 from the affects of Gunshot Wounds, both thighs, Multiple Wounds right leg and penetrating wound abdomen. He was buried at La Chapellette Military Cemetery (near Peronne) the same day. The officiating chaplain was the Rev. Hopkins (Pres) attached to this unit.

In October 1918, Mrs. Edmund Bent, of Mallow, via Stanthorpe, wrote to Army Base Records regarding James:

I saw in the newspaper that he had died of wounds on the 22nd September 1918. That is all we know & would be very grateful if you will give us all information regarding him. He advised us we would be the first to get word if anything happened to him as he has no next of kin. Anxiously awaiting your reply.

The Memorial Plaque and Memorial Scroll for James Scott were sent to Mary Alexander in 1922.

In the Roll of Honour for James Scott , Mary wrote:

He was a man of high and noble character. He was in co-partnership with George Alexander, 22nd Machine Gun Coy., in a tin mining business and they were great friends. Both of whom have given their lives.