Joseph Patrick Flynn and two of his brothers enlisted in the Australian Imperial Force (A.I.F.)  in less than two months in 1915. Joseph’s twin brother, James Michael Flynn, was first to enlist in Stanthorpe on 29 April, four days after the Anzac landing at Gallipoli. Joseph enlisted also in Stanthorpe on 17 May and younger brother, John Anthony Flynn, enlisted in Brisbane on 18 June. The three brothers left Australia together on active service as members of the 9th Infantry Battalion in August 1915. While in Egypt in early 1916, Joseph remained with the 9th Battalion while James and John were transferred to the newly formed 49th Battalion. Joseph was killed in action on the Western Front on 28 July 1918. James and John both survived the war and together returned to Australia aboard HMAT Warwickshire in May 1919. 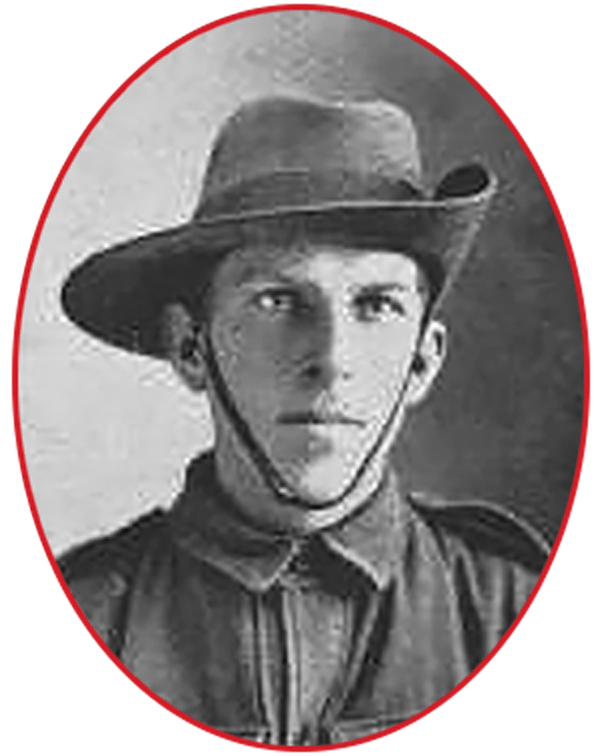 Before enlisting, Joseph and John were living at Lord John Swamp – later known as Wildash – near Warwick. Their brother James lived in Stanthorpe. They were the sons of James and Annie Flynn and they had three older sisters: Winifred, Annie and Julia. Both parents had died before the brothers enlisted. In 1920, John wrote to the Army stating that they had been dead for over 12 years.

Joseph and James were born in Maryborough on 22 September 1893. Joseph attended school in Gympie and worked as a labourer before enlisting in the A.I.F. He was considered to be tall at 6ft 0½ in (184cm).

Joseph joined up with the 9th Battalion at Mudros, on the island of Lemnos, on 18 November 1915. However, the Anzacs evacuated Gallipoli before the 9th Battalion returned to the fighting. Joseph spent time in hospital on Lemnos before arriving back in Alexandria, Egypt, on 4 January 1916. He moved with the 9th Battalion to Serapeum where he found himself in trouble with the Army authorities. Found guilty of being “Absent Without Leave” between 24-28 January 1916, Joseph was ordered to serve 120 hours of Field Punishment No.2 and forfeited five days pay.

Upon returning to Egypt from Gallipoli, the A.I.F. was reorganised into five divisions with the 1st and 2nd Divisions being split to form the 1st, 2nd, 4th and 5th Divisions. The split occurred between February and March 1916 and led to the creation of the 49th battalion. The 49th Battalion comprised 14 officers and 500 other ranks, all of whom were veterans of the 9th Battalion, and three officers and 470 other ranks as reinforcements (Cranston 1983, 1).  In the reorganisation, Joseph remained with the 9th Battalion while James and John were transferred to the new battalion.

In March 1916, the Australian infantry was sent from Egypt to the Western Front. As part of the 9th Battalion, Joseph left Alexandria aboard RMS Saxonia, arriving in Marseilles, France, on 2 April. The battalion moved north by train and

at 11 a.m. on April 5th after meandering for two and a half days, the train arrived at the little Flemish village of Godewaersvelde, not far from Ypres. The battalion was billeted in nearby farm houses… the guns at the front could be heard clearly from here” (Harvey 1941, 106).

The Australian troops were posted to “the nursery” sector south of Armentieres to accustom them to the conditions of the Western Front – conditions so different from those which they had experienced at Gallipoli (Harvey 1941, 109).

The 9th Battalion remained in “the nursery” area, holding the front line and undertaking raids on the German lines, until moving south to fight in the Battle of the Somme. The 9th Battalion joined the attack on the village of Pozieres on 23 July. After four days hard fighting the battalion captured its objectives, but the cost was high: 57 men killed, 271 wounded, and 65 missing (Harvey 1941, 135). On 19 August the battalion returned to the front line at Mouquet Farm.

The route was through the village of Pozieres, and all ranks remarked its thorough destruction, not a house or even a wall being left standing (Harvey 1941, 138).

The battalion held the line, despite the intensity of the enemy artillery fire, until relieved on 23 August. Casualties for the five days were 27 men killed, 125 wounded, and 12 missing.

Following its battles on the Somme, the battalion moved to reserve areas at Reninghelst, near Ypres. The battalion returned to the Somme, near Mountauban, on 21 October where “the mud, rain, and cold were very trying” (Harvey 1941, 149).  The battalion remained in the front line until the end of December under the most arduous conditions brought about by the unbearably cold winter. Sickness became rife among the Australian troops.

In February 1917, Joseph was struck down by pleurisy and influenza. He was treated at a casualty clearing station before being transferred to the Norfolk War Hospital, England. By 30 March, Joseph was fully recovered and following his discharge, was granted two weeks leave. Joseph spent time at training camps at Pernham Downs and Hurdcott before rejoining the 9th Battalion in France in November 1917. In early 1918, Joseph spent further time in hospital in France, suffering from bronchitis. Following his recovery, Joseph rejoined the 9th Battalion on 25 May 1918. 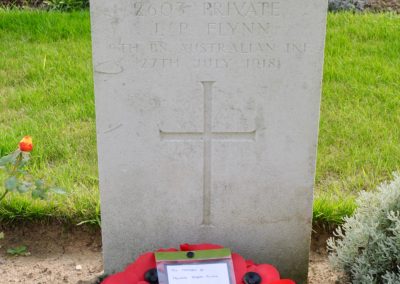 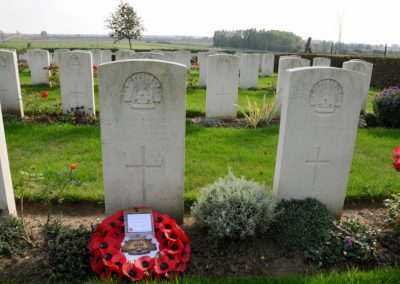 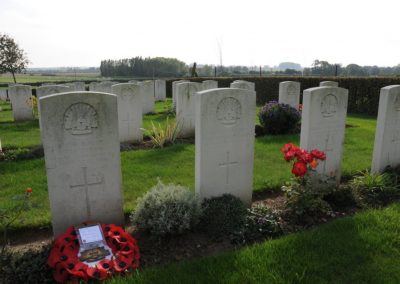 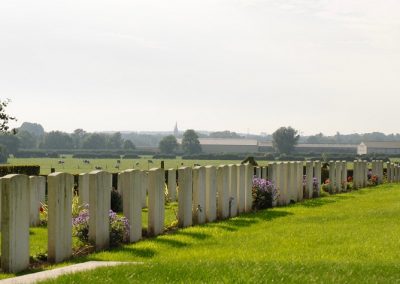 According to its War Diary, on 22 July, the 9th Battalion was relieved of its front line position near Meteren in French Flanders. The battalion moved to support positions near Pradelles where it rested while supplying working parties for the front line on a daily basis.

On 27 July, the battalion’s war diary outlined that 170 men were supplied at night for working parties on forward positions. Casualties were noted as two wounded.

Private Joseph Flynn was one of the casualties; he was reported killed in action on 28 July 1918, aged 24. Joseph was buried in the Borre British Cemetery, 2.5km east of Hazebrouck, France. 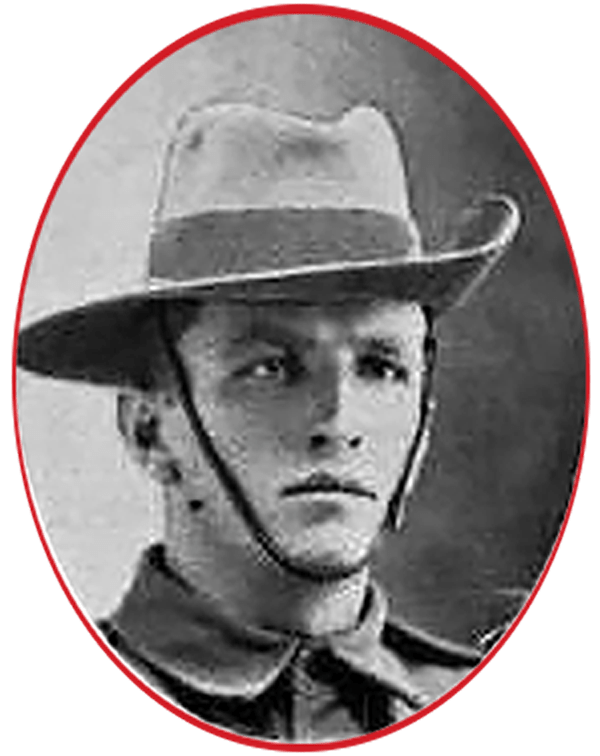 Driver John “Jack” Anthony Flynn enlisted in Brisbane on 18 June 1915, just before his 19th birthday. John listed his sister Mrs. Annie Johansen, of Toowoomba, as his next-of-kin. After departing Australia with his brothers, John also joined up with the 9th Battalion at Mudros on 18 November 1915. Upon his return to Egypt, John was transferred to the 49th Battalion on 27 February 1916. He was promoted to Company Driver on 7 April 1916 and appointed Headquarters Driver on 12 September 1916. Following the end of the war, John returned to Australia with James aboard HMAT Warwickshire, arriving on 28 May 1919.

On 12 April 1967, John applied to the Army for the Gallipoli medallion and badge for his two brothers and himself. He wrote:

We all left Australia during August, 1915, and were at Zeitoun until we went to Lemnos Island to join the 9th Battalion. We were to go to Gallipoli, but were held on Lemnos Island and became part of the 9th Battalion, when that unit came from Gallipoli for a rest. While this rest was taking place, the evacuation of Gallipoli was effected, preventing our getting to that battle area. Should my deceased brothers and I be entitled to these medals, I would be pleased if they could be sent to me- the last surviving brother of the family.

Private James Michael Flynn enlisted in Stanthorpe on 29 April 1915. James transferred to the 49th Battalion on 27 February 1916 at Tel-el-Kebir, the same day as John. On 1 September 1916, James was wounded in action in the fighting at Mouquet Farm on the Somme. He suffered bullet wounds to his right wrist and right side and was sent to recover in hospital in Manchester, England. James rejoined the 49th Battalion in France on 28 July 1917 and survived the remainder of the war unscathed.

James rejoined the Army at the outbreak of World War II. At the age of 45, on 19 October 1939, he enlisted for war service in Brisbane. He was living at Dalveen where he worked as an orchardist. James was appointed Sergeant in the 1st Australian Service Training Battalion and later the 7th and 14th Training Battalions. He was stationed at a number of training camps including Boggabilla, Goondiwindi, and Warwick. James Michael Flynn died in Warwick in August 1962.