Lionel Longhurst was a London-born Applethorpe resident who enlisted in Warwick in March 1916 and died 18 months later on the Western Front. Within weeks of arriving on front, Lionel fought in the Battle of Passchendaele. Wounded in his first major action, the Battle of Menin Road, Lionel returned to his battalion for the Battle of Broodseinde Ridge in which he was seriously wounded. He died on 8 October, three days after being admitted to hospital in France. 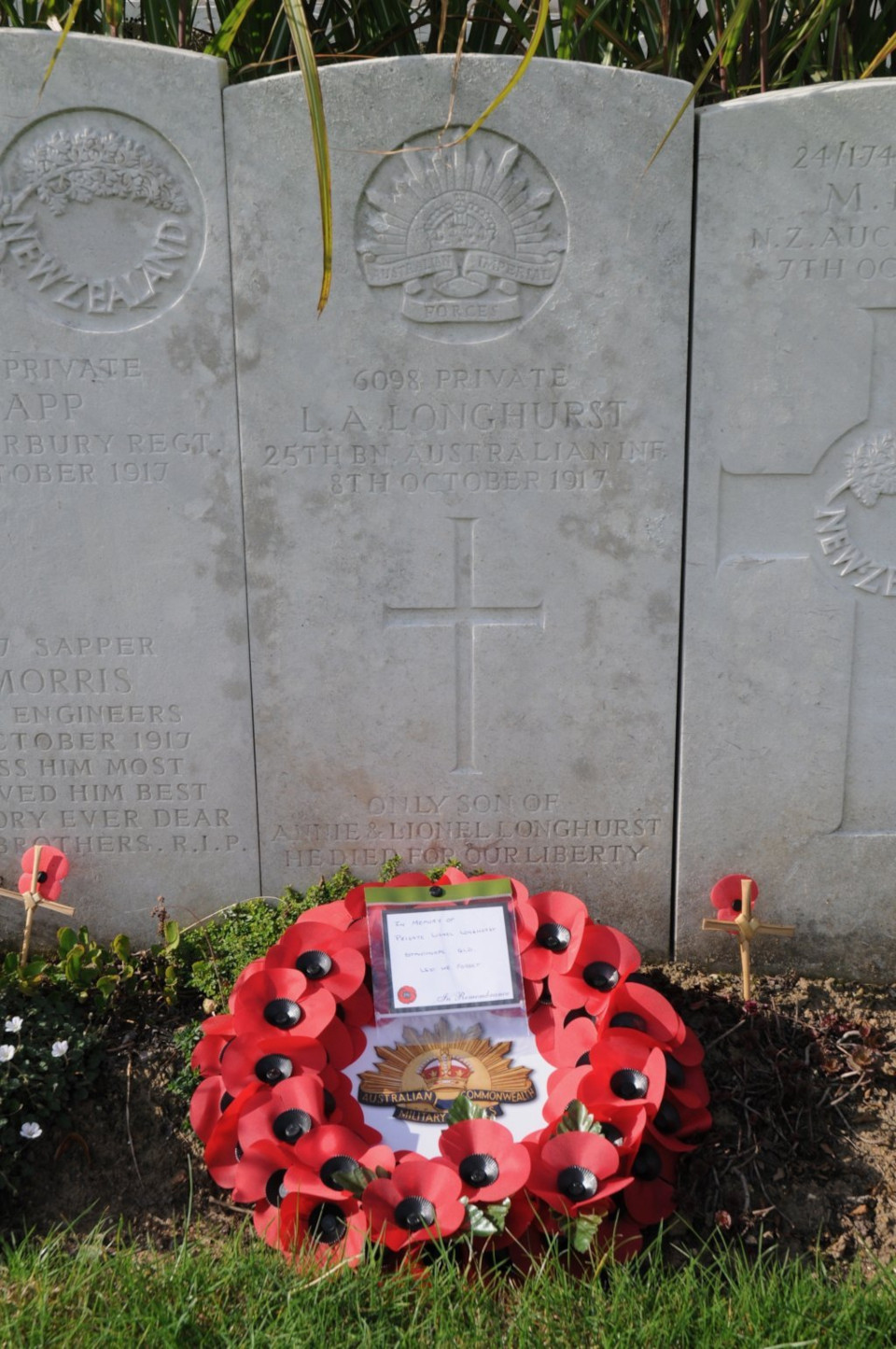 Lionel Longhurst, born in Brixton Hill, South London, was the only son of Lionel J. and Annie Longhurst who later owned Mount Riga Orchard, Applethorpe, Queensland. Lionel attended the National School in Cobham, Surrey, then served as an officer’s steward in the Royal Navy for seven years.

The Longhurst family emigrated to Australia just before the beginning of World War I and settled at Applethorpe. Lionel was 24 years of age and working as an orchardist and fencing contractor when he enlisted in the Australian Imperial Force (A.I.F.) on 31 March 1916. He was first assigned to the 49th Battalion and later joined the 17th Reinforcements of the 25th Battalion.

Lionel departed Brisbane for active service on 27 October aboard HMAT Marathon arriving in Plymouth, England, on 9 January 1917. After arriving in England, Lionel underwent training at the Rollestone Camp on the Salisbury Plain. Lionel was promoted to Temporary Corporal on 6 March and attended, and qualified, at the Commission School at Candahar Barracks, Tidworth, between March and May 1917. Lionel left England on 14 June to join the fighting on the Western Front. He joined the 25th Battalion in the field on 2 July where he reverted to the rank of Private.

The Battle of Passchendaele, also known as the Third Battle of Ypres, began on 31 July 1917. The first involvement of Australian infantry was in the Battle of Menin Road, on 20 September, when the Australian 1st and 2nd Divisions led the attack. Forming part of the 7th Brigade, the 25th Battalion was tasked with leading the advance and securing the first line of enemy defences.

The 25th Battalion moved into the frontline on 17 September and took up positions on Bellewaarde and Westhoek Ridges. The attack, planned to begin at 5.40am on 20 September, went ahead despite heavy overnight rain that made the ground very muddy and boggy (Doneley 1997, 97).

The barrage opened at 5.40am, the densest that had yet covered Australian troops. The leading waves closed up to within 50 yards of it, and followed it on to the objective. The mist following the rain and the dust rising from the barrage gave good cover for the advancing troops. Only one pillbox offered serious resistance, and it was quickly rushed and overwhelmed. The 25th Battalion secured its objective by 6.10am (Doneley 1997, 99).

Although the Battalion secured its objective smoothly, its success came at a high cost: 33 men were killed outright, 10 died of their wounds, 128 men were wounded and four men were missing (Doneley 1997, 99).

Lionel was one of those wounded at the Battle of Menin Road. He suffered a shrapnel wound to the face and was admitted to the 7th Field Ambulance. He quickly recovered and rejoined his unit on 24 September.

In early October, the A.I.F.’s next major offensive in the Battle of Passchendaele was an attack on the Broodseinde Ridge.

Morale was high: Menin Road had been a complete success, and the 4th and 5th Divisions had taken Polygon Wood. It seemed that it would take only one, or maybe two, more efforts to break through and turn the German flank. (Doneley 1997, 101)

The plan called for three Australian Divisions and one New Zealand division to fight side by side for the first time. The four Anzac Divisions formed the centre of 12 Allied divisions that were to attack the main German defensive lines on the Broodseinde Ridge.

The 25th Battalion was designated to lead the 7th Brigade’s attack again. According to its War Diary, on 1 October, the 25th Battalion moved to the Ramparts near Ypres. The next day they moved forward to the front line in the Zonnebeke Sector, where they relieved the 28th Battalion.

The Battle of Broodseinde Ridge was planned to begin on the morning of 4 October, and at 4.30am the 25th Battalion took its place along the start line. A German barrage began falling and it was soon realised that the enemy was lined up for their own attack. Once the Allied artillery barrage began, the Australian infantry were able to advance. Fierce fighting broke out in no-man’s land as the German troops rose from their ground positions. Eventually, the German attack broke down and the Anzacs captured many prisoners of war.

The Anzac Divisions secured the Broodseinde Ridge by 10am. The 25th Battalion captured several hundred German prisoners as a well as a number of machine-guns and trench mortars. However the Battalion suffered significant losses with 40 men killed in action and 195 wounded (Doneley 1997, 103).

Lionel was wounded in the fighting on 4 October. He was initially taken to the 44th Casualty Clearing Station but was moved to the 10th Stationary Hospital at St. Omer, France. He was reported to be in a critical condition having suffered a gunshot wound to the head. Private Lionel Longhurst died of his wounds on 8 October. The next day, Reverend C.R.R. Stack buried Lionel in the Longuenesse (St.Omer) Souvenir Cemetery, France.

The epitaph on Lionel’s headstone reads:

ONLY SON OF
ANNIE & LIONEL LONGHURST
HE DIED FOR OUR LIBERTY 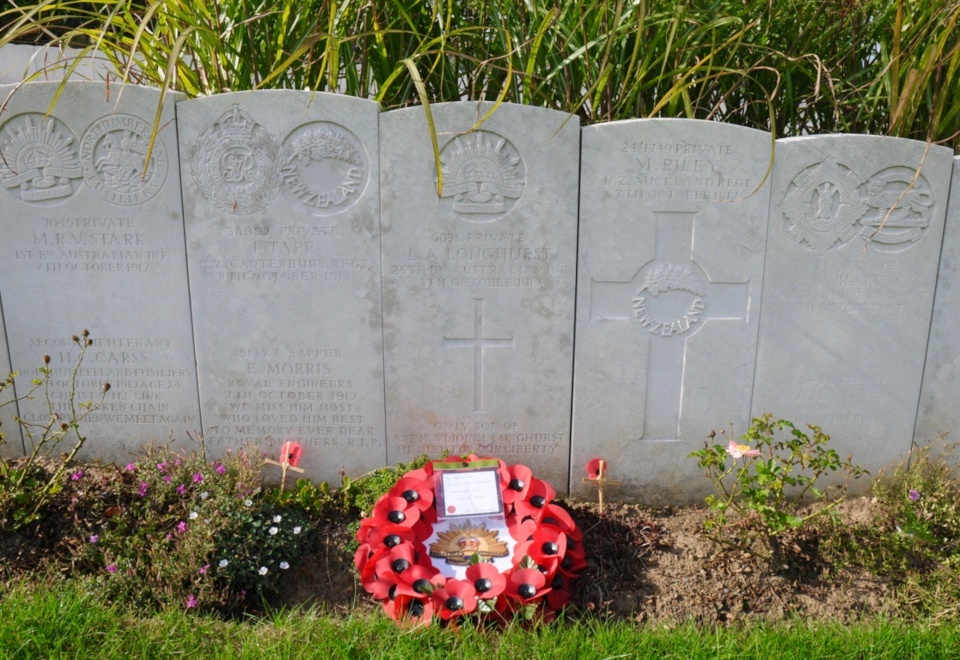 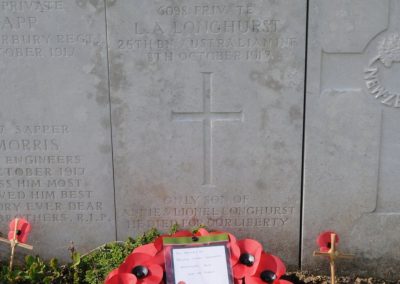 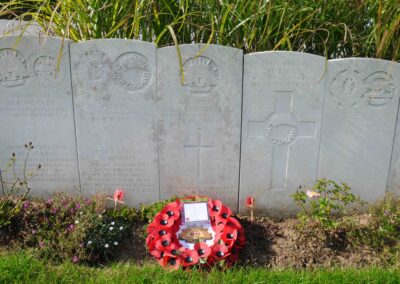 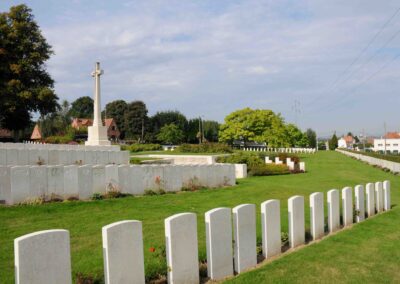 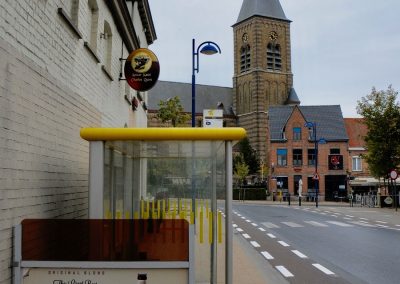 The Officer Commanding the 10th Stationary Hospital wrote about Lionel:

The above man was admitted here with very severe gunshot wound of the head. He was semi-conscious and not suffering any pain. He was operated on to try to relieve the condition but it was too bad to give any chance of recovery. He is buried in the French Souvenir Cemetery St. Omer and a cross will be erected later over the site of the grave.

On Sunday news came through that Corporal L.A. Longhurst, only son of Mr. and Mrs. L. J. Longhurst, of Applethorpe, had died of wounds.  A few days previously word was received that Corporal Longhurst had been wounded, and the later news brought the sad intelligence that he had succumbed to his injuries.  He was 24 years of age and was attached to the 25th Battalion.  In the absence of the Rev. E. Oerton, the sad news was conveyed to Mr. and Mrs. Longhurst by the Rev. D. Fletcher.  For them we feel sure the greatest sympathy will be felt in the loss of their only son, but they will have the consolation of knowing that he died a hero’s death in defence of those rights and liberties which Britishers the world over cherish as the hard-won privileges for which their forefathers fought and died.

In March 1920, Littleton Groom, the Federal Member for Darling Downs and Minister for Works and Railways, wrote to Major Lean at Army Base Records to tell him that the Longhurst family had been unable to find out where Lionel was wounded and what kind of wounds he received.

Sadly, it appears this information had not reached the Longhurst family.

The Village of Passchendaele, Belgium.