Two Stanthorpe brothers, Michael and William O’Connor, enlisted within two days of one another to serve in World War I. Michael was 20 years old and the father of two young children and William was 22 and single. Michael died at the Battle of Passchendaele in October 1917 and has no known grave. William “Bill” was twice wounded in action and fell dangerously ill with pneumonia before he returned home. Bill, like many returning soldiers, suffered without support from what is understood today to be post-traumatic stress disorder. 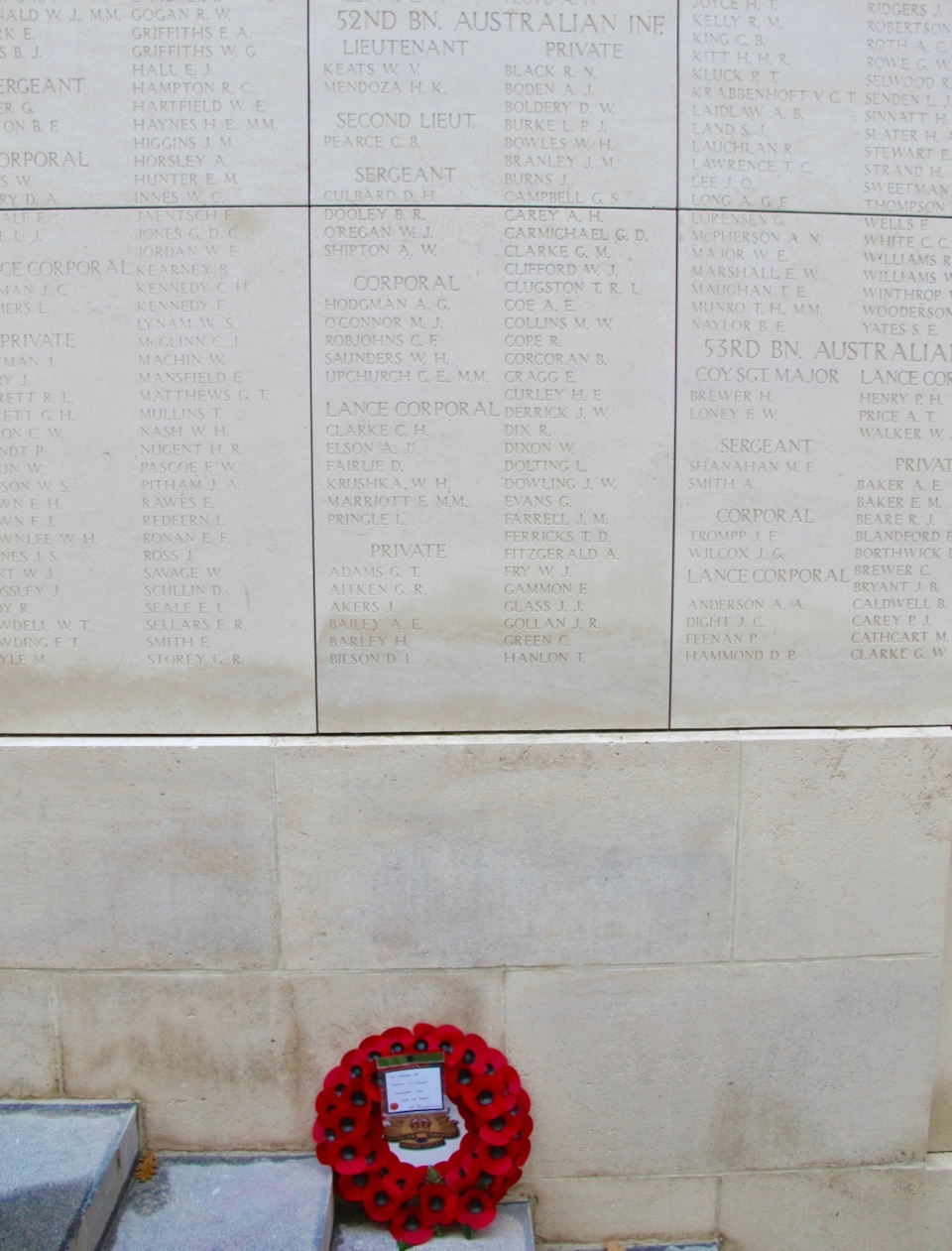 Michael O’Connor married Clarie Holman and they lived in Granite Street, Stanthorpe. They had two daughters: Virginia and Joyce. Michael’s parents, Stephen and Elizabeth O’Connor, as well as his brothers William and Stephen Jnr. all lived in Stanthorpe.

Michael had been working as a labourer before he enlisted in Warwick on 29 May 1916. Two days later, Michael’s older brother, William Henry O’Connor, also enlisted in Warwick. Together they joined the 6th reinforcements of the 52nd battalion and went into training at the Enoggera Army Camp, near Brisbane.

Michael and William left Sydney on active service aboard HMAT Ceramic on 7 October, disembarking in Plymouth, England, on 21 November.  After several weeks of further training, the brothers left England to join the fighting in France on 28 December aboard SS Princess Victoria. On 2 January 1917, they joined the 52nd Battalion in the village of Vignacourt, about 17km northwest of Amiens. The 52nd Battalion was recovering from the Battle of Pozieres in September 1916, a battle that had claimed the lives of nine of its officers and 170 other ranks.

In late February 1917, in northern France, as the German army moved back to the heavily fortified Hindenburg Line, the Germans fortified a number of villages and towns on the approaches to the Line. One such village was Noreuil where the Australian 13th Brigade attacked on 2 April. In the lead up to the attack, the 52nd Battalion moved into the frontline at Lagnicourt on 28 March. On that day, Bill O’Connor received a gunshot wound to his left thigh. After treatment in hospital in Rouen, France, he was moved for further treatment to Graylingwell War Hospital, West Sussex, England. Bill recovered and rejoined Michael and the 52nd Battalion on 29 July.

By this time, Michael had fought in and survived the Battle of Messines. According to the War Diary of the 52nd Battalion, on 7 June, the battalion joined the attack at Messines, and with the support of tanks, captured and held its objective. The following day, a large group of German troops launched a counterattack against the 52nd Battalion. The Diary noted that 20 bombers chased the German troops from their cover and, together with Lewis Gunners and snipers, they continued the attack until there were no remaining German troops. It was recorded that 60-80 German troops died in this action with another 40 wounded and that

the attack finished any active opposition the enemy gave until we were relieved. (AWM 1917)

Michael was lucky to escape unscathed at Messines as the 52nd Battalion suffered heavy casualties in the battle: 69 men were killed and another 253 wounded or missing. 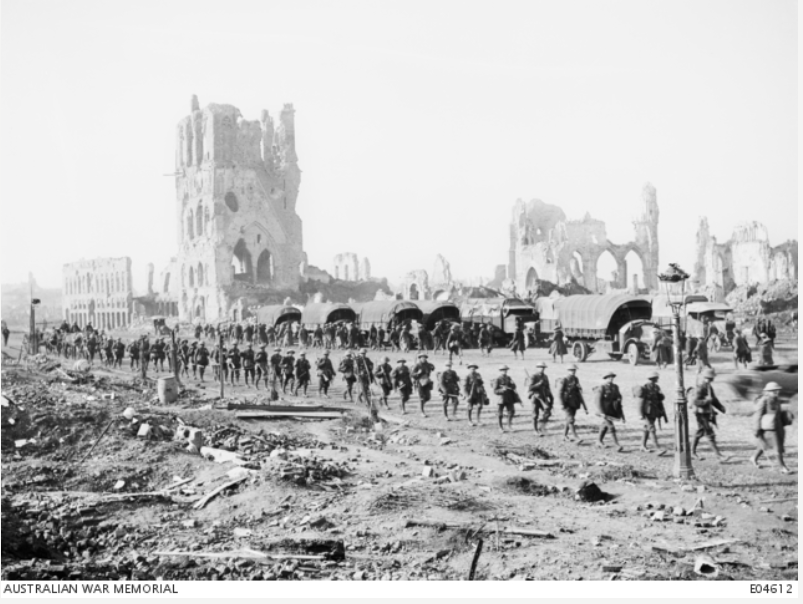 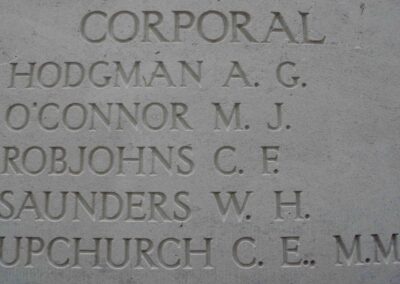 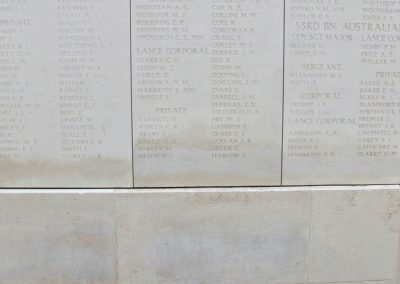 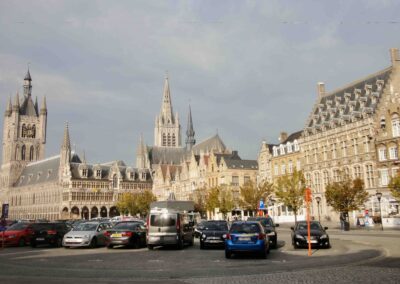 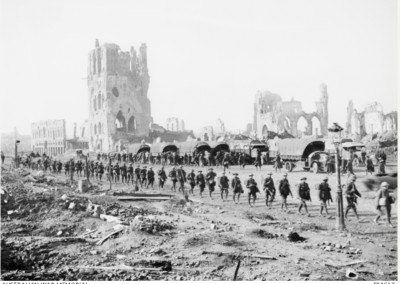 Michael was promoted to Lance Corporal on 17 June. He attended the 2nd Anzac Bombing School in July and was promoted again to Corporal on 17 August. On 30 August, while in the frontline at Neuve Eglise, near Messines, Michael was wounded in action. He suffered a shrapnel wound to his lower back and was admitted to the 53rd General Hospital in Boulogne. After spending some days in a rest camp, Michael rejoined the 52nd Battalion on 16 September.

On 22 September, the 52nd Battalion, as part of the Australian 4th Division, moved to the frontline near Ypres, Belgium, to relieve the Australian 1st and 2nd Divisions that had led the attack in the Battle of Polygon Wood. Four days later, the Australian 4th and 5th Divisions advanced against enemy positions to capture the remainder of Polygon Wood.  The area occupied by the 52nd Battalion was shelled heavily by the enemy, resulting in casualties on a daily basis. The battalion held the line until relieved on 27 September and then moved to a rest area at Chateau de Belge, southwest of Ypres.

The 52nd Battalion had little time to recover as it was called to the frontline again on 10 October to join the attack against the village of Passchendaele. The battalion moved forward via Ypres and the Menin Road and occupied reserve trenches at Westhoek and Anzac Ridges. The 52nd Battalion moved into the frontline on the left flank of the Broodseinde Ridge on the evening of 14 October.

Neville Browning wrote in his book, The 52nd Battalion A.I.F.:

Allied artillery was particularly active throughout the day of October 17th with field guns and howitzers firing counter-battery shoots and bombarding the enemy front line and communication routes. Aeroplanes engaged on artillery spotting were constantly over the enemy lines, correcting the fall of shot from the howitzers. The enemy retaliated and fired a barrage over the entire front and killed eight other ranks from the 52nd Battalion and wounded twenty-eight, including Lieutenant Denne (Browning 2005, 167).

Corporal Michael O’Connor was one of the eight men from the 52nd Battalion killed on this day. Michael has no known grave but his name is recorded with honour on the wall of the Menin Gate Memorial at Ypres, Belgium.

The news which was wired from the Base Records Office, Melbourne, on Friday last, of the death of Corporal Michael Joseph O’Connor, who was killed in action in France on October 17th, was received on all sides with the deepest regret.  The deceased was only 19 [sic] years of age at the time of his death, and for his young wife and two young children, as well as for his parents, Mr. and Mrs. Stephen O’Connor, and other relatives the greatest sympathy will be felt.  Corporal M. J. O’Connor enlisted in Stanthorpe on 29th May, 1916, and was attached to the 52nd Battalion.  He was not long in camp before he proceeded to Melbourne and thence to England and to France, where he has been fighting for some considerable time.  He had risen to the rank of Corporal and he no doubt would have risen in the ranks had he been spared.  He has paid the supreme sacrifice in the defence of his country, and the sympathy of all will go to his sorrowing relatives.  The sad news was conveyed to his wife and parents by the Rev. Father Ryan.

In November 1917, Michael’s brother, Stephen wrote to Army Base Records:

Would you be so good as to furnish me with particulars as to the death of my brother No.2719 Corporal Michael O’Connor 52nd Battalion who I understand died of wounds recently. I would be deeply grateful if you could let me know by return as it would relieve my anxiety.

Stephen, who worked as a groundsman at St. Joseph’s Church in Stanthorpe, received a prompt reply from the Army stating:

The only information to hand to date regarding him is contained in the brief cable message – “ Killed in action, 17th October.” Later official advice coming to hand by mail will, it is anticipated, give further particulars, and these will be promptly transmitted to next-of-kin shown, as [his] wife.

By October 1919, Clarie O’Connor had left Stanthorpe and moved with her daughters to Station Street, Auburn, Sydney. Clarie received Michael’s Memorial Scroll and Memorial Plaque at this address. However, the Army was unable to locate Clarie in late 1923 when they attempted to send her Michael’s Victory Medal. The medal was returned unclaimed and Michael’s file was marked as “untraceable”.

Bill O’Connor was not with Michael when he was killed in action on 17 October 1917 as he had been taken ill on 13 October and admitted to hospital. He returned to his battalion on 22 October to discover his brother had been killed. Bill continued to serve with 52nd Battalion until it was disbanded in May 1918, when he transferred to the 49th Battalion. On 15 September, Bill was fighting in the Jeancourt area, between Peronne and Saint-Quentin, when he was wounded for the second time. He suffered a gunshot wound to the left arm and neck and another wound to his right shoulder and was transferred for treatment to hospital in Bristol, England.

Mrs. O’Connor is in receipt of advice from the Base Records office, Melbourne that her son, Private W.H. O’Connor, is suffering from a gunshot wound in the right shoulder (mild).  This is the second [occasion] on which Private O’Connor has been wounded.

Bill recovered from his wounds and while waiting to return to Australia following the end of the war, was stationed on the Salisbury Plain. On 28 January 1919, he was admitted to the No.1 Australian Dermatological Hospital, Wiltshire, suffering from pneumonia. Bill was reported as being dangerously ill on 12 February, but survived, finally being discharged from hospital on 13 March. Bill was invalided home and arrived in Australia aboard HMAT Marathon on 11 June.

Local Stanthorpe resident, Roy Werner, recalled that Bill O’Connor was well known around Stanthorpe. Roy worked at Pierpoint’s store and remembers Bill would come into town on pension day for provisions and his favourite Penfold’s wine. At the time, Bill was living in a tent at the bottom of Lee’s Mountain, south of Stanthorpe, and was obviously suffering from the trauma he experienced during World War I. There was no support for returned servicemen like Bill and so, like many others, he was left alone to suffer the debilitating effects of what is known today as post-traumatic stress disorder.

Australian War Memorial Collection E04612 : Australians on the way to the frontline in Ypres on 25 October 1917.