Private Neil McMillan, of Stanthorpe, had been married nearly four months when he left Australia to fight on the Western Front in September 1916. After training in England, Neil joined the fighting at the Battle of Passchendaele. He fought in the Battles of Menin Road, Polygon Wood, and Broodseinde Ridge and helped defend Amiens in April 1918. But a high-explosive shell killed Neil while he was in a front line trench near Villers-Bretonneux on 10 June 1918. Mystery surrounds where Neil is buried. Conflicting reports have him buried both in the field where he fell and in the Vaux-sur-Somme Cemetery. Despite the uncertainty, Private Neil McMillan is remembered by a special memorial in Villers-Bretonneux Military Cemetery, France. 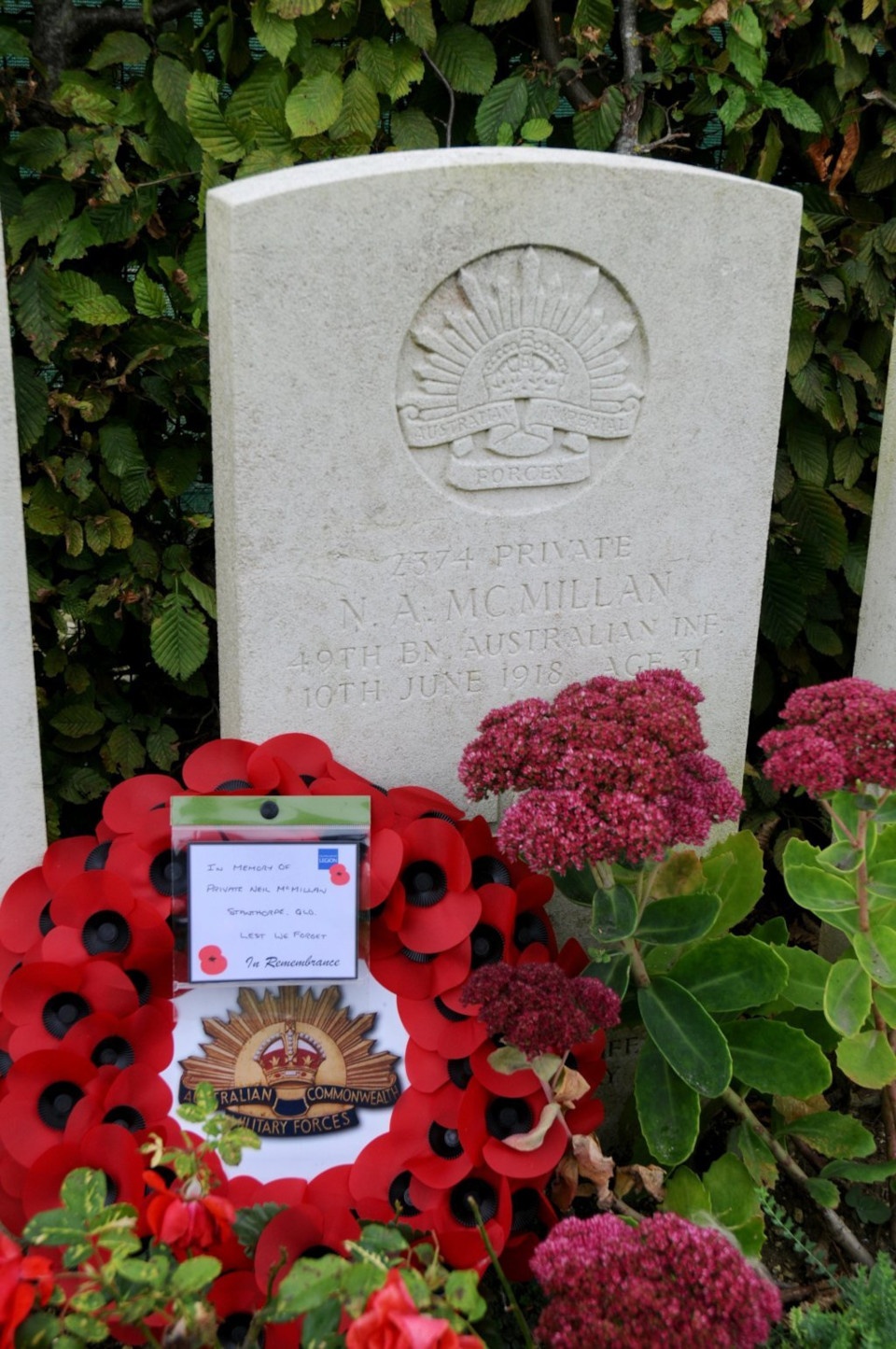 Neil married Sarah Ellen “Poppy” Blair, an 18-year-old waitress, of Stanthorpe on 29 May 1916 at “Camelot”, South Brisbane. Her mother Florence gave her consent for the marriage as Poppy’s father, Thomas, had died. Neil had taken leave from army training for the wedding.

Neil was born at Myrtleford, Victoria, the son of William and Martha McMillan. He attended public school at Yackandandah, where he lived with his parents. Before enlisting, Neil worked as a miner and his service record reveals he was also a billiard marker. A billiard marker worked in a billiards hall where he attended to the players and sometimes kept score.

On 7 December 1915, in Warwick, Neil enlisted in the A.I.F. He was 28 years old. In February 1916, he joined the 42nd Battalion and on 26 August, at the Enoggera Camp, he transferred to the 5th Reinforcements of the 49th Battalion.

On 19 September, nearly four months after his wedding, Neil departed Brisbane on active service aboard HMAT Seang Choon. He arrived in Plymouth, England, on 9 December and went into training at Codford on the Salisbury Plain. He was promoted to acting corporal on 8 March 1917 but reverted to private after a stay in hospital. Neil arrived in France on 13 June to join his battalion fighting on the front line.

marching back to Aigneville which was the furtherest back from the fighting the battalion had been for some twelve months (Cranston 1983, 34).

The battalion remained in rest areas where training continued until it moved back to the front line in February 1918. With the breakthrough of the German forces during Operation Michael in March, the 49th Battalion was ordered to hold the line at the village of Hebuterne. The Australians successfully defended against the German attack but again the cost was high – the 49th Battalion suffered 221 casualties.

On Anzac Day 1918, the 49th Battalion joined the counter-attack to recapture the village of Villers-Bretonneux. The village had been lost the previous day to a German attack that involved both tanks and poison gas. The battalion, fighting as part of the A.I.F. 13th Brigade, together with the 15th Brigade, forced the Germans to withdraw or surrender (Cranston 1983, 46).

Neil again survived the fighting, but his luck was about to run out. 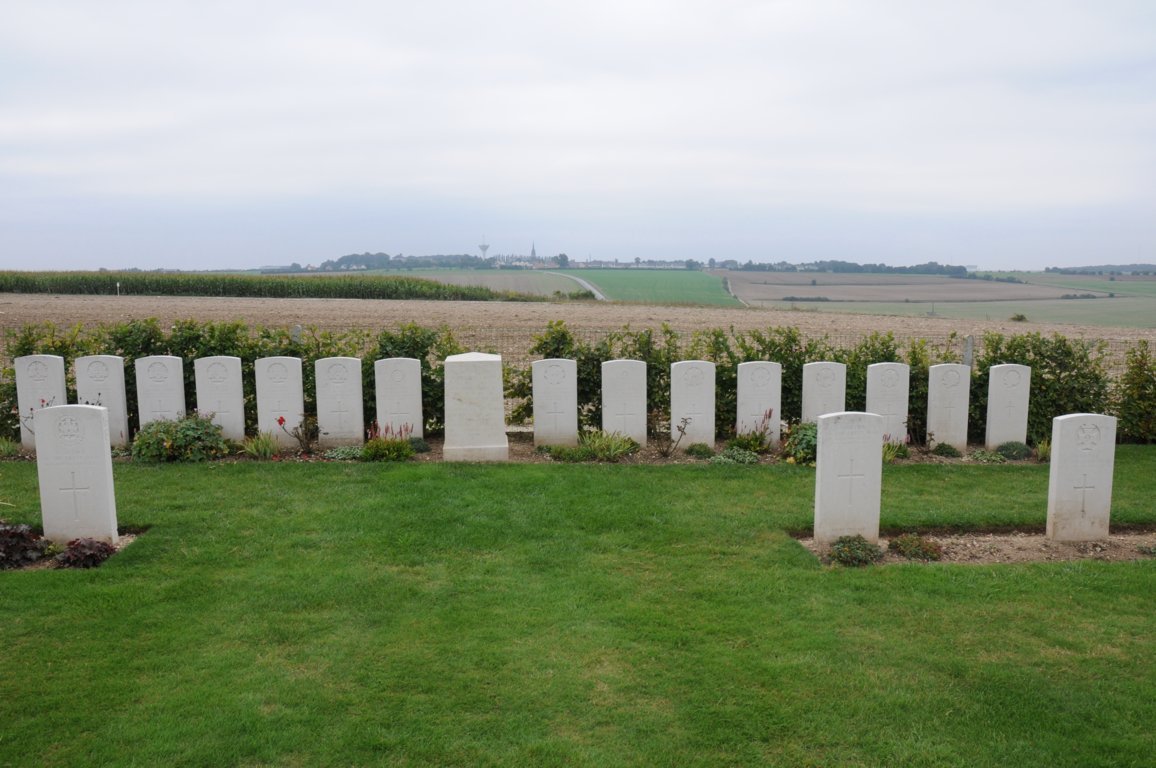 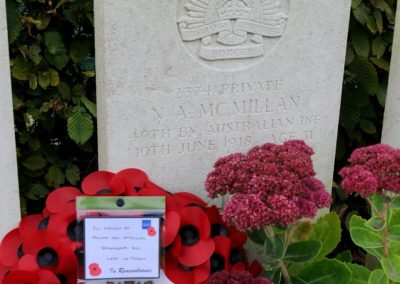 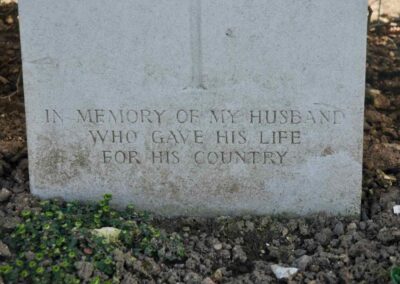 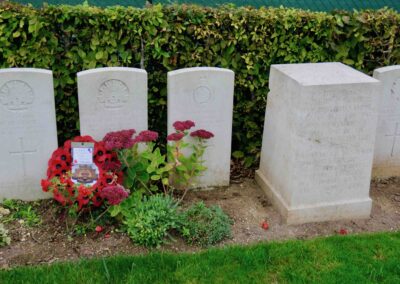 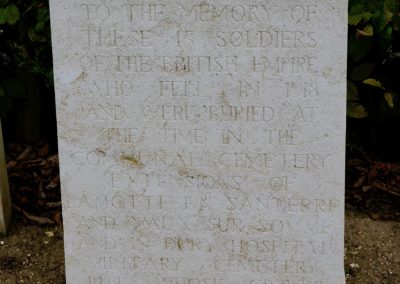 Private Neil McMillan was killed in action on 10 June 1918.

On June 10th 1918 in the trenches at a village near Villers Bretonneux, the Germans were shelling and a shell dropped in the trench killing McMillan and another man, named H.G. Jones [sic] instantly. McMillan was hit on the head. I was only a few yards away at the time and saw McMillan and Jones [sic] both lying dead in the trench. I cannot say where the bodies were buried, but they were taken out of the trench. The ground was held. There was another man of the same name in the battalion. Description – about 5ft.8ins, fair complexion. Called him “Mac”.

He was in D Coy. 15th Platoon; 5ft.8ins, fair, thick set, and about 30 years of age. He was a married man. At Sailly-le-Sec, on June 10th 1918 at 8pm, we were holding the line when a shell killed McMillan instantly, and Turner H.G. 2025. They were buried together at place of casualty on battlefield, but graves were allotted to them and crosses were erected to their memory at Vaux Military Cemetery. I saw the crosses.

Sergeant Thomas Phillips made the following statement regarding Neil McMillan and Harold Turner:

At Sailly-le-Sec about June 10th they were killed. I was about 200 yards in the rear of them and although I did not see them actually killed I know that they were buried in the open close to where they fell just by what then was our front line. Cpl. Stewart, 49th Bn. D. Coy. buried them and if you write to him I am sure you can get details.

Just where Neil is buried is uncertain. His service record states that he was buried at Vaux-sur-Somme Communal Cemetery Extension, 1 3/4 miles north-east of Corbie, France. However, statements in Neil’s Red Cross file suggest he may have been buried in the field, and that a grave and cross were erected in his memory at Vaux-sur-Somme. Similar statements are contained in the Red Cross File for Corporal Harold Turner.

The uncertainly continued in October 1923, when Army Base Records wrote to Poppy McMillan:

…in addition to the Special Collective Cross erected in the Villers Bretonneux Military Cemetery to commemorate the names of your husband and six other soldiers of the British Empire who were originally buried in the Vaux-sur-Somme Communal Cemetery Extension (which was later destroyed by the enemy), a separate permanent memorial will also be erected to the memory of each of the soldiers concerned, and on which will be engraved the full regimental description together with the personal inscription furnished by the next-of-kin.

According to the Commonwealth Wealth War Graves Commission, Villers-Bretoneux Military Cemetery was made after the end of the war when graves were brought in from other burial grounds and battlefields in the area.

The stone memorial in the row of special headstones including Neil’s reads: