The story of Private Robert Johnston highlights the difficulty in keeping alive the memory of those who died in World War I. In Stanthorpe, Robert is both the R Johnson remembered on the original war memorial and the R Jackson on the Honour Roll of the newer memorial in Weerona Park. With so few written records still available, and the passage of time, it is understandable how such memories may fade. Nonetheless, we know that Robert was from Lyra where he grew up with his mate, Fred Hindmarsh. Together they enlisted in Warwick in January 1916 and both died at Messines in Belgium. Fred was killed in action in June 1917 and Robert died there two months later. 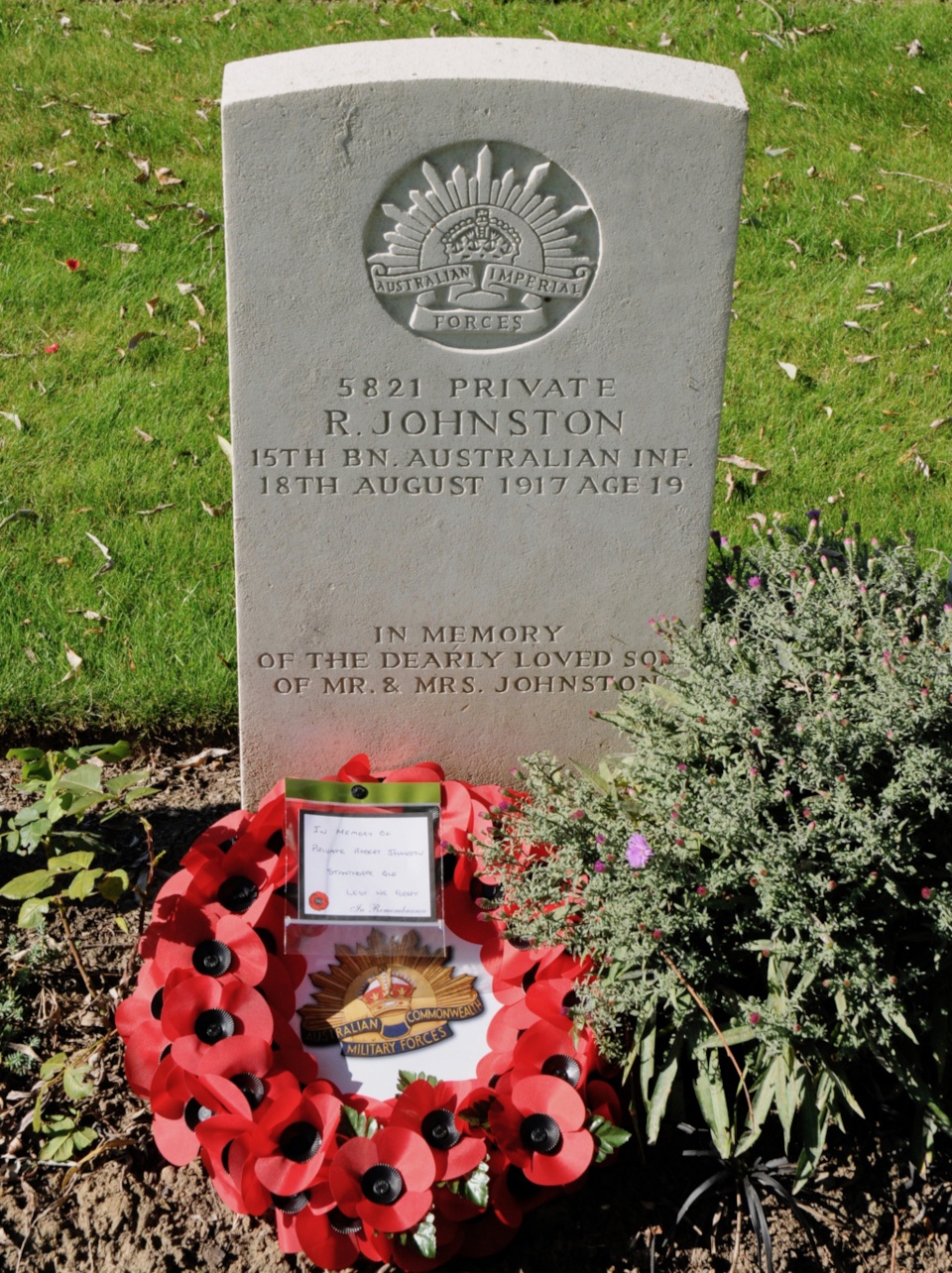 Robert was born at Lyra, the son of John and Jane Johnston of Spring Vale. The Johnston family later moved to Cross Hill, Ballandean. Robert was a farmer before enlisting with Arthur “Fred” Hindmarsh in Warwick on 4 January 1916. Robert was 18 years and two months old and Fred was 18 months older. They joined the 18th reinforcements of the 15th Battalion.

They departed Brisbane on active service aboard HMAT Seang Choon on 3 May, arriving at Suez, Egypt, on 25 June. In Egypt, their paths took a different direction. Robert left Egypt in August for further training in England while Fred remained behind joining the 42nd Battalion later that year.

When Robert sailed for England from Alexandria on 6 August on the HMT Megantic, accompanying him was Fred’s older brother, Eddie. Following training at the Rollestone Camp on the Salisbury Plain, Robert left England to join the fighting on the Western Front on 14 October. Eddie had left for the front two weeks earlier.

Robert and Eddie joined the 15th Battalion fighting in the trenches around Ypres, in Belgian Flanders.  In late October, the battalion moved south to the Somme where it faced the harshest winter weather: “driving bitter winds, snow-frozen ground, and sharp frosts” (Chataway 1948, 142). Over the winter months the battalion moved between the front line and the reserve areas where they were kept busy constructing roads and railways, and generally shoring up the defences.

In early 1917, the 15th Battalion undertook a number of key raids while on the Somme. On 1 February, near Gueudecourt, the battalion attacked a section of the German front line known as Stormy Trench. Although the enemy trenches were only 100 metres from the Australian lines, inadequate artillery support and poor overall planning caused the attack to fail. In the face of relentless German shelling of the captured trenches, the battalion was forced to retire. Although 52 German soldiers were captured, the 15th Battalion’s casualties were 52 men killed or missing and 87 wounded (Chataway 1948, 157).

This was the last major action by the 15th Battalion before their preparations for the First Battle of Bullecourt. On 11 April, Robert took part in the attack by the 15th Battalion on the Hindenburg Line at Bullecourt. The attack was a catastrophe, with the battalion suffering 383 casualties. Robert survived the fighting but Eddie Hindmarsh was killed in action that day. Albert Jolly, of Stanthorpe, also fought with the 15th Battalion. Severely wounded, he was captured and died 10 days later in a prisoner-of-war hospital in Germany.

On 7 June, the 15th Battalion was held in reserve for the first day of fighting in the Battle of Messines. They moved to the front line on 10 June to relieve the 46th Battalion. It was on this day that Fred Hindmarsh was killed in action at Messines while fighting with the 42nd Battalion. Robert again survived and spent the next several weeks with the 15th Battalion moving between the reserve areas and holding the newly captured front line at Messines. 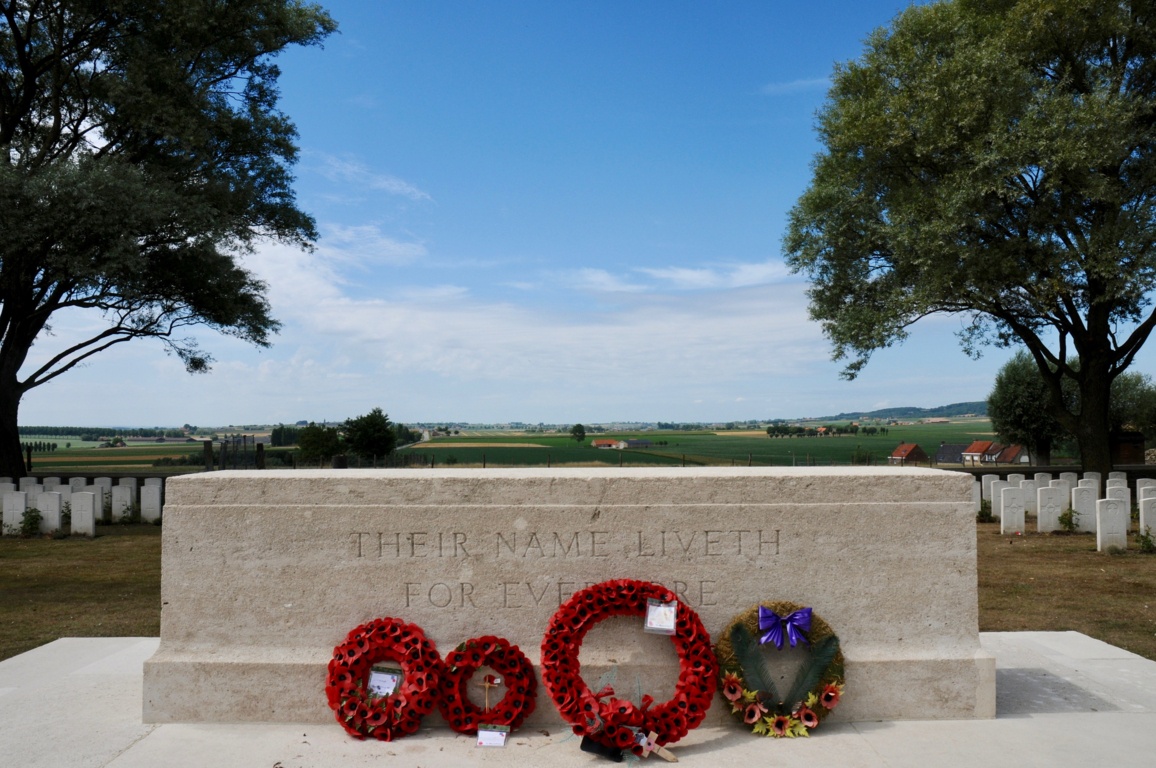 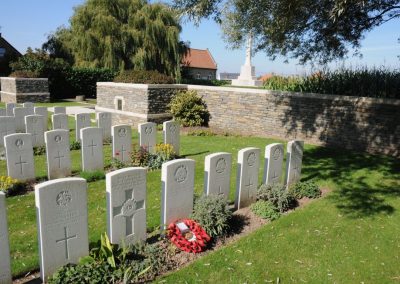 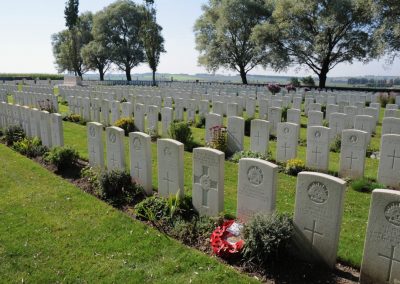 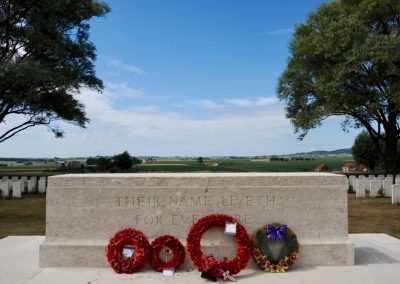 Robert’s luck was coming to an end. There are few details of his demise, however the War Diary of 15th Battalion noted on 18 August:

Enemy artillery barrage put down at 8am. and again at 1.15 p.m. Silenced considerably by our retaliatory fire. (AWM 1917)

Private Robert Johnston died of wounds received in action on 18 August. He was buried at Lumm Farm, 1km north of Messines.

On 13 September, Reverend T.H. Ferguson, the Presbyterian Minister from Stanthorpe, wrote to Army Base Records:

With regard to your letter of 29th Aug to Mrs Johnston, Cross Hills, Ballandean, advising her of the fact that her son No. 5821 Private Robert Johnston, 15th Battalion A.I.F. had been wounded, and also a telegram from Lieut-Col Luscombe dated 11th September stating that the above Soldier has died of wounds. I write to ask you if you could give me any additional information. We would like to know in what battle the lad was wounded, the date he received the wounds and also the date of his death, along with any other particulars you possess or can secure. Thanking you in anticipation.

Reverend Ferguson received a prompt reply, stating that no particulars were yet available other than those contained in the brief cable message. An official letter was expected to contain further details, and these would be forwarded to the next of kin.

Another of our brave men has paid the supreme sacrifice at the front in the person of Private Robert Johnston, son of Mr and Mrs J Johnston, of Ballandean.  The information came on Wednesday last to the Shire Clerk, and the duty of breaking the sad news to the parents was undertaken by the Rev. T. H. Ferguson.  Private Johnston enlisted a considerable time ago, and has been in France for a long time.  It is one of the hard parts of this terrible war that our bravest and best, the men to whom we looked to build up this great country, are sacrificing themselves in defence of the liberties which we enjoy.  We feel sure that the sympathy of the whole district will go out to Mr and Mrs Johnston in their hour of trouble, but they will have great consolation in the fact that their son died in a noble cause.

The epitaph on Robert’s headstone reads:

OF THE DEARLY LOVED SON
OF MR. & MRS. JOHNSTON

In 1920, Robert was re-interred in the Messines Ridge British Cemetery, the same cemetery where Lieutenant Adam Dickie, whose mother also lived at Ballandean, is buried.