The Eedy family made a selfless contribution to Australia during World War I. William, the father, together with four of his sons, George, Peter, Neil and Ronald enlisted and served overseas. Only one failed to return to Australia – Gunner Ronald Eedy, who died in the Battle of Passchendaele in October 1917. Although he was from Sydney, his mother Nellie lived at Ballandean, and so Ronald is remembered with honour on the Stanthorpe War Memorial. 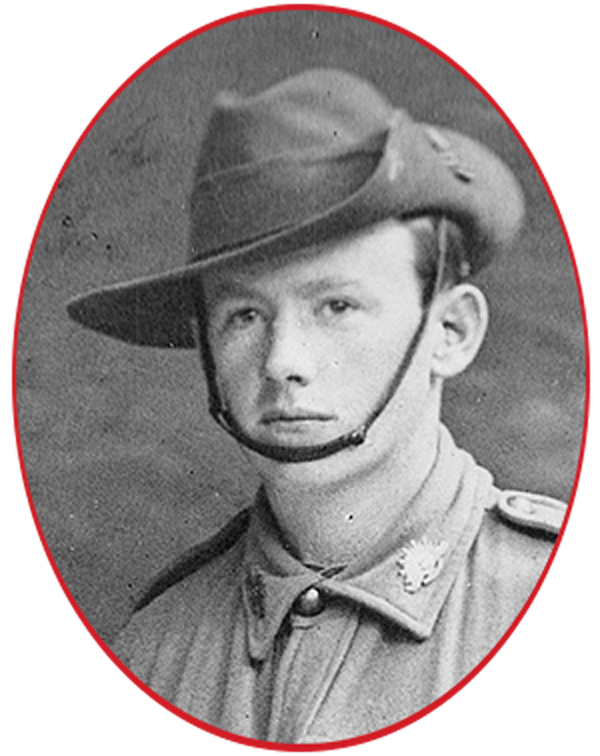 Gunner Ronald Eedy was the son of William and Elenora “Nellie” Eedy. It appears between 1915 and 1920, Nellie lived at “Olive Grove”, Ballandean, near Stanthorpe. Ronald was born in Newcastle and lived in Sydney where he enlisted on 12 April 1915. Ronald worked as a chemist assistant and enlisted as soon as he turned 18. He was smaller than average, standing 5 feet 4½ inches tall (164cm) and weighing just 128 pounds (58kg).

My dear son Ronald.
I have not received your letter as mentioned in yours to your Mother, but I can gather from hers that you want my consent for you to volunteer to serve your Country. Well my dear boy I can understand your feeling that you would like to join your brothers who are already in Egypt on active service. Now to business my dear Ronald, you have my full consent knowing that you would be a credit to any company of soldiers and your past experience as an officer in the Compulsory would stand you in good stead and fit you for the trials & hardships that you would have to face after at the front. Let me know the result of your application at once heard. If there is a Form of Consent, obtain one and send on to me.
Love from Dad.

Ronald joined the 17th Battalion Australian Imperial Force (A.I.F.) and went into training at the Liverpool Camp near Sydney. Together with the 33 officers and 1090 other men of the 17th Battalion, Ronald departed Sydney on active service aboard HMAT Themistocles on 12 May 1915. After one months sailing, with a stopover in Colombo, the 17th Battalion disembarked at Port Suez, Egypt, and moved by train to the Aerodrome Camp near Cairo.

Following a period of intensive training, the 17th Battalion sailed for the Gallipoli peninsula on 16 August aboard SS Alaunia.  After transferring to a smaller vessel, the battalion landed at Anzac Cove on the morning of 20 August. The next day the battalion supported an unsuccessful Anzac attack on Hill 60 before joining a 4th Brigade-led attack on the afternoon of 27 August. The summit of Hill 60 was captured but of the 100 men from the 17th Battalion who joined the attack, four were killed in action and 25 were wounded. Lieutenant Colonel Mackenzie, in his book The Story of the Seventeenth Battalion A.I.F. noted:

the Battle of Hill 60 marked the close of the operations which began on August 6th and was the last major operation of the Gallipoli campaign until the evacuation (Mackenzie 1946, 59).

The 17th Battalion then took up positions defending the line at Quinn’s and Pope’s Posts.

In October 1915, Ronald transferred to the 7th Battery of the 3rd Australian Field Artillery Brigade (3rd A.F.A.) so that he could join his older brother Gunner Peter Eedy. Together they served at Gallipoli until they joined the evacuation of Australian forces, arriving in Alexandria, Egypt, on 26 December 1915. Ronald trained in Egypt until leaving to join the fighting on the Western Front, arriving in Marseilles on 29 March 1916. From Marseilles the brigade travelled by train to northern France, settling into billets at Borre on 15 April.

In May the 3rd A.F.A. went into position at Fleurbaix and joined the attack on the strongly-held German trench and artillery positions. It held that position until mid-July when it moved to La Boisselle, on the Somme, to support the Anzac infantry attack in the Battle of Pozieres. The brigade relentlessly fired high explosive and shrapnel shells in the battle until it was relieved on 23 August. The 3rd A.F.A. then moved to frontline in the southeast of the Ypres Salient. For the remainder of 1916, the brigade was stationed at Flers and Delville Wood on the Somme. 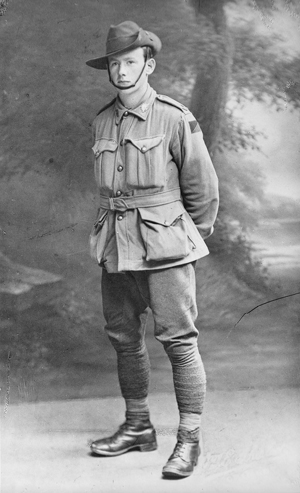 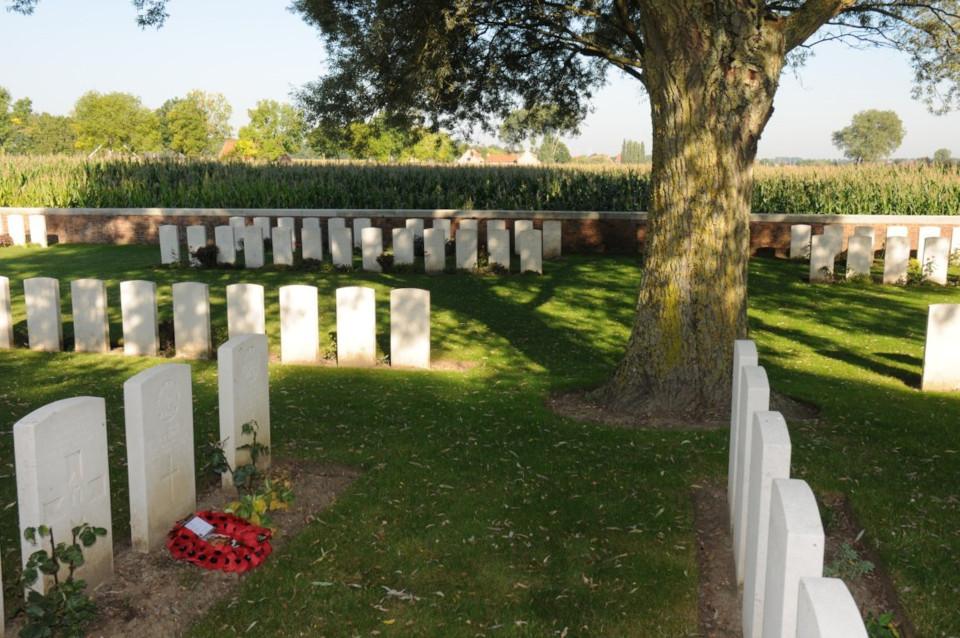 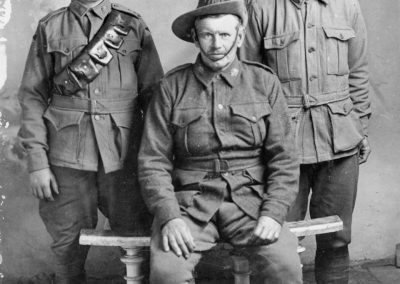 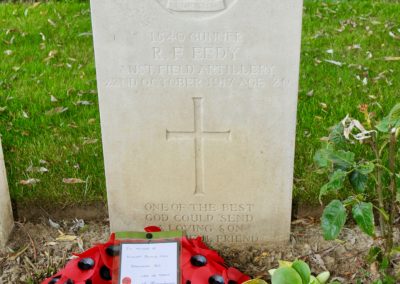 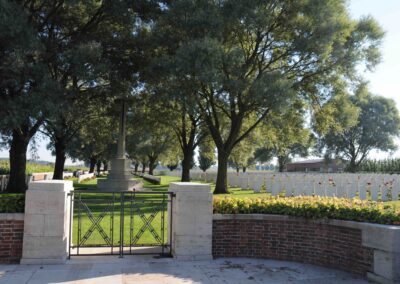 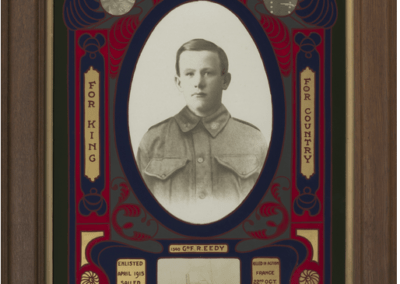 Ronald spent from 10 February until 10 March 1917, firstly in the 6th General Hospital and then 2nd Convalescent Depot, suffering from appendicitis. He rejoined his brigade on 17 March.

In June the 3rd A.F.A. was at Ploegsteert, Belgium, and was heavily involved in the Battle of Messines. On 7 June, the brigade fired over 10,000 rounds of shrapnel and high explosive shells firstly against the enemy front line and then as a covering barrage and S.O.S. support for the advancing Anzac infantry. The artillery barrage continued unabated for two days.

The War Diary of the 3rd A.F.A. noted that on 19 October, it commenced moving into the line in the Battle of Passchendaele. Owing to the poor state of the roads and heavy enemy shelling, the batteries experienced considerable difficulty in moving into position.

On 22 October, Gunner Ronald Eedy was one of five men from the 7th Battery of the 3rd Australian Field Artillery Brigade killed in action; another four men were wounded. The other four who died were Gunner Herbert Jervis, Gunner Cornelius Foley, Sergeant Roy Caston and Gunner Gerard Bruce.

Gunner Sydney Weynand, who was an eyewitness, told the Red Cross what happened that day:

At Zonnebeke near Ypres. Towards the end of October 1917 I was in the battery with Bruce (his first day in action) all his gun crew were killed – I attended the burial service held over the remains of these men by the Chaplain. Bruce was one of five men interred in the same grave at Zonnebeke Wood.

Casualty was going up to battery position at Zonnebeke ridge. I was in the same party. A shell exploded in the centre of our party killing casualty instantly and Gunner Jervis and wounding three others. I was 10 yards away from him at the time of his death. He was buried on the Zonnebeke Road just near where he fell.

It appears that Gunner Ronald Eedy was killed in the same explosion. He was buried with his mates from the 7th battery. Ronald, who was 20 years and six months old, was later re-interred in Perth Cemetery (China Wall), Zillebeke, 2km southeast of Ypres.

The epitaph on Ronald’s headstone reads:

In November 1922, the Army decided that Ronald’s Memorial Plaque and Victory Medal should be issued to his mother, Nellie. Letters sent by the Army to his father at his last known address had been returned unclaimed.

This decision followed a letter that Nellie wrote to the Army Base Records while living in South Kensington, Sydney, on 16 November 1922 saying:

I beg to state that my husband William Ferrier Eedy and the father of the late soldier deserted me in 1915 and is now I am told in the New Hebrides Islands. I received the gratuity payable in respect of both my husband and son, and request that the Memorial Plaque and Victory Medal for my late son be issued to me.

Private William Ferrier Eedy, Ronald’s father, enlisted in Warwick on 14 October 1915. William was 49 years old and joined the 2nd Remount Unit. Remount Units had a maximum age of enlistment of 50 years and were responsible for training horses for the Australian Light Horse. William served in Egypt before returning to Australia and being demobilised in Brisbane in December 1916.

Private Neil Arthur Matthew Eedy was 18 years old when he enlisted in Sydney on 20 December 1916. He joined the Australian Army Medical Corps and disembarked in England in March 1917. He spent the war working in several military hospitals in England before returning to Australia in February 1919.