Private William James Gawith was one of three Stanthorpe men to die in the final Allied offensive that ultimately led to the end of World War I. William died in heavy fighting in an attack by the 25th Battalion near Mont St. Quentin on 2 September 1918. Three days earlier, Private George Alexander was killed by enemy shellfire in fighting between Herbecourt and the Somme Canal. George’s best friend and business partner, Private James Scott died in an attack on the Hindenberg Line, east of Peronne, three weeks later.  Scott was the last man from Stanthorpe to die in battle in World War I. 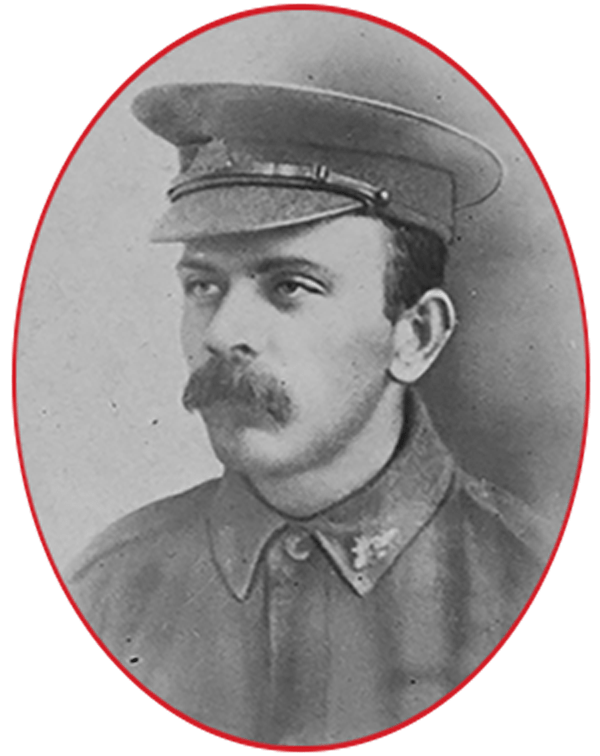 William Gawith was the son of Joseph and Henrietta Gawith, of Lyra, Queensland. Joseph had emigrated from Hellifield, Yorkshire, England, while Henrietta was from West Maitland, New South Wales. William was born on 29 September 1892 at Greenmount on the Darling Downs. His family later moved to Lyra where William grew up and attended school. He was working as an orchardist before joining up to fight in World War I.

William enlisted in Toowoomba on 9 January 1917, joining the 19th Reinforcements of the 25th Battalion. He had had some military experience, having served for 33 days in the Citizen Military Forces at Newtown Park in Toowoomba.

William left Sydney on active service aboard HMAT Wiltshire on 8 February 1917, arriving in Devonport, England, on 11 April. He underwent six months further training at the Rollestone and Fovant Camps on the Salisbury Plain. William left for the fighting on the Western Front on 17 October and one week later he joined the 25th Battalion which was fighting in the Battle of Passchendaele.

The Battalion had arrived in Belgian Flanders on 12 September and immediately prepared for the Battle of Menin Road. As part of the attack by the Australian 2nd Division, the 25th Battalion moved into the front line on the Bellewarde Ridge on the night of 19 September. The 2nd Division was at the centre of a 13km Allied front. The attack began at 5:40am and the 25th Battalion quickly captured its objectives, but lost 43 men killed and 128 wounded (Doneley 1997, 99).

The 25th Battalion suffered further casualties in the unsuccessful attack on the village of Passchendaele on 9 October. When William joined the 25th Battalion, it was positioned in support lines on the newly captured Westhoek Ridge. Despite being in a support line, the Battalion was in range of the German artillery and casualties were suffered on a daily basis.

Every night shells and gas came over. The Germans were now using mustard gas. In the short time in support, the Battalion lost six officers and 202 men gassed (Doneley 1997, 108).

William survived his time at Passchendale and together with the rest of his battalion spent the harsh winter months resting in the Messines sector. Following the German breakthrough on the Somme on 21 March 1918, the 2nd Division was moved south to join the defence against the ongoing attack. On 2 April, the 25th Battalion began an arduous journey to Daours on the Somme, arriving five days later. The Battalion took up a front line position at St Lawrence Farm which it held until relieved in early May. 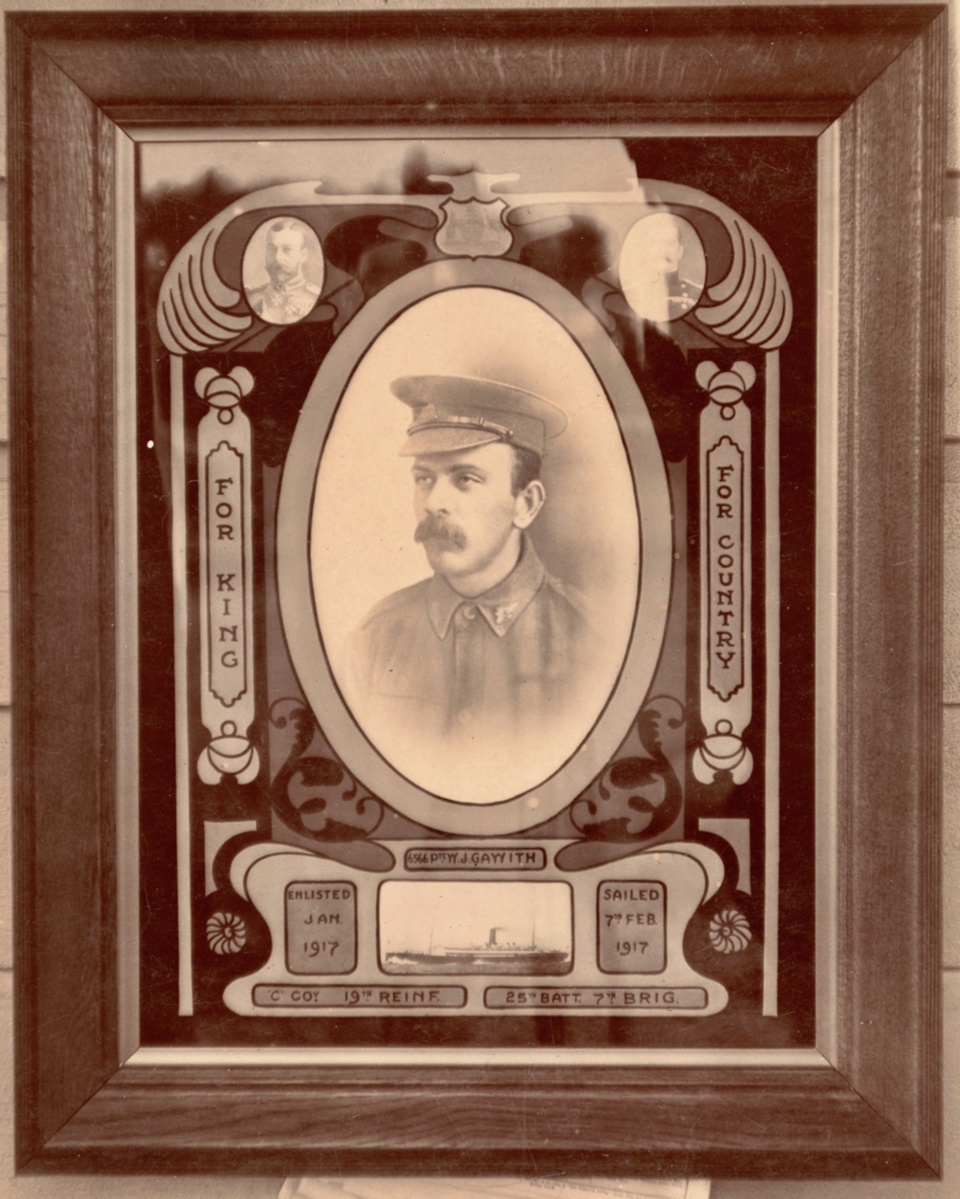 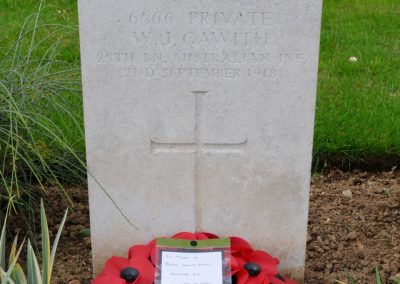 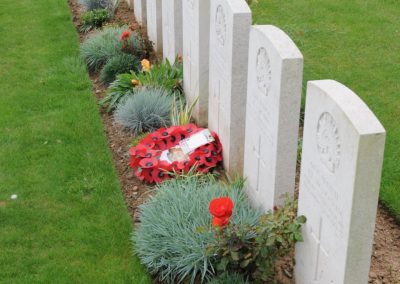 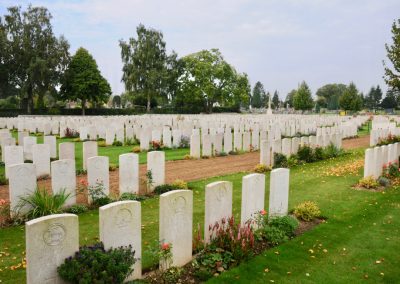 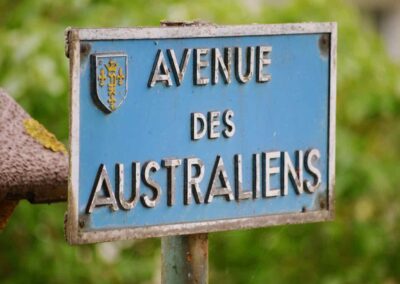 On 28 August, the Battalion moved back to the front line to the west of Proyart. The 25th Battalion joined a planned attack on Peronne and the high ground to the north, Mont St. Quentin, to prevent the Germans from destroying bridges across the River Somme and moving back to the heavily fortified Hindenberg Line.

On 2 September, the 25th Battalion was engaged in heavy fighting in the vicinity of Mont St. Quentin. The attack was planned to clear the eastern approaches to Mont St. Quentin and to secure the flank of the British 74th Division that was advancing to the north. According to the War Diary of the 25th Battalion, the attack began at 5.30am with an artillery barrage but soon the barrage outpaced the attacking troops as they were held up by enemy machine gun fire.

The enemy machine gun fire by this time was extremely hot and the whole line was temporarily checked. All ranks showed great dash and initiative from now on (AWM, 1918).

The Battalion advanced despite stiff enemy resistance. In one enemy post alone, the Australian troops found 17 machine guns and two trench mortars abandoned. Despite the ongoing efforts of the enemy, the objective was reached at 7:20am. At least 60 German prisoners were captured as well as 42 machine guns, three anti-tank rifles and two trench mortars. German casualties were estimated at 50 to 60.

A big percentage were killed by artillery fire and the rest by rifle and Lewis Gun fire and a few with the bayonet” (AWM, 1918).

The casualties for the operation for the 25th Battalion were one officer and 29 other ranks killed and eight officers and 106 other ranks wounded. Private William James Gawith, 25, was one of those killed. He was buried in an isolated grave in a shell hole near barbed wire just east of Mont St. Quentin and 2km north of Perrone, France.

I saw Gawith of C. Company wounded (don’t know where) by machine gun bullet near to me about 6 a.m. at Haut Allaines. He was conscious and was taken back by stretcher bearers (don’t know names) to dressing station where he died. He was in my platoon. Gawith was of medium height, stout build, sallow complexion, about 28 years [sic]. A very good fellow.

Yet another of our brave men has fallen in the battlefield fighting for liberty and freedom. On Monday the sad news came through that Private William James Gawith, son of Mr. J. Gawith, of Lyra, was killed in action on the 2nd September. No particulars have been received, but Private Gawith was on the Western Front, and had seen a good deal of fighting. Much sympathy will be felt for the parents, who are old and highly respected residents of Lyra.

In November 1919, Army Base Records informed Henrietta that William had been re-interred in Peronne Communal Cemetery Extension. According to the Army, the work was carried out with every measure of care and reverence in the presence of a chaplain.