Wallangarra brothers William and Stewart Reid enlisted to fight in World War I. They were the sons of James and Isabella Reid who had left Scotland in 1883 to start a new life in Australia. Stewart was wounded in action in December 1917, but recovered, survived the War and returned to live in Stanthorpe. William was first to enlist and fought with the 31st Battalion on the Western Front. Wounded in the Battle of Polygon Wood in September 1917, he returned to the fighting in February 1918. William was killed by enemy artillery fire on 18 March 1918 and is buried in Cabin Hill Cemetery, Belgium. 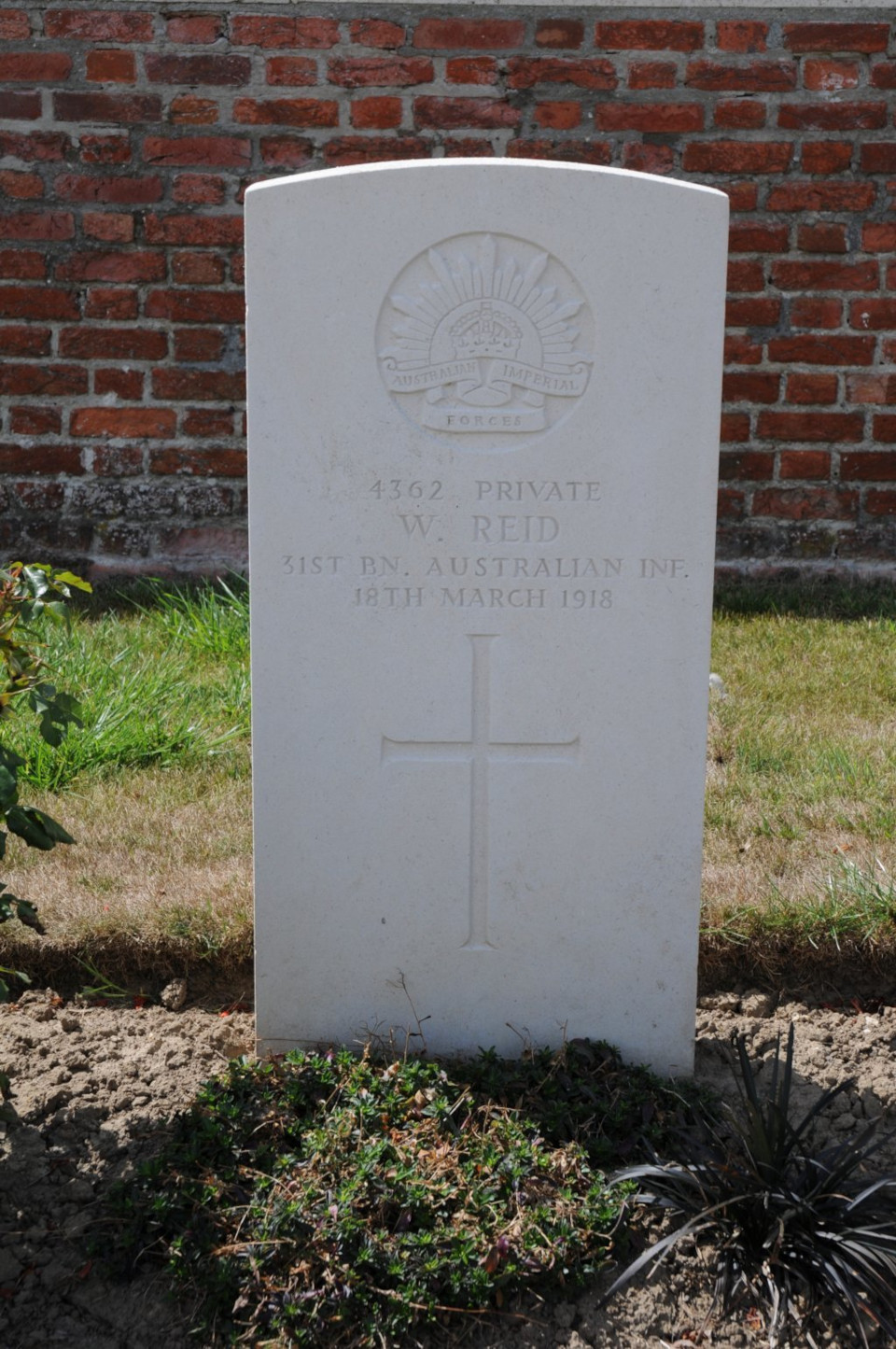 William Reid was the second youngest of nine surviving children born to James and Isabella Reid of Bald Mountain, near Wallangarra.  According to family research undertaken by Stanthorpe resident James Reid (the fourth cousin of William), James and Isabella were from Linlithgowshire, Scotland. James and Isabella, together with their three children, as well as James’ brother William and his wife Jane, and James’ other brother David, set out from Glasgow together to start a new life in Australia. The extended Reid family sailed aboard the Berwick Law, arriving in Moreton Bay on 23 December 1883.

James and Isabella and their children John, Christina, and Elizabeth set up home at Bald Mountain where six more children were born. William, born in 1897, grew up around Wallangarra where he also went to school. William’s service record said that he worked as a farmer.

At Warwick on 17 July 1916, one week before his 19th birthday, William enlisted and joined the 11th reinforcements of the 31st Battalion. He departed Brisbane on active service on 17 November aboard HMAT Kyarra, arriving in Plymouth, England, on 30 January 1917. William spent three months training at the Hurdcott Camp on the Salisbury Plain before he proceeded overseas to France from Folkestone on 3 May.

When William joined the 31st Battalion in the field five days later it was in a training camp at Montauban, France.  William was given no time to settle in, for on 9 May the battalion moved to support trenches in the Buegny-Ytes Line near Bapaume. From there the battalion went into reserve lines at Lagnicourt, in support of the Australian operations in the ongoing Battle of Bullecourt. The battalion was tasked with strengthening the support-line defences and carrying munitions to the front line, while under constant threat of enemy artillery and gas barrages (Browning 2013, 164).

The 31st Battalion then undertook several months training on the Somme. On 29 July, the battalion, as part of the Australian 5th Division, moved north to the Ypres Salient as reinforcements for the Battle of Passchendaele that was to begin two days later. The battalion moved into the Racquinghem area near the France-Belgium border where the battalion underwent weeks of battle training. On 17 September the battalion marched 26km north to Steenvoorde in the Ypres Salient.

The 31st Battalion entered the fighting in the Battle of Polygon Wood which was intended to build on the success of the Battle of Menin Road. On the morning of 26 September, the Australian 4th and 5th Divisions joined an Allied attack across a front of 10km. The Australian divisions captured their objectives but paid a high price. The 4th Division suffered 1,717 casualties.

The 31st Battalion casualties were particularly devastating with 15 officers and 418 men killed, wounded or captured (Browning 2013, 212). 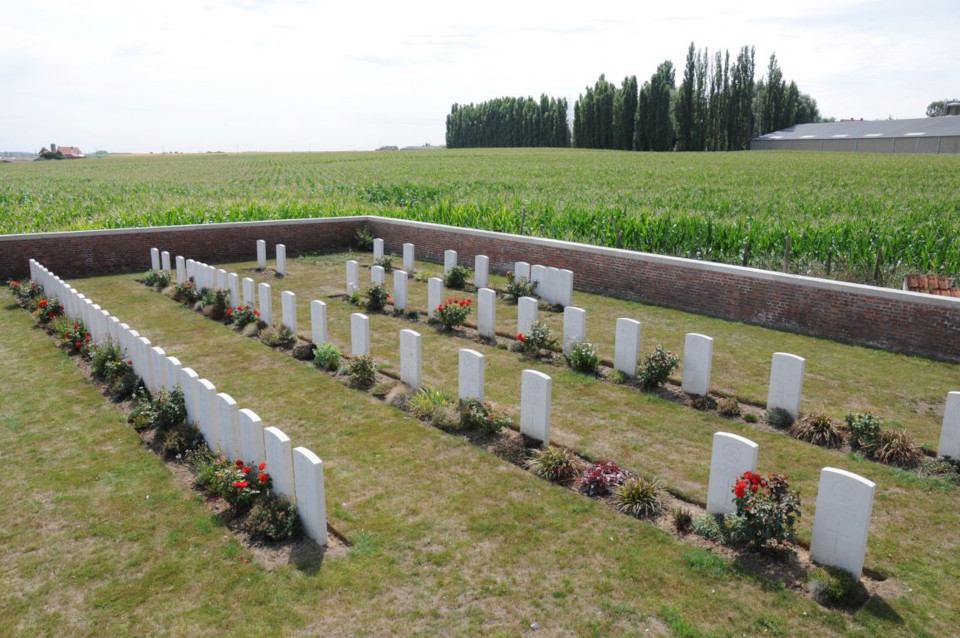 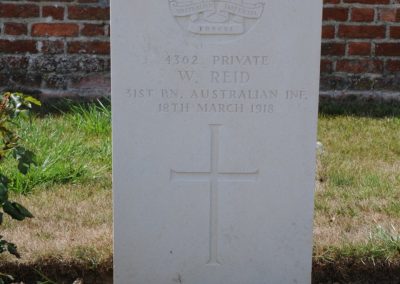 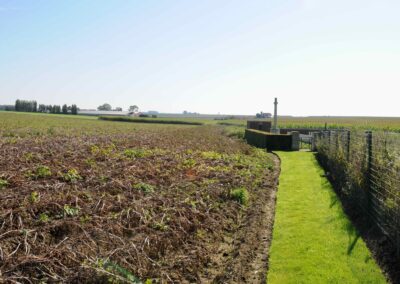 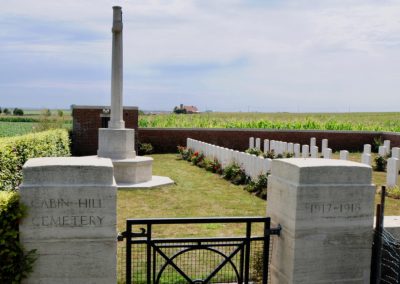 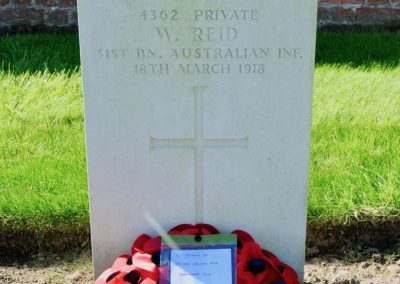 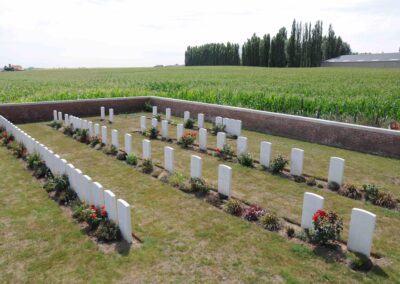 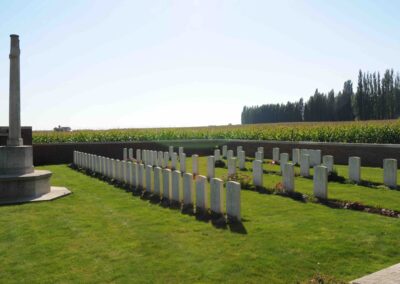 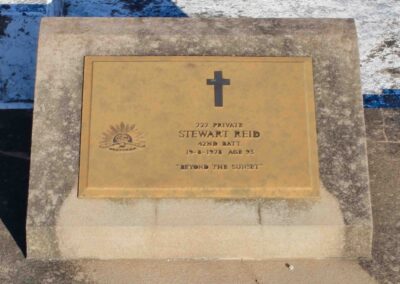 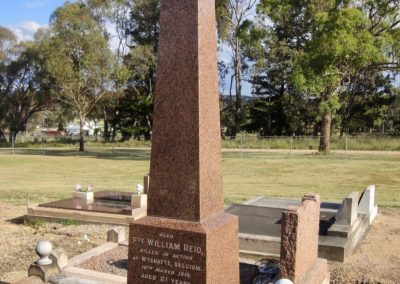 William was wounded in the left shoulder during the fighting at Polygon Wood on 27 September. He was admitted to the 6th Australian Field Ambulance before being transferred by ambulance train to the 2nd Australian General Hospital at Wimereux, on the coast of northern France. He was sent for further treatment to the Exeter War Hospital, England. William recovered and was discharged from hospital on 8 November. He joined the No.2 Command Depot at Weymouth and moved to the A.I.F. Training Camp at Sutton Veny on the Salisbury Plain.  He transferred to the Overseas Training Brigade at nearby Longbridge Deverill. After several months, William departed England to fight on the Western Front, rejoining the 31st Battalion in the field on 1 February 1918.

Immediately, William was back on the front line as the 31st Battalion was in the trenches in the Houthem sector to the northeast of Messines (Browning 2013, 242). The battalion stayed in the front line until relieved on 21 February when it moved to a support area at the Rossignol Camp at Kemmel. Although in a support area, the troops were kept constantly busy.

Working parties marched out for duty in freezing cold weather during the first two weeks of March 1918 (Browning 2013, 249)

On 15 March, the battalion marched back to the frontline at Lumm Farm in the Wytschaete Sector where

the sector had livened up considerably since the 31st Battalion’s previous tenure and numerous parties of enemy troops were observed behind their lines” (Browning 2013, 250).

Private William Reid was 21 years old when killed in action on 18 March 1918. Neville Browning described the events that unfolded that day as the 31st Battalion was in the line at Cabin Hill and Derry House:

On the morning of 18th March, enemy artillery batteries were engaged by counter battery fire, which effectively suppressed their fire. However, the artillery duel continued intermittently throughout the day and Privates William Reid, labourer from Warwick in Queensland and Thomas Tolley, fireman from Queensland, were killed and several men were wounded (Browning 2013, 250).

William’s older brother Stewart enlisted in Toowoomba on 2 February 1917 at the age of 31. Stewart served with the 47th and 42nd Battalions and the 12th Machine Gun Company. He joined the fighting on the Western Front in November 1917, but one month later was wounded in action. Stewart suffered a gunshot wound to the back and like William, was sent to recover at the Exeter War Hospital, England. Stewart returned to the Western Front in March 1918 and survived the rest of World War I unscathed. Before he returned to Australia in September 1919, Stewart was granted three months leave. While on leave, he returned to his parent’s original home county of Linlithgowshire, where he lived and worked as a farmer. Following World War I, Stewart returned to live in Stanthorpe. Stewart died in 1978 at the age of 93 and is buried in the Stanthorpe Cemetery.